Masters of Taste 2017 was a gourmet food lover’s dream.  I had never attended a “foodie” event, so I didn’t know quite what to expect… I’ve stood on professional athletic fields before, having sung at Citizens Bank Park, Lincoln Financial Field, and the (former) Wachovia Center in Phildelphia and at Madison Square Garden in New York City.  But never had I stood on a field, to eat!  How could I refuse this invitation when it came my way?!

On Sunday, May 7th, hundreds of hungry Angelenos filed onto the field of the Rose Bowl in Pasadena to sample the best of the best dishes that the Los Angeles luxury culinary scene has to offer.  Booths from dozens and dozens of restaurants and wineries lined the perimeter of the field, while picnic tables spotted the field interior and VIP and sponsor booths stood in place of goal posts.

The torrential downpour that descended on diners about an hour in, didn’t even make people flinch.  The food was so delicious, the wine so plentiful, the desserts so delectable, and the atmosphere so communal that even the rain couldn’t put a damper on the afternoon. 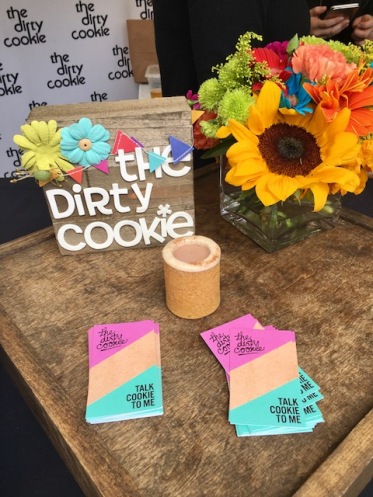 I recognized a few favorite restaurants of mine upon first glance around the field.

For example, my go-to sushi spot (aside from Nobu Malibu, of course!) was there – Hamasaku (Westwood) – serving an albacore cilantro temaki (fresh albacore, frisee, sushi rice, nori, garlic ponzu, and cilantro aoli).  It was light and refreshing, and not something I would typically order off the menu.  I usually opt for their unique cut rolls, like the “Blondie” roll (shrimp tempura, crab, spicy tuna, asparagus, avocado, soy paper, sweet soy) or the “DJ Spider” roll (baked lobster, crab, avocado, tempura flakes, soy paper, dynamite sauce).  I love the restaurant because it’s a delicious little hidden gem, tucked away in an unassuming strip shopping center on Santa Monica Blvd.

The best three restaurants I discovered, which I did not know about prior to Sunday, were:

Nerano (Beverly Hills), which served grass-fed meatball sliders topped with Provolone Del Monaco, on toasted brioche.  The slider was savory and juicy.  Chef Michele Lisi was very sweet and proud of her dish, which was reminiscent of flavors from her hometown of Locorotondo, in Puglia, Italy.

Hache LA (Silver Lake), which served a “Karma Burger” (cheeseburger with chili mayo, Karma sauce, lettuce, tomato, and onion).  It was very hearty and tasty, reflecting the Gallic-inspired menu of this French style burger “joint.”  The Karma Burger was so popular at Mick’s Karma Bar in Irvine, that owner Michael Schepers wanted to broaden the audience of this French style burger made from freshly ground steak.

Alexander’s Steakhouse (Pasadena), which served three delicate slices of Kobe beef topped with a wasabi-infused sauce, crunchy rice flakes, and a garnish.  Chef Matt Bata represented his Japanese-inspired steakhouse with what was probably the most elegant dish of the entire afternoon.

Clearly, I was in a carnivorous mood!

One stand-out restaurant of the day was not for its cuisine – which was, in fact, quite tasty – but rather, for its name – Hoke Poke (Downtown L.A.).  Naturally, when my guest commented on the clever restaurant name, the chef aptly replied, “That’s what it’s all about!”

Another restaurant that topped my list for culinary creativity, was The Dirty Cookie (Tustin).  With a tagline, “Talk cookie to me,” it’s only fitting that they served cookies shaped as shot glasses filled with chocolate milk!  Very fun and creative.

But, for me and my guest, one dish reigned supreme above all others, all afternoon:

The bacon-topped, sweet glaze donut holes, by Cafe Dulce (Little Tokyo.)  It was the perfect combination of salty and sweet – and so unique and different to the palette.  Next time I’m in Little Tokyo, I’ll be sure to stop by this specialty cafe and bakery – most well known for its coffee blends, teas, and unique homemade cakes and sandwiches.

This uber delicious dessert was the perfect way to end the day on a sweet note.  And with that, Masters of Taste 2017 was a delightful, stormy Sunday afternoon!

BMG Recording Artist & Songwriter with music featured in over 140 popular TV shows and films, songs recorded by multi-platinum artists worldwide, and a brand new single available NOW on iTunes called "What Love is All About." And a devout fan of LaLaScoop and all things LA! View all posts by carlyrobyngreen

LaLaScoop Holiday Gift 🎁 Guide is live including some of our fav finds from $5 - $100+ to spark your holiday spending and satisfy everyone on your list.
Absolutely loving this inspirational book 📕
Yesterday’s BIG meal (Chicken Ranch crepe) somewhere between lunch and dinner #linner @gabinoscreperie #crepes like you’ve never had before #gabinocreperie
So happy to get some hair help today by Galen who just opened a salon in Palm Springs called Saloniste. Most people fly to him to get their color and he once had a salon in San Francisco. This is my second visit with Gaelen, the first at his gorgeous home. Officially feeling myself again. Thank you 💇🏼‍♀️