The stench has finally subsided from the residual carnage due to last month’s sudden loss of sea life in Marina del Rey. It took a solid couple of weeks before I could bear my nose to the wind while walking beside the docks. But, the water remained impenetrable to the eye long after. Anchovies, sharks, even sea lions lay dormant, dead, thick on the sea floor. And the birds aimlessly wobbled away through the air. Sea lions vanished. Only distant echoes of barks and squawks remained for a long while. Only now are the animals starting to come back. But, my questions remain about why thousands and thousands of anchovies suddenly turned up dead.

Things we think we know:

1. There was a gigantic influx of anchovies that made their way into a small part of Marina del Rey between Bora Bora and Tahiti.

2. The death of the sea life, from anchovies to sea lions and sharks that lined the marina’s floor, up to two-feet high, is due to a deprivation of oxygen. This is evidenced by the puffed up and reddened bellies of the deceased, which is caused by an internal implosion within the body. According to NBC 7,000 pounds of sea life was lifted out of the water on the morning following the episode.

3. Although associated with oxygen deprivation, the sudden loss of anchovies and other sea life in this small marina seems unlikely to be a result of an algae bloom, as some claimed earlier. We would have seen a red or orange tide from the bloom of algae which discolors the water. And there was no such thing. In addition, it seems strange that an algae bloom would only take place in this small alcove within the larger marina. 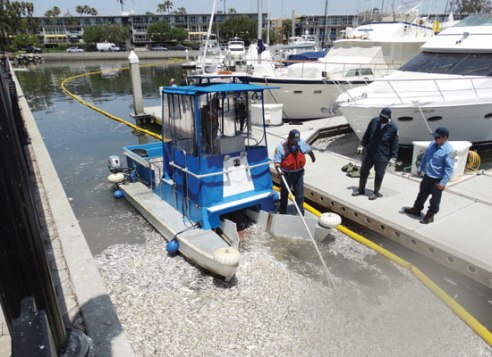 So, what ultimately caused the oxygen deprivation? Why was there a sudden influx of anchovies heading for this particular spot in the Marina? Does it have something to do with a predator influx due to Global Warming? Was it a coincidental simultaneous combination of both? Was the sudden death due to a gas leak at the end of the dock? It seems strange to me that the gas dock was blocked off only days before the fish suddenly went belly up. And did the birds, sea lions and other large sea life die for the same reason as the anchovies, or was it from the toxicity internalized from eating dead anchovies? And if that’s the case, does it suggest that something more sinister stimulated the stinky mess?

I, along with many others, first witnessed the silvery layers of anchovies, walking along the boardwalk a few weeks ago on Sunday morning, May 18th, 2014. It was shocking to see the dense layer of anchovies on the surface of the water. The sight continued down the whole quarter of a mile stretch. They were crammed against the wall, around the boats, in every possible crevice. And then I noticed the birds. The Marina is usually a sanctuary for incredible birds, reminiscent of dinosaurs. We can usually see collections of them swooping down with great force during feeding time and chasing each other in attempt to steal a catch from a beak rather than below the water’s edge. It’s an incredible sight to behold most days. But, what we witnessed that past Sunday was much different. The birds congregated in the middle of the Marina where there was some relief from the surrounding carnage. They seemed stunned about what to do for a long period of time. And, then I witnessed about 30 pelicans lock in side by side, front to back, and begin to slowly move en mass towards the upturned fish. It was as if they said to one another, “If one of us is going to get sick and die from eating, then we are going down together.” They began to pick at the fish one by one, some even attempting to spit them back out. But later that afternoon and even days after, the birds that remained in the area flew in delirium, as if being forced by a gallant wind. One lone pelican suddenly smacked into a sailboat’s high mast, breaking its neck and collapsing onto the bow, where it remained deteriorating for days. Weeks later, some sea life is trickling back. Even tiny anchovies are beginning to swim around. But, the birds and sea lions have not yet come back in full force. We deserve specific answers, not probabilities, as to why this happened. What is the full line of cause and effects? And, what will the short and long-term effects be? The stench may be gone, but that does not necessarily equate the eradication of the problem. I think we need Bill Nye the Science Guy on the case!