Following its debut at the Los Angeles Film Festival, the documentary short, Crafted – directed by Morgan Spurlock, who was previously nominated for an Academy Award – is now available for streaming on Amazon Prime Instant Video.

Attendees to the June 17 screening at Regal L.A. Live were able to participate in a panel discussion with Morgan and the film’s craftsmen, moderated by Henry Rollins. There was a reception after with ice cream from the new Haagen-Dazs Artisan Collection. Some flavors of the new collection include banana rum jam, ginger molasses cookie, applewood smoked, and more! The film was commissioned by Häagen-Dazs. 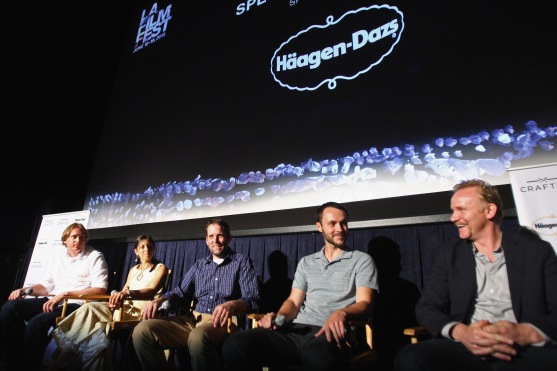 Check out the film’s trailer. Crafted explores the evolution and shared philosophies of the modern artisan, uncovering what drives them to create and why their craft endures in the modern age.

“Creating high-quality products that hold meaning – from making food to crafting tools – takes a relentless level of commitment and passion, particularly in our society where disposability reigns supreme,” says Spurlock. “I am thrilled that the stories of the five artisans in Crafted are now available for everyone to watch.”

Spurlock ventured to the trenches of these craftsmen who vary by trade and geography, but all share a passion to create. He takes viewers on a journey to meet five craftsmen who challenge themselves to make handcrafted goods that set them apart from the rest:

Crafted was produced by Spurlock’s Warrior Poets Productions and is distributed in the U.S. by Kinonation. Visit CraftedLikeNoOther.com to watch the official trailer, find more information on the documentary film and learn how to get a chance to win artisan-crafted prizes from the stars of the film, including a trip for two to San Francisco to dine at Bar Tartine, by sharing the movie trailer on Facebook or Twitter.