The 12th Annual Desert Smash After-Party took place in Palm Desert on March 8th. If it wasn’t for work and the absence of a private jet, I would have been there in a hot minute! Talk about a perfect Birthday celebration! Tennis at Indian Wells, music, celebrities to create a high-profile tennis fundraiser on the eve of the Indian Wells Tennis Tournament. This sell-out event is truly the only place where tennis ever really meets Hollywood! 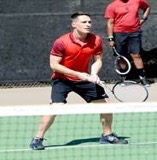 For the past three years the Desert Smash has benefited Will Ferrell’s charity. Last year none other than Justin Bieber came out to play, along with Kevin Hart and other fans of Will. This year St. Judes Children’s Hospital was the benefactor to help them continue to “lead the way the world understands, treats and defeats childhood cancer and other life-threatening diseases.”

Grammy nominated artists Cody Simpson (who took on a few rounds of pink pong in the Paramount VIP Lounge, Ja Rule (who apparently needs a couple of lessons on the court to get his USTA ranking up), Natasha Bedingfield, DJ Posso and DJ Bob Sinclar took the stage by storm for the After-Party. Additional celebs spoted at the Smash were Sia, Hillary Swank, Chelsea Handler, Colton Haynes, Amaury Nolasco, Jack Falahee, Jason Collins, Justin Chambers, Boris Kodjoe, Alan Thicke, Shaun T., Tim Bradley, Heather McDonald and Perry Reeves. Tennis pro’s such as Agnieszka Radwanska who is #3 in the World, Fernando Verdasco, the Bryan Brothers who hold ATP World #1 in Doubles, Victoria Azarenka, John Isner, Sam Query, Kevin Anderson, Taylor Fritz, Mackie McDonald, Bruno Soares, Jamie Murray, Nicolas Monroe, Mackie McDonald, Jan Michael Gambol and Vince Spadea warmed up the courts and spread the love. Following Boris Kodjoe’s set, he was even spontaneously serenaded with a version of “Happy Birthday” from fans. Next year….no matter what, LaLaScoop is there. Get it on your calendar for 2017, and we’ll see you getting crazy at the courts and after party!