The founder of ChefDance, Mimi Kim, began the event 15 years ago after attending the Sundance Film Festival and realizing that all events only featured passed appetizers. She wanted to provide an opportunity for attendees to enjoy wonderful food along with the film festival. Her first event featured Chef Tyler Florence, and she hosted 50 guests in her own Park City home. Mimi realized there was a demand for a sit-down dinner event when other attendees contacted her asking about Chef Florence’s meal. From there, the event blossomed. Mimi realized she could not entertain the growing number of guests in her own home, so the event moved to a commercial space. The event grew to as many as 250 attendees. Mimi soon realized the value of a more intimate dinner setting and has since decided to limit the number of attendees to 150.

Mimi passionately prioritizes food within the Sundance experience. ChefDance is one of the most exclusive Sundance events and features a different renowned chef each night over the course of five nights. Mimi prides herself on featuring quality chefs, and this year is no exception! Michelin starred Chef Luigi Fineo, TopChef finalist Brian Malarkey, and Food Network personality Beau MacMillan will be serving their signature dishes. One of the highlights of ChefDance 2018 is Day 3’s 49 Remarkable Women and One Really Cool Dude event which will feature female powerhouses including women’s rights attorney Gloria Allred, Weight Watchers CEO Mindy Grossman, and more.

As an Angeleno, Mimi wanted to bring a bit of the ChefDance experience to L.A., which inspired her to host this ChefDance preview event at her gorgeous estate in Hollywood. The event perfectly whetted appetites for the official events in Park City, Utah. The night featured a stellar meal by Michelin starred Chef Luigi Fineo, who will also be orchestrating one of the dinners during ChefDance. Chef Fineo began the meal with a rare-cooked salmon, followed by a piece of steak topped with a quail egg. The most decadent dish of the night, smoked gouda mac and cheese, followed. The highlight of the meal was the truffle risotto. As most risottos can be too mushy or undercooked, and truffles tend to overwhelm dishes, I was skeptical of how much I would enjoy the dish. The rice was perfectly cooked, still slightly firm with the perfect amount of softness and creaminess. The shaved truffles perfectly accented the flavors of the risotto, rather than overpowering the other flavors of the dish. The meal ended with a selection of apple, blackberry, pecan, and lemon mini tarts. 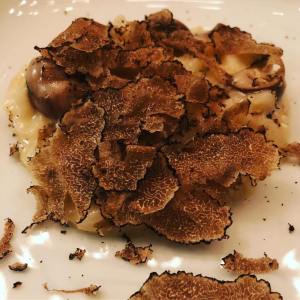 Mimi was buzzing around the dining room the entire night, socializing and spreading the word on the other events she has organized, including more intimate and themed Storyteller Dinners that are held throughout Los Angeles. This year marked another major milestone for ChefDance- they have been named an official Sundance partner, which is an incredibly rare achievement. And Mimi has grand plans to expand ChefDance to other film festivals and to continue developing new events. When explaining her initial drive to create ChefDance, Mimi explained that she has an almost insatiable desire to feed people delicious food- and with sold-out events across the country, it’s clear there are plenty of stomachs ready and willing to eat!

Pasta pasta pasta!!! So fantastic here you might be disappointed by any other pasta elsewhere except for Italy 🇮🇹 @uovopasta #vongole #creamdiparmigiano #ragu #pasta #uovopasta #marinadelrey #pastalover #pastapasta #pastalovers #homemade #tortellini #Italian
Will you try pasta from Bologna, Roma, or Classico!? Uovo Pasta Bar has expanded to the Marina from Santa Monica and Mid Wilshire. So delighted to try their tasting menu today. Opens to the public Monday with the same Italian style pasta made with deep yellow Italian eggs. @uovopasta
Happy 45th Birthday 🎂 Husband ~ what a day! Omakase menu at Nobu for lunch. Drinks at SoHo. Dinner at our pad thanks to @tramontomalibu with family @drlisabenya @michaelmccauley_ @curedailymalibu + Uncle Ed 82nd! Exhausted. 😆 🎂
Shiseido Ultimune Dinner with Roxette Arisa. Dine and dish skin secrets. Thank you @shiseido @noburestaurants #nobu ~ So fun to be at an event again! And hilarious to be sat at the head of the table. Loved meeting new friends over 😋 Nobu sake 🍶