Although located about 90 minutes from Chicago or Madison by car, and within driving distance to Milwaukee and other notable destinations, Rockford is absolutely a notable city in its own right. Offering the world far more than Rock & Roll Hall Of Fame act Cheap Trick and legendary women’s baseball team the Rockford Peaches, Rockford has just about everything one would expect from a small city. 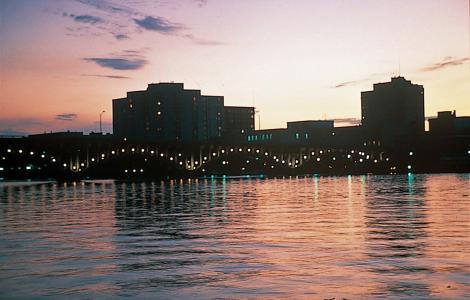 Beyond its own regional airport (Chicago Rockford International Airport), for starters, Rockford has an arena (BMO Harris Bank Center), theaters (Coronado Performing Arts Center and the Starlight Theatre), craft breweries (including Prairie Street Brewing, Urban Forest Craft Brewing and Carlyle Brewing), minor league sports teams (baseball’s Rockford Rivets and hockey’s Rockford IceHogs), a Japanese garden and its fair share of colleges and corporate offices. On top of all that, rumor is that a casino coming to Rockford in the near-future, as co-owned by Cheap Trick guitarist Rick Nielsen.

I had the pleasure of visiting Rockford for a 48-hour stay — Friday night through Sunday night — and had the chance to experience not only a lot of excellent food and drinks, but also sites and destinations all over the city. Below are 10 places I hope to visit again if returning to Rockford later this year.

Known as “Rockford’s only build your own burger restaurant,” 15th & Chris offers some of the most creative burgers that you will ever hear of. 15th & Chris’ menu also has wings, sweet tater fries, pasta salad, potato salad, baked beans, and milkshakes on it. Chef James Purifoy — also known to locals as “Boogie” — is as accessible, interesting and fun as his burgers. If you come to Rockford without a car, Uber will take you to this stand-alone location, which is next to Penguin Foods, a popular meat market.

In 1849, an English beer enthusiast named Jonathan Peacock settled on the banks of the Rock River at 200 Prairie Street with one thing in mind: brewing his own beer using time-tested European methods and locally sourced ingredients. Many decades later in 2013, Prairie Street Brewing Co was founded by three modern-day beer enthusiasts in the very same building, employing the very same approach. Prairie Street Brewing Co offers far more than brews, including a foodie-friendly menu, house-made root beer, outdoor seating along the Rock River, a wedding-friendly, and recreational games. You can spend a whole day there with ease.

Located in Machesney Park — right outside of Rockford and accessible via Uber — Pig Minds Brewing has one of the most misleading names imaginable for a brewery. For starters, it is known to be America’s first and only vegan brewery. Its menu is full of vegan-friendly comfort food choices, while its bar is also stocked with spirits beyond its homemade beers. The brewery also offers live entertainment and a variety of themed specials. My favorite of their beers was the Vanilla Bitch Slap, which I also found served on tap nearby at Rascal’s Bar & Grill in Loves Park.

Located in downtown Rockford at the intersection of Water Street and Market Street, the Rockford City Market features local vendors, live music, demonstrations and family-friendly activities. Held each Friday night for 20 weeks of the year’s warmer months, Rockford City Market is the sort of place where you can socialize, stroll casually, and/or have dinner and/or drinks. My personal favorites were Velvet Robot Coffee — which is in the process of opening a physical location — and the Disco Chicken truck. Interestingly, Disco Chicken is operated by is affiliated with Chef Paul Sletten, who also oversees Abreo, Social, and Taco Betty’s, all of which within walking distance of the market.

Which seat is your favorite?! We always like to say, there isn’t one bad seat in the house!⠀ ⠀ ⠀ #gorockford @gorockford #rockfordil #rockford

There are classic theaters, and then there is the Coronado Performing Arts Center. Opened in 1927, the Coronado got a $18.5 million restoration — as funded by local supporters — between 1999 and 2001. A world-class facility that has been host to performances by The Marx Brothers, Frank Sinatra, Bob Hope, Louis Armstrong and Blue Man Group alike, it is the rare facility that can properly host orchestra, Broadway musicals, rock bands, comedy shows and galas. Also of note about the Coronado is that it has preserved a lot of its original furnishings and production equipment, also giving attendees the feeling that they are part of a performance within a performance.

I drink a lot of coffee. But sometimes it becomes challenging to find a brand of coffee that you can love the taste of and also get behind from a philosophical viewpoint. Fire Dept. Coffee, as founded in Rockford, is both run and made by firefighters. The brand not only donates a substantial amount of its profits to firefighter-related causes, but it also provides free coffee to a lot of firehouses. The growing brand recently expanded with spirit-infused coffees and is currently in the planning stages of its first retail cafe location.

The Irish Rose is a cozy downtown Rockford spot that serves both properly-poured drinks and preservative-free food items. At first glance it looks like a traditional Irish-style bar, yet it’s truly a place where you can have a relaxed meal. On the night I visited it I had the pleasure of seeing the local band Yes Factory, a power-pop-style rock band with two violinists out front — known as the ViolinTwinz — that truly impressed me. The night after this excellent performance, Yes Factory was due to open for the earlier-mentioned Cheap Trick, showing that they are indeed a rising band. Yes Factory or not, I do hope to return to the Irish Rose on my next trip to Rockford.

Speaking of bars with live music, the District is unique in many ways. Approaching from West State Street, District looks like your average youth-friendly bar. But when you turn the corner, you see a large park-looking parking lot with a music stage. I walked by District a few times during my trip and each time really enjoyed the band. The first time I was apparently watching an event known as The Pimps Block Party. The Pimps reminded me of early System Of A Down meets early Primus, and judging by the group’s impromptu Dio cover, there is clearly some classic rock influence for this Rockford band. If you are two blocks from District and there is a band playing, you will still be hearing the band loud and proud, which I found to be refreshing.

Just Breathe 815 Rockford Public Library One Resource At A Time is going to be amazing see everyone tomorrow 11am-1pm The Nordlof Center pic.twitter.com/KV03pmAtrL

Also on the live music end is the Nordlof Center. Part of the Rockford Public Library system, the Nordlof is a cultural venue and performing arts center. It works fine for a concert — Harlan Jefferson was performing there while I was in town — just as it would a lecture or a play with minimal production. All seats provide an excellent view at the Nordlof. And if hungry after your visit to the Nordlof, just steps away is the Octane InterLounge, which offers lunch, dinner, dessert and cocktails in a fun atmosphere.

While not yet open to the public, I had the pleasure of touring the future site of Urban Forest Craft Brewing, which carries the tagline of “small batch, high quality.” Co-founders Alex Cando — a former touring musician — and Heath Meyers have a new spot in the works that you will want to hang out at. Without giving too much away, the wood-paneling is really impressive, and as avid home-brewers, the UFCB team has plenty of planned solution for how to fix the problems that other craft breweries often encounter. Keep following www.urbanforestcraftbrewing.com for updates on when the brewery will be opening to the public.

One thought on “10 Things Not to Miss in Rockford, Illinois”

Shiseido Ultimune Dinner with Roxette Arisa. Dine and dish skin secrets. Thank you @shiseido @noburestaurants #nobu ~ So fun to be at an event again! And hilarious to be sat at the head of the table. Loved meeting new friends over 😋 Nobu sake 🍶
Tonight’s #shiseido party in #Malibu was insane hosted by @roxettearisa and 🍣 Nobu. 🥢 Thank you for having me @shiseido ~ What a great night to be alive ~ Can’t wait to try the 100 new skincare and makeup 💄 products I went home with because I’ve been loving the sunscreen line and makeup
Morning #Malibu bliss 🧘🏼‍♀️ + 💻 ✍🏽 🌊
Tonight we explored the vegan menu at Sage Vegan Bistro @thekindsage in Agoura Hills with locations in Echo Park, Culver City, and now Pasadena. We dined outside in the gorgeous plant/tree-filled outdoor atrium filled with shops and other restaurants.