While situated close to Disneyland, Universal Studio Hollywood and Los Angeles proper, Long Beach is a true city and destination in its own right. The waterfront city has just about everything that one would need in a California destination. That not only includes beaches and non-humid weather, but also live entertainment venues, recurring festivals, sporting events, breweries, shopping districts, museums and solid public transportation. 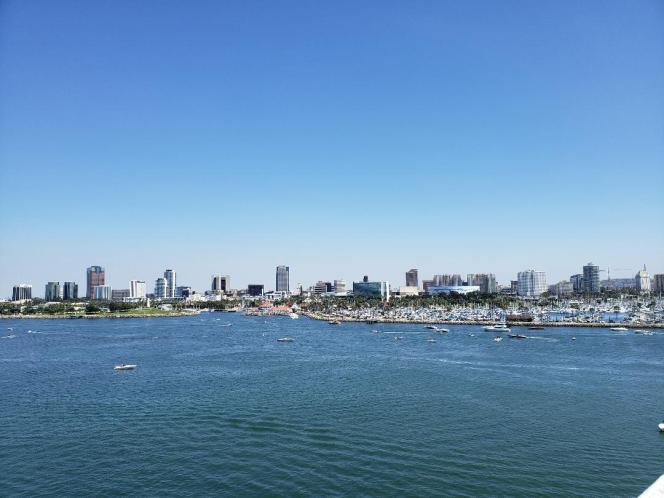 I had the pleasure of visiting Long Beach, California for a long weekend in July 2019 — Long Beach Airport offers direct flights to and from New York’s John F. Kennedy International Airport, thanks to JetBlue Airways — which coincided with POW! WOW! Long Beach. Below are 10 things not to miss when visiting Long Beach no matter what time of year you choose to visit, many of which photographed by Melissa Paltrowitz.

Michael’s On Naples, a sister restaurant of Michael’s Downtown Italian Kitchen, has been rated the #1 restaurant in Long Beach and the #2 Italian restaurant in all of Los Angeles. This location, a Long Beach favorite since 2013, utilizes fresh, locally-sourced ingredients for its hand-made pasta, wood-fired pizza, wholesome salads and grain bowls. It is situated in the midst of the energetic Promenade area, making it a convenient spot for any sort of downtown hang.

This 4th Street shopping district is nicknamed “Retro Row” because of its abundance of fun, vintage-inspired shops. Third Eye Records not only had an excellent selection of vinyl records, but also music-themed artwork and merch for sale. Salud offered a great mix of coffees and freshly-squeezed juices; its bottled watermelon juice had an amazing kick to it. Rumor has it that set designers on the classic series Mad Men utilized Retro Row for a lot of the show’s wares.

#3: Aquarium Of The Pacific

The Aquarium Of The Pacific is reportedly the fourth most-attended aquarium in the United States with over 1.5 million annual attendees expected. It displays over 11,000 animals in more than 50 exhibits; I was especially impressed to see penguins, seals and sea lions in-person. The aquarium also refreshingly offers lectures and discusses sustainability with multiple exhibits.

The Queen Mary is regarded as an “art deco ocean liner” and it has been in Long Beach for 50 years. In other words, imagine a cruise ship — as preserving the luxury and the heritage of decades’ past — that stays in one place, which you can tour and even sleep on overnight. The Queen Mary accommodates thousands of guests and has a variety of shops, exhibits, bars, restaurants and live entertainment spots on-board, in essence providing something for everyone.

Established in 1982, the authentic and original Gondola Getaway combines the old-world charm of Venice, Italy with the modern-day atmosphere of Southern California. Its gondoliers are dressed like Venice’s gondoliers and take you around the canals and waterways of Naples Island, near the resort area of the Belmont Shore. Expect a relaxing, comfortable and/or romantic hour-long ride, and feel free to come prepared with something to drink if you’re into that sorta thing.

Speaking of water-based destinations, Long Beach Waterbikes lets you ride pedal-powered water cycles along the picturesque Alamitos Bay. These bikes can go around 7 miles per hour, if you pedal steadily and have cooperative weather, and have almost no likelihood of capsizing or tipping over. In other words, they are steady and easy to operate. The wonderful staff of Long Beach Waterbikes also provided a clip-on Bluetooth speaker so that I could play music off of my phone as I biked. After close to an hour of wonderful water-biking, I was steps away from the beautiful, spacious and energizing Ballast Point Brewing Company’s tasting room, which has an extensive menu of both beers and food items; both indoor and outdoor seating are available.

Shoreline Village is a waterfront shopping, dining and entertainment center that overlooks Rainbow Harbor. It tends to be family-friendly during the day and more adult-oriented in the evening. Among its on-site attractions are an antique carousel, bicycle and watercraft rentals, harbor cruises, and specialty shops; the Native American-themed store Raindance was both unique and interesting. I very much enjoyed my dinner at Parkers’ Lighthouse, which was a recipient of the Wine Spectator’s Award Of Excellence. Shoreline Village is also in closing walking distance to the Pike Outlets at Rainbow Harbor — over 344,000 square feet of retailers — and the Long Beach location of The Laugh Factory comedy club. It is also walkable to an actual lighthouse.

George’s Greek Cafe was founded by the father and son team of George and Demitri Loizides. The restaurant’s Belmont Shore location strives to bring “a little piece of Greece in Southern California,” doing so with healthy yet authentic Greek culinary creations. I started with the lentil soup and continued with a traditional Greek salad, while my wife experienced a one-of-a-kind entree-size collection of appetizers. The service was excellent and there was nothing I would change about this experience at George’s Greek Cafe. After our top-notch meal at George’s we went across the street for dessert at Paradis, the Denmark-helmed ice cream shop which also gives you board games to play while having your the sweets of your choosing; Paradis changes its menu regularly but is always sure to include several non-dairy ice creams.

The Breakfast Bar is one of those “don’t judge a book by its cover” sort of those scenario as it is on the ground level of a Travelodge hotel. Putting that aside, The Breakfast Bar’s owners Josh and Pamela Beadel are very involved with there establishment which serves breakfast, lunch, wine and beer around the clock. Most of its dishes are recipes that came from family traditions and family cookbooks. My chicken tortilla soup was fantastic, the eggs were done exactly as ordered, and the (surprisingly-affordable) restaurant’s (funny) t-shirts are priced under $10.

The Long Beach Creamery is a fast-growing local establishment as the idea for its first location came about in 2013. Meanwhile, its third location opened earlier this year. Ultimately from the Long Beach Creamery you should expect handcrafted ice cream delights — including several non-dairy options — helmed from local, organic ingredients. When I visited the East Broadway location, I was delighted to see a specifically crafted flavor for POW! WOW! titled Golden Mallow, just in time to celebrate National Ice Cream Day. There is nowhere else I would rather go for dessert in Long Beach, California than the Long Beach Creamery.

5 Responses to “10 Things Not to Miss in Long Beach, California”