Malibu has really upped its game. You now don’t really need to leave the Bu with this addition to the new fast growing food circuit on the breathtaking PCH. The old Chart House where I enjoyed taking my dad years ago, has made a huge decadent revamp to become the sexiest, sauciest new cliff hanging spot, Mastro’s Ocean Club. Every table in this mature spot has an ocean view to dazzle your mind. There is even a beautiful indoor outdoor side lounge. Think Dukes sidebar lounge, but on a way classier level.

As the waves slowly crash nearby, you can lollygag over your meal and pray you never have to leave. What makes this place so perfect is not only the views, but the food. Known for their steak at Mastro’s Beverly Hills, Newport Beach, Thousand Oaks, and Costa Mesa, seafood is of course making a plunge at this Ocean Club.

We are still mesmerized over the food we gorged ourselves on for the media opening Thursday night. Shrimp cocktail the size of my hand (brings back memories of Oceanaire Seafood Room in DC), lobster claws perfectly cut and ready for you to devour, massive oysters from the east and west coasts, crab claws sliced for easy access, and the list goes on. Other memorable bites include the tuna tartare medley, lobster sushi, thinly sliced steak with horseradish sauce, and the “I may cry it’s so good” butter cake with a dollop of whipped cream and strawberry on top. Live tunes with a swanky singer and piano player had the crowd grooving late night.

Open to the public as of Friday, the Ocean Club will start brunch on Saturdays and Sundays as well. This is the ultimate spot for sipping a cocktail too. Besides the traditional Mastro’s fare of Petite Filet, Bone-in Filet, New York Strip, New York Pepper Steak, Chef’s Cut New York Strip, Bone-in Kansas City Strip, Bone-in Ribeye, Chefs Cut Ribeye Chop, Porterhouse,  Herb Roasted Chicken, Double Cut Pork Chop, Rack of Lamb, and Veal Chop, start with something from the ocean floor. See below for the menu delights.

Oysters On Half Shell 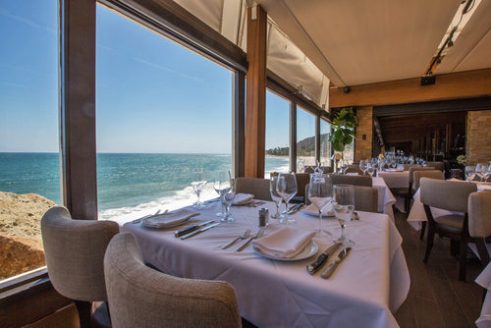 Mastro’s Ocean Club is as good as it possibly gets. This will definitely be the place to be this summer!