A glimpse. That’s what burlesque queen Lili St. Cyr offered in the form of fleshly desire to audiences, what author Leslie Zemeckis is offering in the form of a biography of the famed striptease to readers and what I’m offering in the form of this advanced report to you. Zemeckis, an award-winning documentarian and actress (and wife of filmmaker Robert Zemeckis), recently celebrated the launch of her new biography, “Goddess of Love Incarnate: The Life of Striptrease Lili St. Cyr,” with an exclusive cocktail reception at the Rockefeller Estate on New York’s Upper East Side (my invitation, it seems, got lost in the mail).

Five years of research on St. Cyr explodes onto the page in Zemeckis’ latest work. Her expertise on burlesque is on display in her previous book Behind the Burly Q: The True Story of Burlesque in America, a definitive oral history of burlesque as told by the original stars; as well as a critically acclaimed Showtime documentary of the same name; and “Bound by Flesh,” a documentary that explores the circus and carnival life in the early part of the 20th century, which she wrote, produced and directed.

In “Goddess of Love Incarnate” (Counterpoint Press), Zemeckis reintroduces the world to its most famous burlesque queen, a tall, elegant and incredibly hardworking performer who revolutionized stripping, instilling it with poise and glamour. St.Cyr choreographed witty and dramatic scenarios, including her famous boudoir and gilded-cage skits, elaborate stage sets, designer gowns, sensual dancing and her on-stage bubble baths. 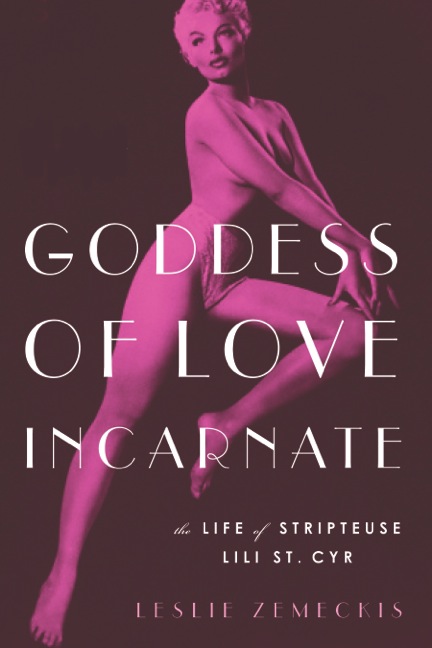 As opposed to the bawdy and low-brow performers of her era, St. Cyr’s shows left more to the imagination, and then expanded the boundaries of that imagination. The former chorus line dancer was famous, for example, for a signature act known as “The Flying G” in which her G-string would be flung into the balcony (by a stagehand with a fishing rod) at the end of her dance, and the lights would dim. St. Cyr used props to strong effect; the “Jungle Goddess” routine, for instance, incorporates a parrot that she appears to make love to. She also performed as Cinderella, Cleopatra and Salome, among others.

St. Cyr’s performances drew crowds that circled around the block, as well as celebrities, some of whom she made her lovers. But St. Cyr’s was a troubled life. She spent her fortune, engaged in torrid romances, divorced a half a dozen times and over-medicated herself with pills, ultimately attempting to take her own life.

The book separates fact from fiction, and brings the siren of the burlesque stage back to life, with provocative stories, flowing prose and hundreds of original photographs, many from St. Cyr’s personal collection. Zemeckis recreates a bygone era of American history, which served as a crucial precursor to our modern state of sexual mores, and in so doing, ignites the imagination and fills the senses.

“Lili wasn’t a story I wanted to write,” says Zemeckis, “it’s a story I had to write.