This article was posted first on WeSaidGoTravel.

Uber, Lyft, and Los Angeles‘s new metro rail have shifted the way Angelenos travel. Many people have opted to take public transportation for convenience and affordability, while some have even decided to get rid of their pricey vehicles. Now, add to the LA transportation game, a car sharing program called Green Commuter, an innovative clean energy company that will allow you to rent or carpool a Tesla Model X.

Green Commuter’s proprietary software will enable its fleet of all-electric ten-passenger SUVs to be used by thousands of workers to commute to and from their jobs during rush hour and will be offered as a car share for all Green Commuter members.

“Angelino’s understand traffic and care about the environment. We offer a premium all-electric Indiegogo car sharing campaign that’s affordable. Gasoline vanpool vehicles are very polluting, usually with ratings from 12 to 18 MPG in real life driving conditions so we’re the first to use only zero-emissions vehicles instead,” said Green Commuter CEO Gustavo Occhiuzzo.

Occhiuzzo chose the Tesla Model X for the Green Commuter program because it is the only all-electric vehicle currently available that meets vanpool criteria, including seating for seven passengers and a battery capacity sufficient for long-range driving. He said the vehicle is also ideal for car sharing because of its appeal to users who would use it for travel with friends and family around town or popular nearby weekend destinations, such as Las Vegas, Palm Springs and San Diego.

“Our goal is to provide a great vanpool and car share experience which is affordable, desirable and sustainable. We’re starting in Los Angeles, one of the most forward thinking cities in the country, but one that has great environmental challenges and congestion issues. Our members will experience a better commute or a great car sharing experience in one of the most exciting, advanced cars on the road — the Tesla Model X, while reducing their carbon footprint and alleviating congestion on our roads.” – Gustavo Occhiuzzo

Drivers who want to rent the car on weekdays will pay just $100/month for 8 hours of driving during the month, with a minimum rental period of one hour. This will be a lifetime rate as long as they continue to pay monthly with no lapses. If they need more time, they will be charged $12.50/hour. Drivers can also choose the Weekdays Plus package which provides 25 hours per month of driving for $250. Incentives from the city as well as some companies may also make this an attractive package. 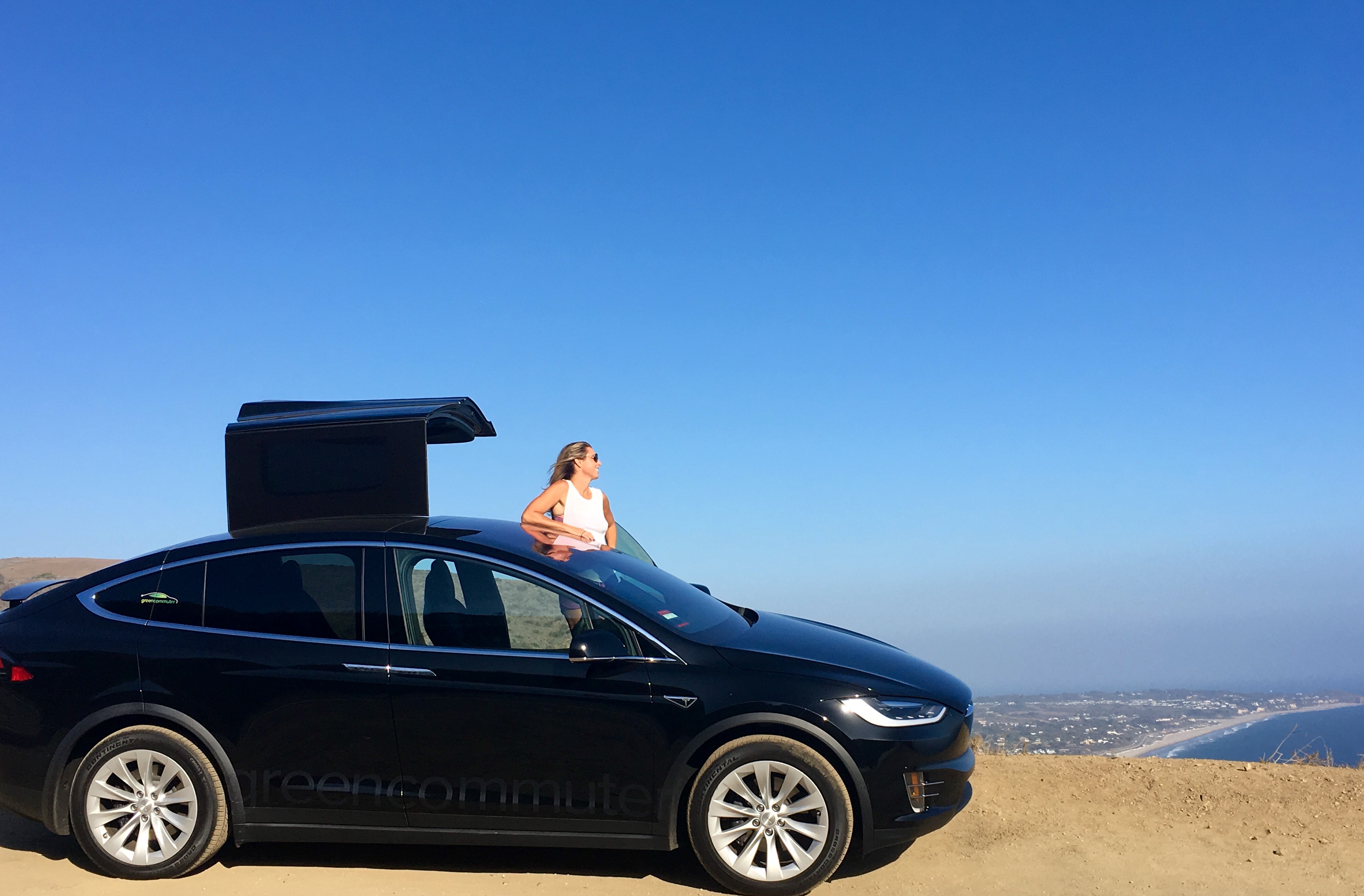 I thought about how I would use this if I did not have a car. If I needed to get to the grocery store, I would look on the Green Commuter App (coming soon) to see where the closest ride is available, then I would have to get to that location to drive the car. The next person would pick up the car from where I ended up. Living out in Malibu that may not be so easy, but living in the heart of the city may make ride sharing an easier option. Green Commuter’s goal is to allow up to 7 people an economical ride, especially for long commutes. However, I thought about this more and that would definitely involve a lot of time picking each person up, but I assume if you are commuting over an hour one way (like most Angelenos) it would make sense, especially since you could also do work on the way or even take a nap. Families or friends going on a weekend road trip may also love this Tesla X SUV option.

We had a chance to drive the Tesla X for the day. Feeling much like a mom van, I wish it had a sunroof since

almost every day in LA is sunny. The large front window that offers an unobstructed view on the sides and top feels aerodynamic and modern. The stereo system with its grand touch screen makes it easy to tap and control music choices, feeling like a massive iPhone. The back seats are roomy, but the seats in the way back would definitely only feel comfortable for a small person. You don’t really need to break in an electric car, which I found amusing because as soon as you take your foot off the pedal the car slows down. Our favorite design feature were the doors that fly open above the car like wings. Also, the door locks as soon as you exit the car and the key just has to be on you to just start the car.

Green Commuter is a just another way that companies are looking to transform the future of transportation. I predict we will see more of these electric ride share options in the years to come and eventually cars will drive us, like we may see with Uber’s self-driving fleet soon. Would you consider renting a Tesla X?