“Did anyone hear the smoke alarm?”

Renowned chef Michael Voltaggio’s asking a cocktail-attired assemblage of food writers, bloggers, phone app picture-snappers, and hangers-on seated for dinner atop the historic Roosevelt Hotel in Hollywood because, he tells us, they “just about burned the place down.”

The Top Chef winner briefly explains that there was a kitchen fire that got a little out of hand, and laments that they’re never gonna have him back. Rather than name names, he takes full blame for the incident.

Like NFL quarterbacks and film directors, chefs bear the brunt of the blame when things fail, and an inordinate amount of credit when they succeed.

And credit was the whole point of this affair last week at the city’s oldest continuing operating hotel. The rooftop has been temporarily converted into a dining patio for the occasion, the occasion being the Priceless Table, a four-course wine-paired meal to celebrate a new financial product from Capital One.

If that sounds like an odd way to usher in a new financial product, hold that thought for a moment. As Capital One looked to target an audience with incentives, they asked the question that all the giant banks and credit card companies are asking: “What do Millennial people want?” It’s not just “stuff,” as with previous, materialistic generations. Young people want experiences. And what kind of experiences do they want? For starters, a good meal with good friends. Voila, the Savor card was born, offering a cool 3% cash back on dining.

Voltaggio, covered with enough tattoos that he’s probably a pound or two heavier than he otherwise be, hardly seems like the proper spokesman for a major player in the buttoned-down financial sector. But once again, withhold judgment. With his cool vibe and rakish charm, he’s exactly the type that the stuffy suits might need to attract a demographic scorched by the global financial crisis of ‘06, and who still harbor resentment to the fat cats who were considered too big to fail. In this light, if you’re willing to repress your cynicism, the move can be seen as an olive branch. And what better way to extend an offering of peace than over the breaking of bread?

And that brings us back to the Roosevelt Hotel, where, after a small fire was extinguished, so were ravenous appetites as the chef discussed the inspiration behind the dishes that he’d prepared, which included pan-seared branzino topped with tender octopus ragu and young fennel; wagyu beef short rib lacquered in red wine and carrot juice, served alongside what he calls “charcoal” potatoes, which, in addition to having a grilled, smoky flavor, even resembled little briquettes. 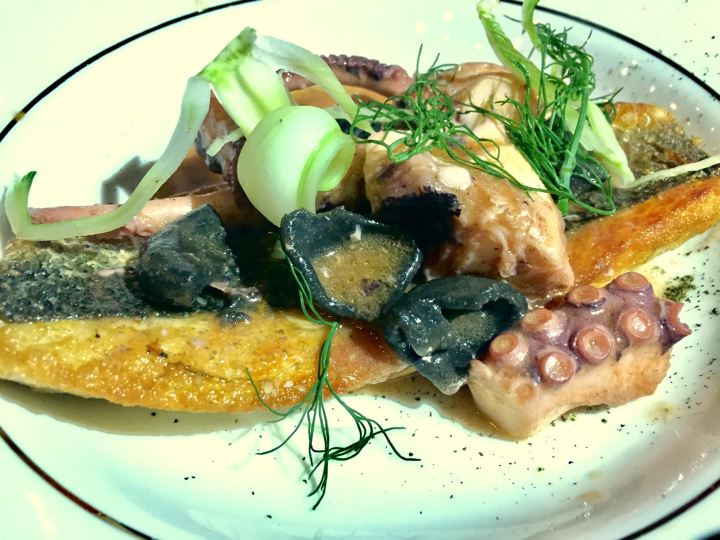 For dessert, the chef paid tribute to his mother’s homemade “dirt pie” with a Mexican chocolate pot de creme with caramelized white chocolate, mezcal caramel, and smoked chocolate “rocks,” crumbly nuggets of deliciousness that tasted nitrogen-frozen and were ably complemented by a 20-year-old Taylor Fladgate port.

And for the ability to create such a “savory” meal, Michael Voltaggio deserves credit.