The overhaul of Robertson Plaza is off to a great start. In addition to a Blue Bottle Cafe, the space also now boasts a chic new eatery. The former site of The Newsroom is now occupied by The Henry, an elegant all-day dining locale and watering hole (that could be interpreted as an “all-day watering hole,” which would be entirely too self-revealing…). 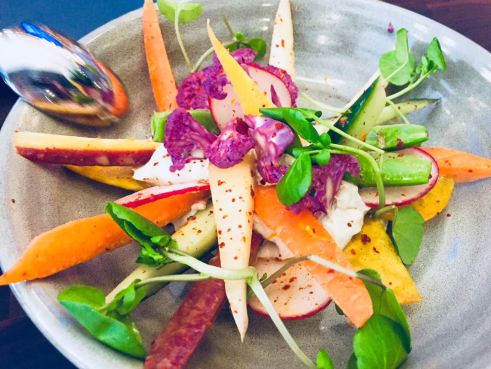 Located on Robertson Boulevard, across the street from The Ivy, the new joint will draw a sophisticated, upscale dining crowd from the posh neighborhood, and probably a few upskirting paparazzi, as well. It will likely also attract food lovers from around the city, particularly for brunch, when crosstown movement is — well, that’s a crock, who am I kidding — but when nobody’s in a rush to get back to work, anyway.

The menu is decidedly modern American, showcasing the bounty of Southern California produce, and specializing in tender meats. The Short Rib & Spring Pea Ravioli, for example, encapsulates both in a single dish. The tender, braised short rib is the perfect accompaniment to the most beloved veggie of the season, the Spring pea. There’s only a few hours in which the mashed Spring pea will keep its verdant hue before it begins to brown, so it’s something of a “canary in a coal mine-” type dish, and The Henry’s looks and tastes fresh from the pod. 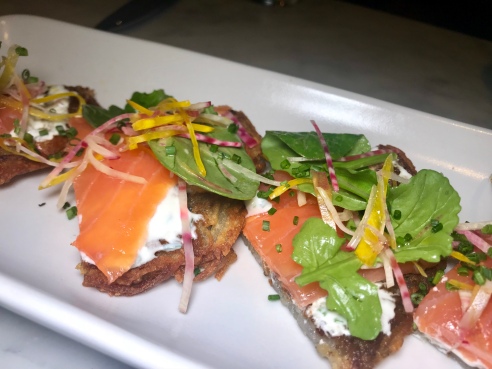 I expect the hand-carved rotisserie French Dip (with turkey or Prime Rib) to be the signature lunchtime dish (you know, that and three martinis). While the must-try appetizer, perfect for brunch, is smoked Norwegian salmon, served atop a potato hash brown, with creme fraiche and arugula. Enjoy it with a chilled glass of Champagne (and the delightful company of a brunch-loving food writer, if you really want the ideal pairing). 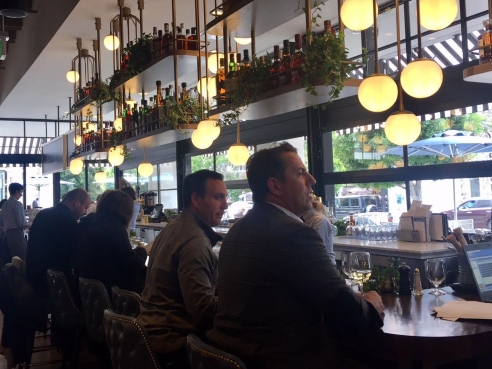 “Trust me, we’ll just drink some white wine and wait for the ladies…” (Photo by Scott Bridges)

The cocktails, meanwhile, are a testament to liquor love, with a baker’s dozen house specialties. While there are some fad faves — the blackberry bramble seems an overly adoring homage to the juice craze — there are also a few updated classics, like the Boulevardier, made with Eagle Rare 10-year bourbon, Campari, Carpano Antica sweet vermouth, and clove bitters. There’s also an upgraded G&T and a strawberry Sidecar, among other standards.

The Boulevardier under lamplight. (Photo by Scott Bridges)