Greenville may not be one of the largest cities within the state of South Carolina, yet it manages to have just about everything that a person would expect from a major city. That not only includes an airport, hotels, restaurants, and nightlife, but also an arena, sports teams, a bike-share program, breweries, artisanal coffee, main street block parties, and over 700 acres of public parks. 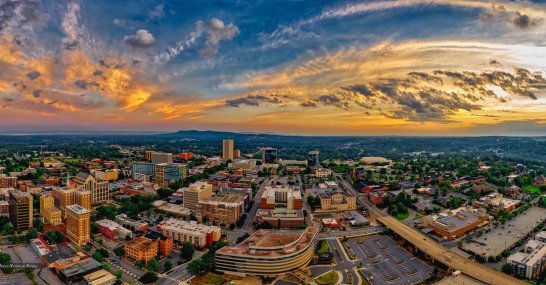 Located halfway between Atlanta and Charlotte, Greenville is also within driving distance to Nashville, Raleigh, Birmingham, Louisville, and Jacksonville. While the growing city is currently without a direct flight to Los Angeles, Greenville does currently have direct flights to and from New York, Dallas, Chicago, Denver, Detroit, Houston, Miami, Philadelphia, Vegas, and Houston. 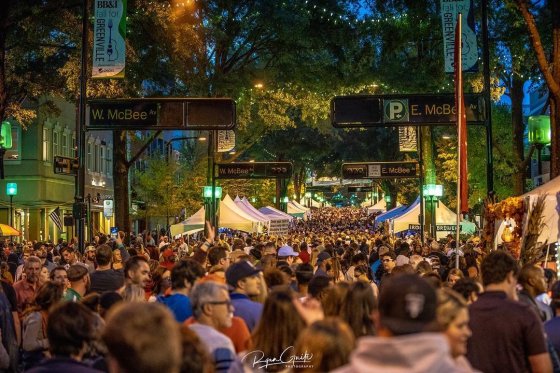 I had the pleasure of visiting Greenville for about 48 hours earlier this month, and over the course of that weekend, I had the chance to experience the latest and greatest that the city had to offer. Below are 10 things I would happily experience again if returning to Greenville, SC.

In the meantime, more on Greenville can be found online by visiting www.visitgreenvillesc.com.

Pronounced like the staple Greek dish, at Ji-Roz almost everything on the menu is made from scratch at this North Main Street spot. Dedicated to making Greek cuisine made with a Mediterranean flare, I was blown away by how authentic everything I tried was. After talking with owner (and Le Cordon Bleu Chicago alumnus) John Makkas — who was born in New York before his family relocated to Greenville — I learned that some of the menu was adapted from family recipes. If returning, I would again order the chicken lemon soup (that night served with turkey instead of chicken) to start, the flambeed saganaki to share, the menu’s lone lamb-based pasta dish with house-made egg noodles as an entree, and the baklava as a dessert. The absolute stand-out meal of my trip.

Music is and has long been one of my top interests. Collecting vinyl is something that I only got into a few years ago since I was first growing up with cassettes before transitioning into CDs. While Spotify and SiriusXM are major parts of my aural life these days, sometimes I want the experience of listening to classic music on the media it was initially created for. I stumbled upon Horizon Records as a result of my dinner at Ji-Roz — they are diagonal from one another — and wound up spending a few hours there browsing through the CDs, DVDs, and LPs, which were a mix of old, new and reissued titles. If you too are a vinyl-collector, keep an eye out for the backroom behind the register where the major bargains are. And if you aren’t into vinyl but your travel-mate is, Horizon is connected to an excellent spot for coffee and accompanying snacks.

It wouldn’t be a trip to the Carolinas without some barbecue, and luckily Greenville has plenty of options, including a few spots on the “100 Mile BBQ” list. As part of the Greenville BBQ Trail Tour — an insider’s look into the preparation and history of three local hotspots — leader John Nolan took me and a small group to experience Bucky’s Bar-B-Q, Henry’s Smokehouse, and Mike & Jeff’s BBQ. No disappointments on any level, as Nolan kept the tour moving a proper pace while the restaurants also offered very generous portions. Nolan also offers the Greenville Breakfast Tour, the International Coffee Course and the At The Chef’s Table Culinary Tour, ensuring that there is something for any foodie and/or caffeine-appreciator.

Cantina 76 is a lively, independently-owned restaurant and bar that specializes in Mexican-inspired cuisine and hand-crafted margaritas. While it has a Main Street address, it is slightly off the main road on a cool, brick-roaded side-street. Cantina 76 is entirely a sit-down establishment, yet it is both fast and casual. It is the sort of place where you could have a date-night dinner, yet also take a multi-generational family, and/or simply just hang out at like a bar with a great appetizer menu. If returning, I would immediately order the guacamole and chips to share while reviewing the menu, start with the chicken tortilla soup, pick a few tacos, and maybe have a specialty margarita or two. Los Angeles-based readers of LaLaScoop may be skeptical about eating Mexican food on the East Coast, but Cantina 76 — at the very least — gives you a warm and inviting atmosphere.

NOSE DIVE is essentially a casual gastropub and viewed as one of Greenville’s “food forward” destinations. Its chefs clearly work hard to create dishes which are both comfort-oriented yet interesting, which also makes the term “urban comfort food” come to mind. In turn, to name a few interesting picks, the menu features a “charred cauliflower & shishito peppers” offering inclusive of ricotta, a “Beyond Meat” burger, a grilled cheese with fig spread, and a candied bacon brownie. Part of the Table 301 Restaurant Group, popular sister spots of NOSE DIVE includes The Lazy Goat, Passarelle, Jianna, and the Southern Pressed Juicery.

For me, there’s no such thing as a day when I don’t crave ice cream, and fortunately, Greenville does not have a shortage of places serving milkshakes or ice cream. I stumbled upon the local Marble Slab Creamery pretty late into the evening and was surprised to find it open after 10:00 PM on a Friday night. While I would have settled for traditional cookies & cream prepared on a marble slab, I was able to order “Cookies & Cake,” in which birthday cake was melded into a cookie dough-based ice cream. Next time I go, if I don’t get a shake, I’ll try one of the hand-dipped cones and consider adding customizing a flavor with some toppings. Indulgent and wonderful.

Speaking of late-night eats, Sushi Murasaki is another spot along with Main Street strip of Main Street. It looks like a Japanese restaurant from the outside, and on the inside, it has a long bar that serves both an extensive list of spirits and the sushi spot’s full menu. So could I get a flavored Ciroc vodka and a salmon roll — after 10:30 PM — while watching baseball highlights on ESPN and receiving great bartender service? The answer is a resounding yes.

During my trip to Greenville, I had the pleasure of riding the full Prisma Health Swamp Rabbit Trail. A 22-mile multi-use trail that has received a multitude of awards, Swamp Rabbit has been called “#1 America’s Best Urban Bike Paths” by Fodor’s Travel, “#3 Best Urban Trail” by USA Today’s 10Best series, and “#12 Most Incredible Bike Trail in the U.S.” by The Daily Burn.

In addition to the Swamp Rabbit Trail, Greenville also has the Falls Park (including the Liberty Bridge), Cleveland Park (a 122-acre space created in 1922), Legacy Park (around 20 acres), Unity Park (around 60 acres on the city’s west side), and McPherson Park (which includes a mini-golf course). Overall, over 700 acres of land is dedicated to parks within Greenville.

As the story goes, Methodical Coffee opened on February 11, 2015 with pennies in the bank yet a line out the door that stayed out the door until the store closed. Owned by David Baker, Will Shurtz, and Marco Suarez, Baker handles the operations, Shurtz is the roaster and coffee leader and Suarez designs the brand and experiences. I had the pleasure of trying the Cold Brew Horchata and was very impressed by both its taste and its originality. Great service on top of the wonderful drink.

Last but not least is the SIP Whiskey & Wine Bar. Located on the top floor of a modern office building you may have otherwise walked past, SIP not only offers whiskey and wine, but tasting pours and small plates. It has a rustic wood and barrels-centric decor to its indoor spot, while its outdoor balcony — which featured great acoustic live music during my visit — has more of a hip Brooklyn rooftop vibe to it. You may wait a few minutes for the elevator, if you are much into walking up a few flights of stairs, but SIP is worth the extra effort.