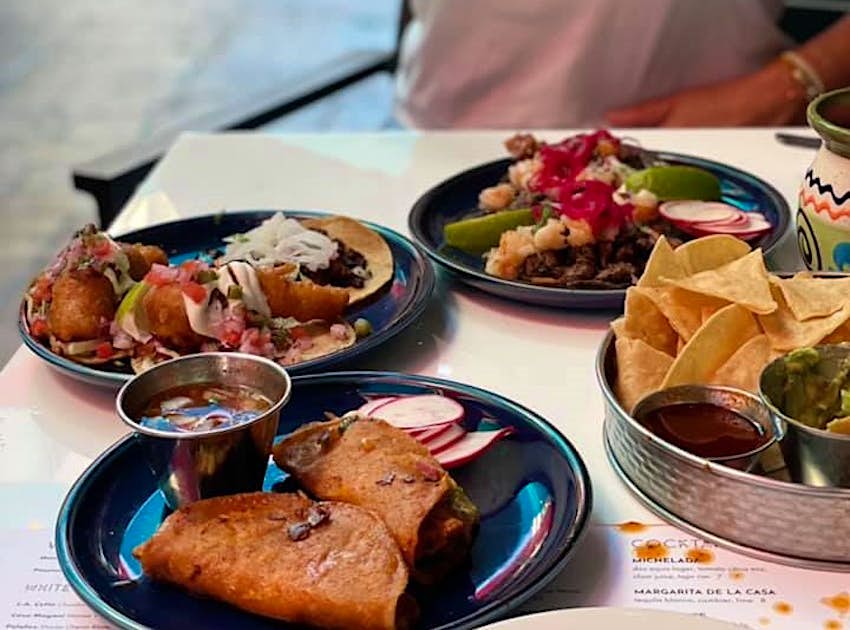 Tacos are a Southern California way of life. For many Angelenos, searching out tacos is a love affair – and often a quest to sample as many varieties as possible.

LA has one of the most exciting taco scenes in the US, so no matter where you end up, you’ll find street carts, trucks, taquerias, restaurants and temporary pop-ups putting their unique spin on this fast-food staple. Looking to sample the best of the best? These are our picks for the top tacos in town.

Inspired by Mexican taquerias, the lusciously soft and chewy flour tortillas at Loqui hold an addicting blend of mushrooms, beans, cheese, guacamole, onion, cilantro and salsa. The pork, beef and chicken are delicious too, but meat lovers may find themselves regularly running into Platform LA in Culver City just for these fungi. (There are also locations in Playa Vista and Downtown LA.)

With crispy-seared skin doused with cabbage slaw and chipotle cream, the branzino taco will be the reason you return to this cozy cantina in the Beverly Grove/Fairfax district. Tacos may be a bit pricier than the street vendors, but you can bring your own suds or tequila and gorge on other notable variations, including lobster, pork rib and chicken tinga.

Make the most out of every adventure with help from our weekly newsletter delivered to your inbox.

While you may come here for craft beer or to watch a game, this food hall in Torrance also has four restaurants. Satiate your hunger with two hefty beer-battered fish tacos in soft flour tortillas, with shredded cabbage, spicy crema, cilantro and lime, plus black beans and rice on the side. Pair your taco feast with a Michelada, featuring the Li’l Mexi lager from George Lopez Brewing Co. with chamoy and Tajín on the rim.

LA chef legends Susan Feniger and Mary Sue Milliken opened this beachy canteen and Mexican pub in Santa Monica, and its sizable taco menu has many standouts, like slow-roasted lamb birria, chorizo, beef barbacoa and steak and shrimp. But the Socal dobladita is a tastebud explosion.

Created with Chef Gio Lopez, who first tried it in Jalisco, this signature bite is a blue-corn tortilla overstuffed with roasted corn, kale, veggies, caramelized onions, cheese, chipotle aioli and house-made barbecue potato chips. Look for happy hour deals from Wednesday to Sunday between 3pm and 6pm, and Taco Tuesday specials all day.

In 2020, KCRW named this Tex-Mex kitchen’s flour tortillas the best in Southern California, and you can watch the crew turning them out on site at all four locations, straight from buttery balls of dough to warm and puffed on the griddle.

Start your morning with the Pecos – slow-cooked brisket with eggs – and add cheese, or dip the whole taco in queso. The Tijuana Panther steps it up with shredded brisket, queso and crispy potatoes, though with options like the Guadalupe
(chorizo, eggs and cheddar) and the Blanco (organic egg whites, shiitakes mushrooms and Monterey Jack), the all-day tacos might be just the hope you need.

Move over Impossible Taco: plant-based “beef” and “chorizo” from Abbot’s Butcher is available at all four Chicas locations, and the pool-deck taco stand at the Soho House in Downtown LA. Add the first Whole30-approved plant-based meat to any menu item, or order the crispy taco with ground “beef” and nondairy cheese, iceberg lettuce, radish slices and citrus vinaigrette on a corn tortilla. Expect a better alternative-meat taste without soy, canola oil or additives.

In Topanga Canyon, find street-style tacos at this colorful roadside stand with picnic tables. While thick mini tacos heaping with fresh shrimp, salmon and grass-fed carne asada are pleasers, vegans will appreciate options like hibiscus stew, soy-chorizo potato and yuca cassava. Add an order of fried plantains with black beans and cream that tastes like dessert. The stand pops up three days a week from about 4:00pm to 8:00pm; check ahead for dates and times.

Follow the mesquite smoke to this backyard operation in Highland Park, where thick cuts of seasoned chicken, mild chorizo and carne ranchera are grilled and served in crispy-cheese-coated blue-corn tortillas, topped with chunky guacamole, onions, cilantro, crema and cotija. (Vegans can delight in this multi-layer taco too with Soyrizo.) Check ahead for times – they often pop up on weekends from 3:00pm on.

At this lively new cantina at the Original Farmers Market, an LA landmark in operation since 1934, tortillas are made fresh to order with masa and Maseca corn flour, then filled with crispy avocado, chipotle aioli, marinated kale, corn salsa and pickled red onions. Not just for plant lovers, the batter used as the “meat” packs a lot of flavor.

Continue your feast with the braised-beef queso taco – similar to a beefy quesadilla with chili-beef dip – or the pan-fried crispy dorados (golden tacos), stuffed with Soyrizo and vegan cheese or tomatillo chicken and cheese.

When in Venice, walk over to this vibrant patio for inventive mezcal cocktails and drool-worthy tacos, like the memorable pork-belly chicharron with cilantro emulsion and pineapple salsa – the crispness of the belly combines with the fat and meshes with the fruitiness to delicious effect. Other tacos to try: blue-corn tortillas filled with tempura sea bass, Mediterranean octopus and roasted squash.

This old-school, unpretentious, family-run Mexican classic has three locations in LA, and a massive menu of Puebloan favorites. Locals flock for breakfast burritos, mahi-mahi tacos and chilaquiles, but our heart was won early on with the asada (grilled meat) hard tacos – loaded with guac, shredded lettuce, sour cream and shaved cheese, and so crunchy they fall apart. Use the crisp shell to scoop up the remnants. (Tacos can be also filled with chorizo cheese, fried fish, potato and more.

Chef Angie Lee’s menu showcases ingredients both inspired and influenced by a road trip from Baja California to Santa Barbara, and she’s created her own Baja-style taco, with lighter tempura-battered shrimp layered with cabbage-cilantro slaw, pico de gallo, aji amarillo aioli and crema, then topped with cotija and cilantro. Book a staycation, or just stop by to snag rooftop poolside tacos.

While you may fall in love with the Black Pastor tacos, or the pork, beef and octopus sizzling on the spit, Evil Cooks also features dessert tacos.

La Bruja melds flan, coconut candy and polvorón (a Spanish shortbread) on a hybrid tortilla – aka baby crepes with orange peels and mint – and the churro-cheesecake taco adds cheesecake and strawberries to everyone’s favorite Mexican dessert. Discover them at Smorgasburg LA and various LA pop-ups, where they will surely kill your appetite.

Straight outta Compton, Juan Garcia brings his fourth-generation family recipe from Jalisco to Smorgasburg LA on Sundays and Echo Park on Saturday nights, plus other pop-ups around the city. The Goat Mafia’s birria is a meaty stew simmered up to nine hours with local goat, dried chiles, chocolate and California oranges, served in a homemade taco with a bit of crispness to the tortilla. Ask for the birria mulita if you want griddled cheese on the inside of the taco.

The carnitas (slow-cooked pork) at Los Cochinitos remind us of some of the best in Mexico. All of the pig is used and chopped fresh in front of you, so you can pick the bits you want to try – like tripe, stomach, cheeks, tongue, heart and skin – or ask for a mix. Top the tender, juicy meat with onions and cilantro, and some spicy salsa if you wish.

The Mexican-style street tacos from Brothers Cousins will make you contemplate a move to La-La Land if you don’t already reside there. Step in the moving line and appreciate the sensory experience as the juicy, tender al pastor turns on its pineapple-topped spit. You can try it in a taco, or in a burrito stuffed with cheese, pineapple and potato. Select your salsas, toppings and condiments (yes to avocado sauce) after you order.

Most days you’ll find this outdoor setup off Sawtelle Blvd outside Rite Aid, from around 6:00pm to 11:00 or 12:00pm. You’ll pay less than $2 a taco, but bring your bills because it’s cash only.

In 2012, on his Travel Channel show, Anthony Bourdain dined at this affordable family-run taco and burrito hut, devouring petite chicken and steak tacos and the famed chorizo-potato breakfast burrito – and giving the almost-30-year-old Atwater Village institution his stamp of approval in the process.

Expect lines for bean tacos, potato tacos and rolled breakfast burritos that will transport you to Mexico. Cash only; many choose to eat and sit on the curb.

Not only do Angelenos obsess over this legendary seafood truck on East Olympic Blvd, but celebrities often rent it out and rave about the tacos dorados de camarón – corn tortillas filled with shrimp and deep-fried, then dressed with avocado slices and smothered in cool tomato salsa.

For 20 years chef-owner Raul Ortega and his team have served tacos, tostadas, ceviche and aguachile. They have expanded to four trucks; find them in Boyle Heights, Downtown LA, Pomona and West LA/Mid City.

You might also like:
The slice is right at these 10 spots for pie in the US
Ultimate eats: the world’s top 10 food experiences for 2022
Eat your way through these 8 unexpected US foodie destinations