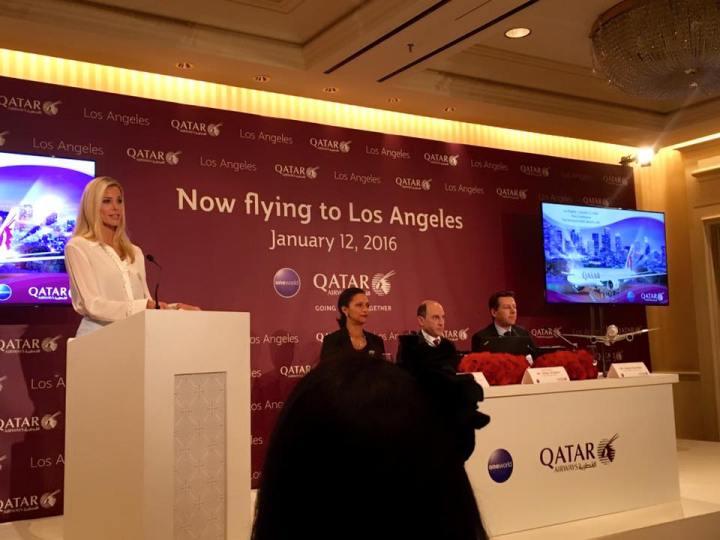 “We already have high load factors. We are attracting them on the world’s best airline.” – His Excellency Mr. Akbar El Baker

It also became clear that they hope to strengthen ties with the Unites States. Out of 8 US gateways, Los Angeles is the first west coast gateway. Qatar Airways’ average fleet age is only 4 year old and they acquire a new aircraft every 10 days. The first A350 to fly to the US will arrive in Philadelphia. Some of the perks of this refined chic airline include the following: fine dining, the ability for a 6 foot 4 inch person to fit comfortably in first class, new entertainment systems enabling more than one show or device to be used, unlimited alcohol that you don’t have to pay for served in a social area, and a special kids channel.

Mr. Akbar El Baker also proudly shared that the Hamad Airport in Doha, Qatar boasts some 70 retail outlets, 30 cafes, first class hotels, and one of the best connecting time for flights – under 30 minutes. The mosque in the airport’s courtyard that looks like a water bubble blends with the architecture. Mr. Akbar also divulged a new airline seat is being developed for Business Class and that he is responsible for overseeing every detail from the color, quality, and material. This luxurious seating will be released at the end of the year with a new special economy class seat being developed next.

Did you know Qatar Airways is a Member of One World and in 2022 FIFA World Cup will be held in Qatar?

When the LA Times questioned Mr. Akbar El Baker about his concern with the investigation with the Middle East skies and whether the Middle East’s three biggest airlines should be stopped. His response below:


For more information, read Should the growth of the “big three” Middle Eastern airlines be stopped in any way because they’re not run entirely as for-profit businesses?