Two ounces of Hennessy VSOP, three-quarters of an ounce each of Cointreau and fresh-squeezed lemon juice. Shake over ice, strain into a sugar-rimmed martini glass and serve up. Voila! The Sidecar. Is there a cocktail so simple, yet so elegant; so refreshing, yet so intoxicating?

There are a variety of other cognacs and orange liqueurs you can substitute (Here’s a good analysis of the latter), but I find this to be an ideal pairing, and presented on a silver tray at sunset, a perfect way to let go of the cares of the day.

My passion for this classic cocktail recently led me to investigate deeper the unique spirit that is only produced in a rustic region of western France. Cognac is, as you’re probably well aware, brandy. But there is no brandy of this quality in the world. And you’re about to find out why. 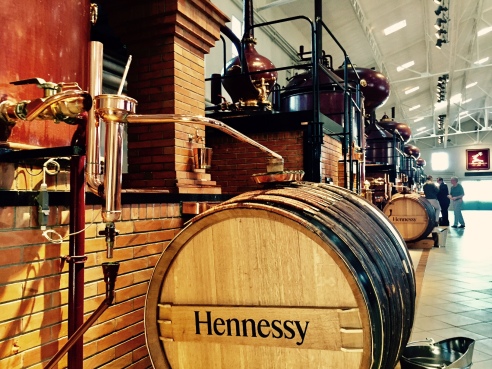 The Hennessy Distillery: A showcase of the time-honored art of distillation, where modern science meets family tradition. (Photo by Scott Bridges)

So, what is cognac exactly? Well, for starters, and unlike most other spirits, it is made from white grapes with dryness and acidity, such as the Ugni Blanc, aka, the Saint-Emilion, a common local variety that doesn’t make for a very good wine, but is ideally suited for distillation.

The juice will spend a few weeks fermenting while native strains of yeast convert the sugar content into alcohol. There are strict legalities, with regard to the production of Cognac, dating back centuries, and one of the strict prohibitions involves the addition of sugar.

The fermented juice is then distilled twice in copper stills, and once again, French law has certain dictates even to the shape of the still, even the heating method: fire. Electricity is forbidden. The clear liquid resulting from distillation is called eau de vie, or “water of life,” and runs about 60% to 70% alcohol. It will age in French oak for at least two years, legally, but generally longer. As it interacts with the oak and air, the alcohol dissipates, eventually bringing its content down to about 40%.

Master tasters, such as Hennessy’s Olivier Paultes,will then marry multiple varieties of eau de vie to obtain a distinct flavor profile consistent with their particular brand, much the same way that whiskey (Johnny Walker, for example) is blended to achieve the same taste year after year. To be fair, there are single-vineyard cognac producers which create a non-blended variety akin to a single-malt whiskey, but the major houses blend their cognac to achieve consistency. 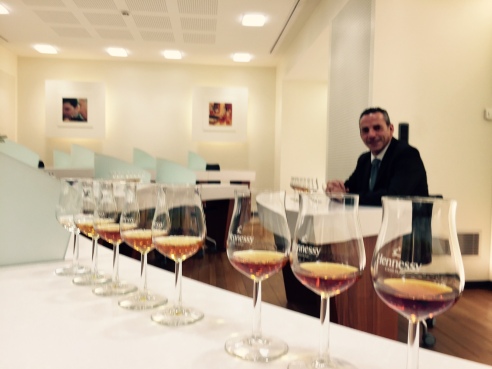 To achieve consistency, daily tastings are held about 11 a.m., when the palate is at its most articulate. Seventh-generation master blender, Yann Fillioux, explained to me that a small group of tasters, including an apprentice or two, will sit around his desk, sipping up to 50 or more samples at a time.

The quality of the eau de vie as it ages will determine its ultimate time in the barrel, and will receive a rating that designates it thus. A V.S. (“very special”) implies a brandy in which the youngest component of the blend has spent at least two years in cask; V.S.O.P. (“very superior old pale”), four years; and XO (extra old), 10 years.

Seventh-generation master blender, Yann Fillioux. At 11 a.m. each day, he and Hennessy’s finest tasters will select cognac at this very desk. (Photo by Scott Bridges)

And now, as you enjoy the delicious zing of your Sidecar, you’ll appreciate it just a little more with the understanding of the one-of-a-kind spirit that delights your palate and awakens your senses.

In fact, if you want to take your cognac appreciation to the next level, pick up Hennessy: A Toast to the World’s Preeminent Spirit, an often humorous, always insightful coffee table book set to launch Feb. 14, written by Glenn O’Brien and illustrated by Jean-Phillipe Delhomme. The book examines the brand’s 250-plus history and is loaded with classic cocktail recipes.

Additionally, the book features interviews with, among others, Yann Fillioux, who discusses the 200-year-old relationship between the two families at the heart of the Hennessey legacy. It also includes interviews with Shepard Fairey and Futura, who discuss the company’s collaboration with street artists in promoting the art form.