This article was previously posted on MoneyInc.com.

Tourism is booming, expensive not-so-stellar hotels are full, and AirBnB now offers rentals. Now that the government has allowed Cubans to rent more than one room and open up paladares (family run private restaurants), the spirit of enterprise is fully evident. Everywhere you look a blue government sign is on everyone’s door showing that their casa particular has a room or several rooms for rent. Paladares are popping up with locally sourced ingredients changing the dilemma that all one can find to eat in Cuba is rice and beans.

However, Cuba feels like a dystopia, raw, gritty, and timeworn, although surprisingly safe. Visit Cuba to get to know the people and the culture. Americans, curious and fascinated, want to travel to a country that has been for long so off limits, but so close to our shores. We want to go to Cuba to see a country that has remained unchanged with its squeaky preserved 1950’s cars, lack of internet, crumbling buildings, coupled with the devastating or maybe not so devastating effects of a crippling dictatorship and long time embargo, but Cuba is not a museum and the people deserve a future, one where they can own an iPhone and work at a job they enjoy for more than $20 a month. Now that Americans can travel freely to Cuba, plan your trip carefully in this dilapidated and dignified city.

How does one prepare for a trip to Cuba?

Get a lot of rest ahead of your trip because the country may leave you maddeningly exhausted. Old Beds and busted cars may break your back and leave you sleepless. The transportation long distances or streets alone can make you sick or sore, from potholes, fumes, and dust.

Skip the shared taxis called collectivos and take the Viazul bus for long distances. The Viazul is an air conditioned bus we later learned was way cheaper and more comfortable, about $12 from Havana to Viazul. Show up early and most likely there will be a seat for purchase. We made the mistake of taking a collectivo from Havana to Vinales, as well as from Vinales to the beach —. The lady we were staying with called and booked it for us so we didn’t think twice. After feeling stomach sick the night before, taking a crumbling almost nailed together hanging by a thread automobile with 4 other couples smooshed in back over potholes may be charming and feel authentic at first, but for over two hours with fumes and dust twirling in your hair and lungs (and no bathroom in sight), you may feel broken.

Before leaving the United States, download the App Maps.Me (MapswithMe) and remember to download the map of Cuba before you leave. Since you won’t have WIFI, we could map each place we researched ahead of time (including restaurants and bars) and flag them on the map even while in Cuba. This was so helpful when exploring areas on foot for hours. Since internet is impossible, except for at a couple hotels ($7 for 20 minutes), research ahead of time everywhere you want to go, especially the paladares, restaurants with great cuisine that are really for the tourists. Most Cuban people can’t afford to eat at these locales but you will want a break from the grit to eat a good meal at a decent restaurant.

Download the offline translator App called Translate before you leave or it won’t work in Cuba, in case you need to converse or ask a question in Spanish. The App will translate English into Spanish and speak it aloud from your phone.

Use social media to find information. I put the word ‘Cuba’ in the search bar on Twitter and came up with so many fascinating articles and blogs written about Cuba. Several I printed and took with me that proved very helpful.

Book the first few nights and your last night before leaving Cuba to save yourself the pressure of finding somewhere to stay, especially if you come in at night. Make sure to print everything out (like the addresses and phone numbers) or write it down since you won’t be able to access emails. I had many friends recommend places to stay and many were full after sending emails to Cuba. It also may take awhile to get an email response since the Cuban people have to go to a shared Wi-Fi park to get Internet or rely on someone from the states to make the connection. I highly recommend using AirBnB to book a room, otherwise known as a Casa Particular. Then you can read the reviews and know you have a guaranteed room. The rooms are often $25 to $35 a night and many other people may be staying in the other rooms in the home. A big breakfast with eggs, fruit, coffee, and fruit shakes are prepared for you for $5 per person. If you desperately need Wi-Fi, we saw one apartment on AirBnb pop up in Havana that had Internet since it was owned by a government worker.

Exchange dollars to euros before you go, and when you get to the airport, convert your euros to CUC’s, the Cuban money really just for tourists. Cuban people use Cuban pesos, their own money system. 25 Cuban pesos (CUP) equal one CUC. Take an extra $1000 in cash on top of your budget, just to be safe or take an extra $100 a day for emergency.

Keep money and your passport on you or keep in the safes often provided in the casas. My boyfriend said he kept an emergency stash of money in the lining of his suitcase. I felt safer keeping it all on me at all times.

Read ahead to find what it costs to get to and from places, if you plan to travel to the beach areas of Veradero, or other places like Vinales, Trinidad, or Cienfuegos. For example, before I left I read up on the amount it would cost to take a taxi from the airport to the city where we were staying. I learned we should not pay anymore than 20-25 CUC total (about $20).

Get the correct travel visa card. Ours cost $85 each on Visitcuba.com although the rest of world pays about $15. Check to see if this special travel card with health insurance comes with your plane ticket. There are many check boxes to explain why you are going to Cuba. We said we were going for the Cuban people. 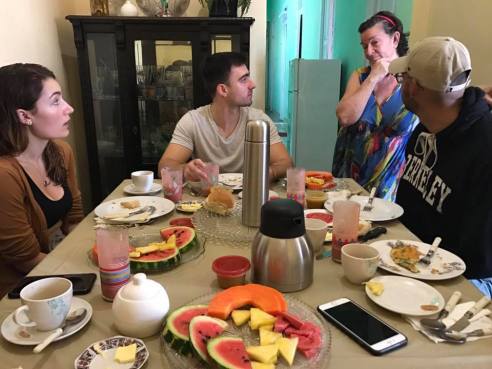 Kuky’s Place on Airbnb, a Cuban grandmother who hosts guests in 3 of her spare bedrooms. Morning breakfast with 2 other couples in Vedado, Havana. 5 CUC will buy you a home cooked Cuban breakfast.

Bring plenty of ammodium and probiotic pills, sunscreen, extra contacts, toilet paper, wet wipes, hand sanitizer, tissues, band-aids and a good hat. All will be impossible to find, unless you want to pay a hefty price. When you are sick and bathrooms are so basic, you will be so happy you have wet wipes and toilet paper. I made it to day 4 without getting sick. Also, bring a good backup battery, especially if you’re using your phone as your camera.

Select small gifts for the people to leave behind as thanks. We learned how badly they wanted T-shirts with rock bands, music and movies on flash drives, cool sneakers (they can be used), beauty supplies, and just every day items.

Getting rid of items as you go lightens your load and will put a smile on someone’s face. Toss old underwear, Tshirts, and socks or leave them for the Cuban people. I’m sure we have several people wearing our items after we left them behind since they could be washed.

Bring tiny toiletries (soap, shampoo, disposable toothbrushes) because many casas will not have them, and you can leave them behind or toss them out as you use them.

The best clothing decision I made was to bring one warm wrap shawl that I ended up using every single night because at night the temperature dropped. I could easily fold the thin shawl and stick it in my backpack when we were gone all day.

Research types of souvenirs you may want to bring back – cigars, rum, coffee, honey. A lot of what we purchased could be bought in the airport after security, so my boyfriend was not thrilled when he learned he way overpaid for sweet and dry rum in Vinales.

Pack light and make sure to include one comfortable pair of sneakers or close toed shoes and flip flops (for the bathrooms, or if you decide to venture to the beach). We regret not bringing a good hat, like baseball cap to protect us from the sun since we assumed it would be easy to buy a cool Cuban hat. No such luck!

Pack a carry-on, especially if you don’t want to wait hours for your luggage or never receive your luggage. These were the stories we heard from friends in LA. However, we had no issues, but realized it would have made no sense to carry bigger luggage especially with all of the moving around we were doing. Budget several hours ahead of time for your return flight, especially if you need to exchange your money back to dollars.

Views from the bar Roma.

Stuff some extra plastic bags in your suitcase to wrap dirty shoes or store dirty clothes because they will be hard to come by once in Cuba.

Buy snacks and water in the airport before leaving so you have some treats and water on you the first few days because even those can be hard to find.

If you are not use to traveling outside your comfort zone, then a tour may be a better option.

Keep an open, compassionate mind. Cuba has an almost 100% literacy rate. We stayed with two gay men, one a former banker and the other a former meteorologist. Both made $20 or less a month until they started renting out their 3 rooms. We spent time with a 35 year old guy trained as a Navy captain, but since Cuba doesn’t have a boat, he works 18 hours a day in a food factory where he makes $20 a month. A 25 year old girl and her mom housed us in Vinales. Their two rooms are solidly booked (thanks to AirBnB), so they are building a third room. A high level of education doesn’t mean you earn more money, but we constantly saw the desire to work, make more money, and enjoy music and movies from the states (often sent to Cubans on flash drives).

Enjoy the rich culture of Cuba, prepared! And remember, leave your expectations at home.

3 Responses to “How do you plan for a trip to Cuba?”