Los Angeles is known as the “City of Stars”, for obvious and completely accurate reasons. But after Cointreau took over Hollywood for a few nights in October, it seems that we might also need to call it the “City of Spirits. Hidden away amidst the glitz and glamour of Tinseltown, Quixote Studios took a few evenings off from filming to play host to the Cointreau Art of the Mix event– an interactive cocktail class featuring recipes from Remy Cointreau crafted spirits Cointreau, The Botanist Gin, and Mount Gay Rum. 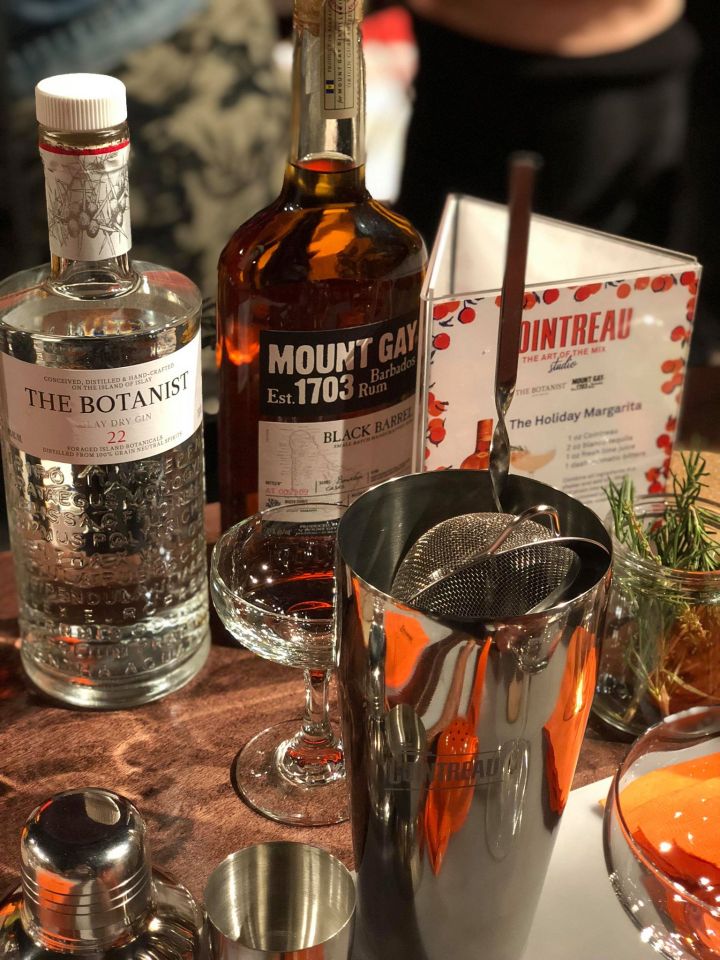 Cointreau is the original, premium triple-sec- a unique French orange liqueur that is featured in over 350 classics cocktails like the margarita and the cosmopolitan. It is an essential ingredient in bartending, a point that Cointreau is seeking to emphasize with this campaign, along with helping holiday party hosts hold the swankiest soirées with the best libations.

At the event, amateur mixologists were greeted with a traditional Cointreau margarita. Invented in 1948 by Acapulco socialite Margarita Sames, this classic was served next to a gigantic Cointreau bottle and a human-sized margarita! After enjoying this refreshing elixir, class was called into session, in one of Quixote’s large studio spaces. Laid out in front of each person was every tool and ingredient needed to fix three unique drinks, from the ubiquitous shaker to several beautiful sprigs of thyme. Our professor of pours took the stage, and the real fun began.

Our first creation was the Holiday Margarita, made more festive than the original due to the presence of aromatic bitters, a rosemary sprig garnish, and a cinnamon sugar rimmed glass. The sweetness of the sugar was a great complement to the tartness of the tequila and lime, and would be perfect for one of our sunny and 70 degrees L.A. winter days!

Next up was the Blackberry Thyme Bramble, featuring as its base The Botanist Gin, one of only two gins made in the Scottish island of Islay, which is more typically known for its peaty scotches. The 22 locally picked Islay botanicals it includes provided a wonderful amount of herbaceousness, complemented by the sweetness of Cointreau and fresh blackberries.

The final concoction was perhaps the most interesting- a Holiday Rum Old-Fashioned, featuring the Mount Gay Black Barrel rum. Mount Gay is the world’s oldest commercial rum distillery, and the Black Barrel variety is unique as it undergoes a second maturation in deeply charred Bourbon oak barrels, which means it has enough whiskey notes to satisfy old-fashioned traditionalists, while also having a very interesting sweetness from the rum.

The fact that you can find Cointreau in these three widely different drinks speaks to how important it is in the cocktail world. There truly is an art to mixing these spirits, and Cointreau has done a great service to hosts around the world by sharing these recipes as we enter holiday party season!

Learn more here – Cointreau, their cocktail recipes, and their Art of the Mix campaign.