Raise your glass with all the world, Friday is Global Champagne Day. And while there may not be a lot to drink to these days, there’s certainly reason to drink. 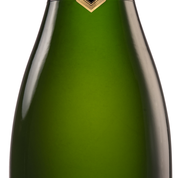 about this year’s crop. He attributes some of that blessing to a rise in temperatures caused by climate change. (When the polar ice caps melt and L.A. is underwater and the world is a post-apocalyptic deathscape, we’ll at least have really great wine.)

Rivoire, stylish in a navy suit and French cuffs despite the unseasonably warm Santa Anas, was in town to commemorate the U.S. launch of Bollinger’s R.D. 2004, the twenty-fifth vintage of its prestige cuvée. We met at the historic Chateau Marmont to savor a glass, which had spent the last 14 years coming of age in the bottle, developing layers of complexity underneath bold notes of tangerine and honey, bubbling to the surface in a pale hue.

“It’s a wine first,” says Guy. And it’s true, this is a slow-sipping blend of Pinot Noir and Chardonnay grapes ideally served in a wine glass rather than a flute, so that the flavors might be fully appreciated.

Bollinger relies on a blend that is always at least 60 percent Pinot Noir (the R.D. 2004 is 66 percent, and 34 percent Chardonnay) because of the varietal’s fruitiness and its aging potential. Its R.D.s are always oak-barreled and of a single vintage.

The R.D. designation (“Recently Disgorged”) is a tribute to Lily Bollinger, who shook up the industry by holding back some of the 1952 vintage to release in 1967. Madame Bollinger, as she was known, ran the company for 30 years, following the untimely death of her husband in 1941. 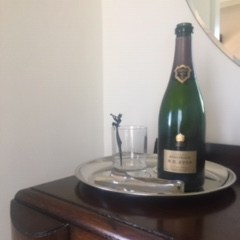 Disgorgement, if you’re unfamiliar, is the process of eliminating the sediment that collects in the neck of the bottle as it matures. That sediment, mostly a mixture of dead yeast, must be rotated during its second fermentation, in the bottle. This is called “riddling” (“remuage” in French), and while most of that work is done by machines these days, Bollinger still uses the traditional technique of riddling and disgorging by hand (a good riddler, Guy asserts, can rotate 50,000 bottles a day!).

The R.D. 2004 pays homage to Madame Bollinger’s prescient vision of what Champagne could be. This Global Champagne Day, consider popping a cork of this extraordinarily fine bubbly, which is itself a celebration. Cheers!