This article was first published on MoneyInc, March 2019.

On February 26, 2019, the Grand Canyon celebrated 100 years since its designation as a national park, thanks to President Theodore Roosevelt. There’s no better time to connect with the outdoors by exploring this UNESCO World Heritage Site. In 1903, President Roosevelt stood over the gorge and declared, “Let this great wonder of nature remain as it is now. Do nothing to mar its grandeur, sublimity, and loveliness. You cannot improve on it.”

The Grand Canyon is one of the seven wonders off the natural world and is visible from space. The 2,000 square mile park contains five different major ecosystems, more than any other American national park. Some 18 miles wide, the Grand Canyon is 277 miles long with striated walls that change color by the hour, shifting from crimson to orange to purple. And the Grand Canyon is still growing!

In my 20’s, I visited The Grand Canyon on an adventure trip, but the tour consisted of jumping out of the van to marvel at the landscape from one rim. This time, almost twenty years later, I was hoping to really experience the land as more than a pitstop. I wanted to give the canyon the time it deserves, not just an Instagram shot. 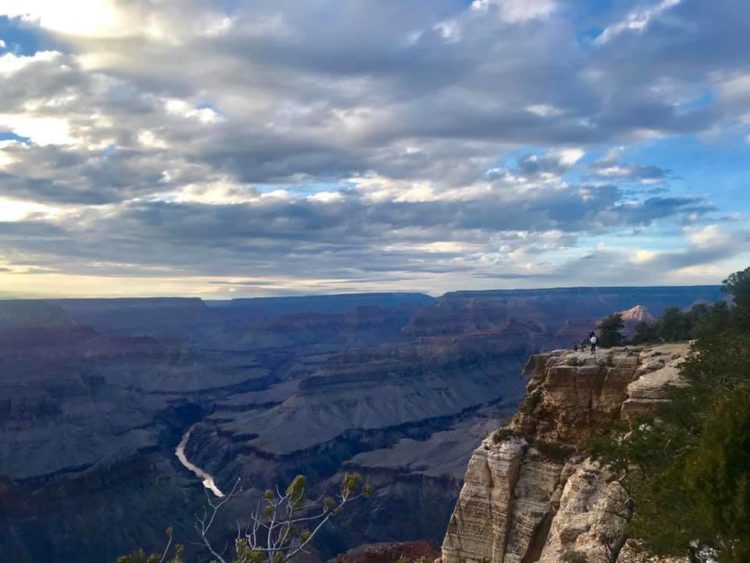 To devote a while to nature’s masterpiece, think about spending a night or two at the rim, where you will find the main visitor’s center and several lodges anchored by the historic man-made wonder, the El Tovar Lodge. Built in 1905 by Hopi craftsmen and designed by architect Charles Whittlesey at a cost of $250,000, this rustic restaurant/hotel is the ideal place to dine with a canyon view, over a Navajo taco lunch. Inside, the dark stained timbers and walls are adorned with moose, deer, buffalo heads and magnificent Grand Canyon paintings. Modeled after styles from Swiss chalets and Norwegian villas, this was done in an effort to appeal to the tastes of the elite in that era, who at the time considered European culture the epitome of refinement. Numerous celebrities like Oprah and presidents like Bill Clinton have stayed in the old school presidential suites at this National Historic Landmark with the waving American flag and jaw-dropping vista views off their room decks. Even Paul McCartney showed up once to jam on the piano. 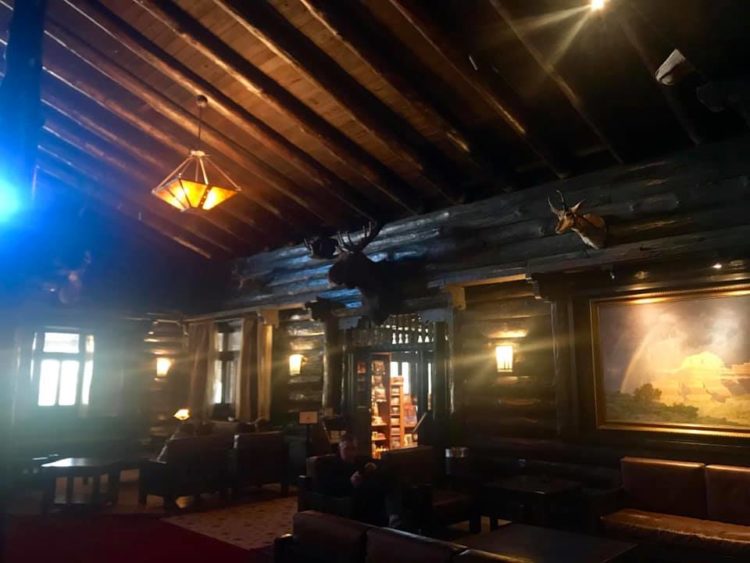 The lobby at historic El Tovar

Rooms around $100 are also available nearby, while our comfy modern room at the Thunderbird Lodge near El Tovar – with Grand Canyon views from our bed – was around $238. Kachina Lodge, El Tovar Hotel and Bright Angel Lodge are options to consider with similar price points. Bright Angel Lodge, now with a family style restaurant, gift shop, and old-style bar, serves as a remembrance to its colorful past, once designed by Southwest architect Mary Colter in 1935 under the direction of the Santa Fe Railroad in an effort to provide more moderately priced lodging. Mary Colter, a former teacher, became a female pioneer at the time, as an architect, designer, and decorator for the Fred Harvey company, going on to design many of the buildings at Grand Canyon. Her designs were unique for the time because she used the cultural heritage of the region rather than intimate European styles. Spend time at the Hopi House and the Bright Angel History Room to learn more about Fred Harvey, Mary Colter, and The Harvey Girls. 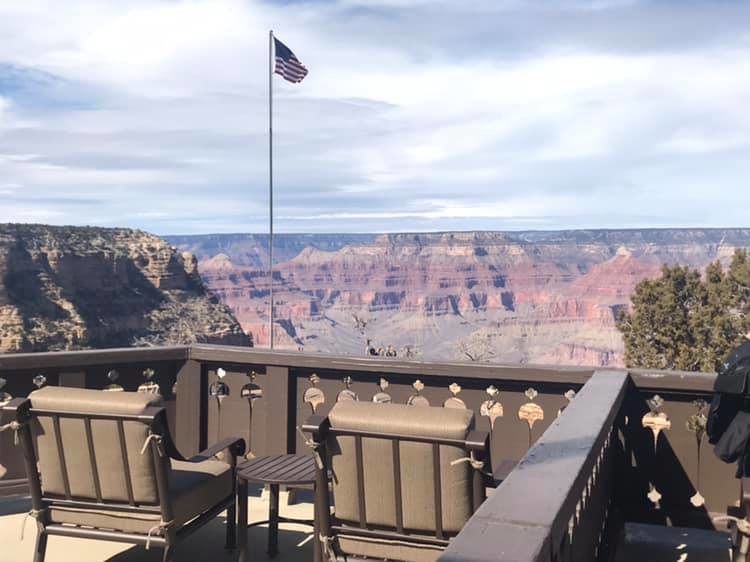 Book a suite at El Tovar with a deck right off your room with Grand Canyon views.

But to make your Grand trip even grander, travel back in time aboard a vintage train, along with a century-old rail line that departs outside the Grand Canyon Hotel in Williams, Arizona near the best-preserved stretch of Route 66. Three hours north of Phoenix and nestled within the Ponderosa pine forest, begin your 130-mile roundtrip journey to the Grand Canyon from the AAA Three-Diamond Grand Canyon Hotel, recently refurbished with 298 guestrooms and suites, an indoor pool and hot tub, and dining at Spenser’s Pub and the Grand Depot Café. If time permits, don’t miss exploring the small town of Williams in the middle of the wilderness, flanked with neon lights, quirky watering holes like the world-famous Sultana Bar, and shops selling petrified wood and geode balls filled with quartz. Nearby, make time for driving through Bearizona Wildlife Park. 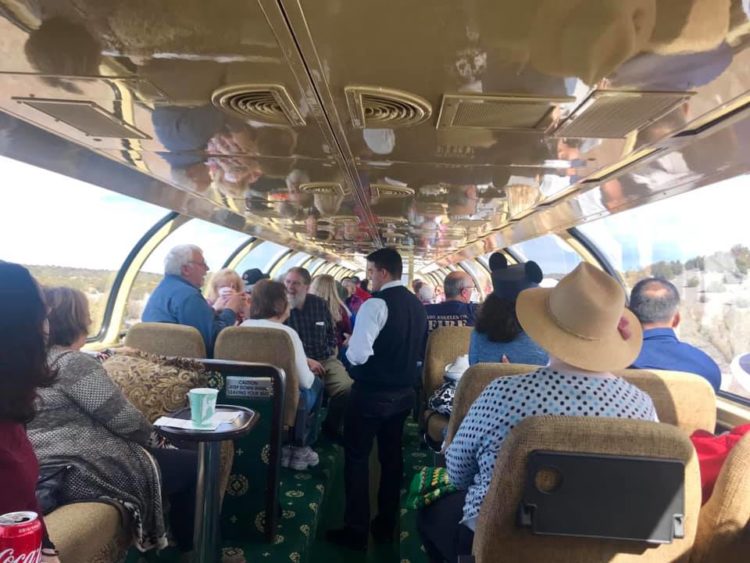 Hop on the train right outside the hotel at the Williams Depot, but not before a comical gun wielding Wild West show. Feel like you are back in 1901 where the railway was your only mode of transportation and only a few reminders of human existence occur along the steel tracks. Choose from six distinct classes of restored passenger service and enjoy a 2.5-hour ride one way with snacks and drinks while observing the changing terrain from high desert to prairie, prairie to pine. 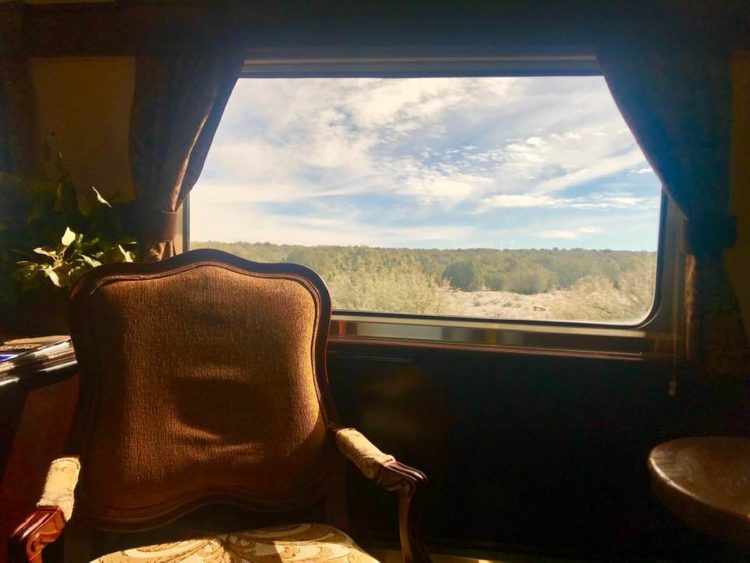 On this leisurely trip with panoramic views, expect to be periodically entertained by cowboy balladeers singing songs, playing the banjo, or cajoling passengers. As you stare out the window, visualize what hardships Coronado, Beale, and those before us had to endure some 100 to 350 years ago, to carve out trails and travel through such a harsh, unforgiving landscape. Feel the gentle sway of the Harriman cars built in 1923 and look for mule deer, elk, and soaring birds. You might just spot a gun-slinging cowboy on your route or be shaken up with a train robbery heist to make you really feel like you have traveled back to the turn of the century wild west. Upgrade to the plushly adorned Luxury Dome train compartment and cheers with some sparkling wine outside on the rear Observation Platform of the train. 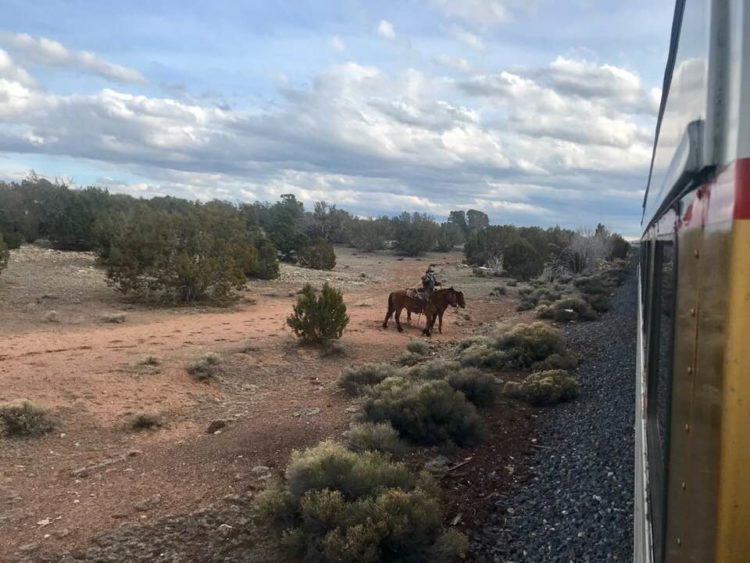 The rail lifeline to the Grand Canyon almost faded into history when passenger service stopped in 1968, as cars took over, but in 1989 entrepreneurs brought it back to life carrying about 200,000 people to Grand Canyon National Park each year. Owned and operated by Xanterra Parks & Resorts, we can now say, All Aboard to the Grand Canyon! On select days in 2019, one of the historic steam locomotives will be scheduled to pull the train to the Grand Canyon from Williams, Arizona and back again. For more information about these special Grand Canyon Railway and Hotel packages, visit www.thetrain.com. 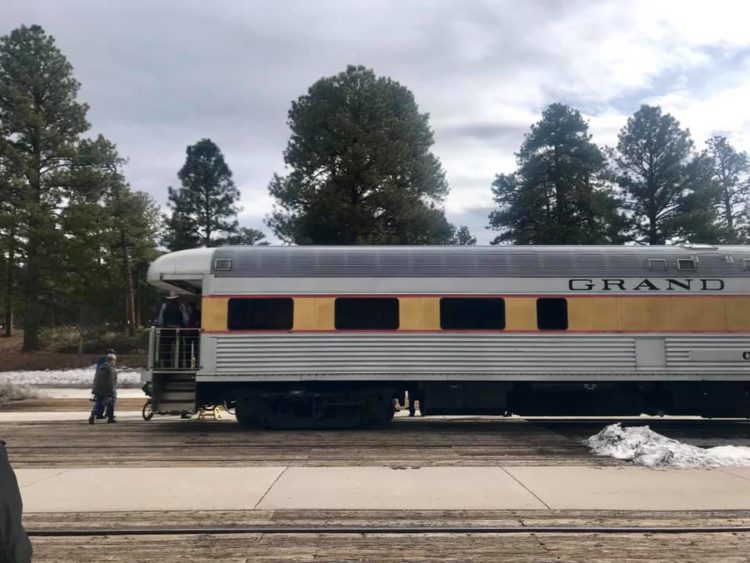 Upon arrival, stroll the South Rim around 7,000 feet above sea level where the views are considered the most dramatic. Gaze at the canyon colors amid forests of juniper, pinon, and ponderosa pine trees or hike a corridor trail on the South Rim, such as a few miles down and back on the Bright Angel Trail. However, for those with stamina, this 9-mile trail runs to Phantom Ranch, the only lodging below the rim. Reservations should be made in advance. Snow, ice, and mud dotted the trail when I was there in March, so be careful on the narrow path to keep a strong footing or bring along a walking stick. About 11 people fall to their death each year, often from careless errors. 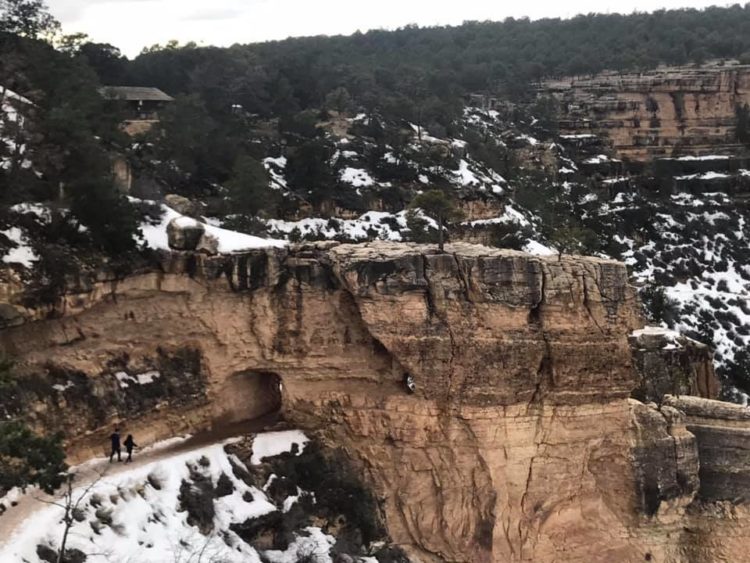 Guided canyon vista rides on a sure-footed mule are possible on the rim as well as overnight rides down into the Grand Canyon. Mules, a hybrid of a female horse and male donkey, have been carrying visitors since the late 1800s. The Canyon Vistas Mule Ride is a 2-hour trek that travels along the East Rim of the canyon where you will learn from the Mule Wranglers about the geological formations, cultural history, the area’s native people, the surrounding forest, and more. 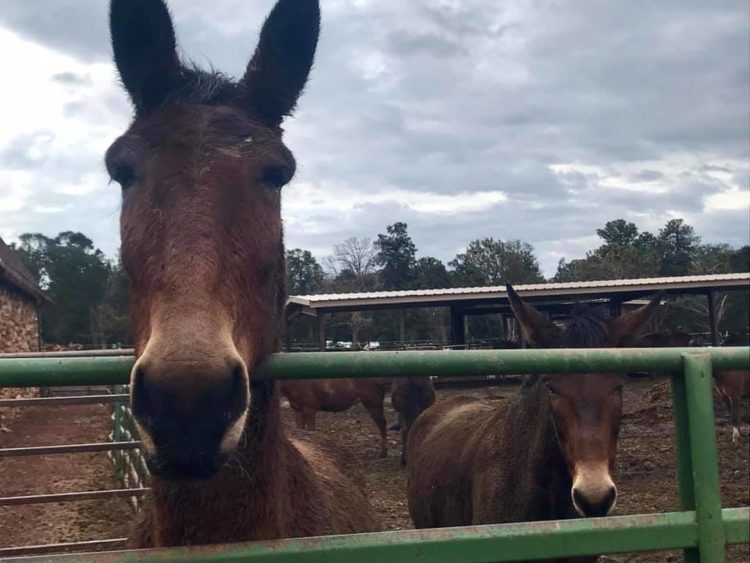 A Sunrise or Sunset motor coach tour is a peaceful and exhilarating way to witness the color palette glow over this natural wonder. Departing from the lobby of Bright Angel, the environmentally friendly coaches stop at various vantage points with time for enjoyment at numerous vistas. Led by an entertaining guide, full of facts about the topography and captivating history, you may just learn something new. No matter what time of day, you are in for a treat, although one morning up early for sunrise, the canyon swiftly became obliterated by rolling clouds as it began to rain like someone smudged out a painting. 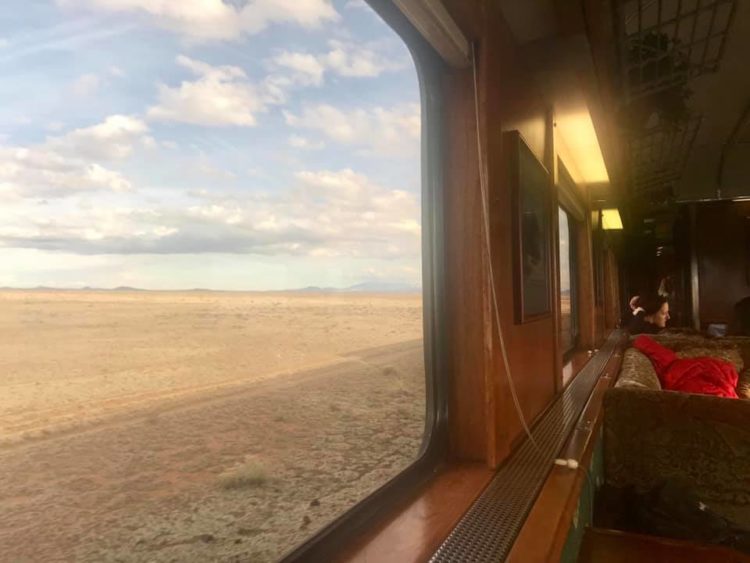 For the more adventurous, a 21-mile hike from the South Rim to the North Rim would need to be carefully mapped out, while the area’s newest attraction is a 70-foot-long glass-bottomed Grand Canyon Skywalk that juts out 4,000 feet above the canyon floor, located in Grand Canyon West on the Hualapai Indian Reservation. Adventures on the inside include rafting the Colorado River and camping near sandy river beaches under the stars. These types of excursions should be booked way in advance. We learned the best time to visit is November and January, when there are fewer crowds. 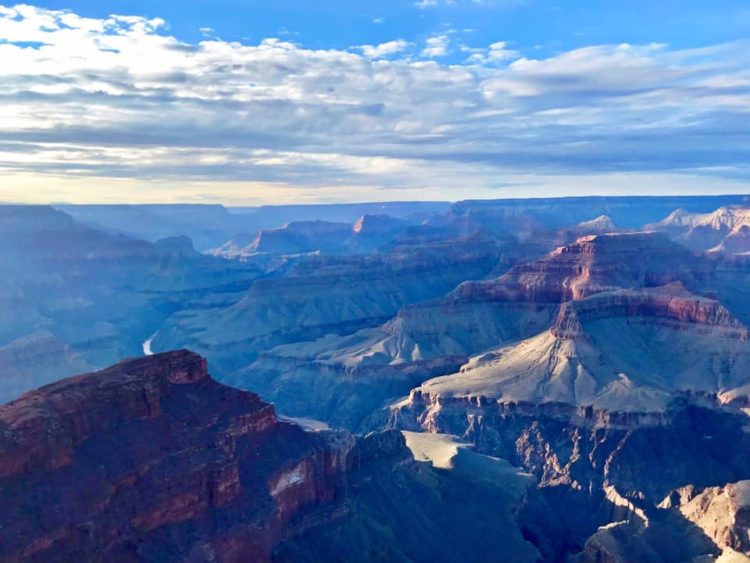 Go to see the grandeur and beauty of the ever-changing landscape. Feel how small we really are and how lucky we are to witness this mile-deep chasm carved by the Colorado River, the result of 1.8 billion years of geological craft.