This article was first published on MoneyInc, April 2019.

Twenty-five years later I returned to the Phoenix area, but this time it was not to live with the Apache Indians and volunteer on their reservation in San Carlos. I was headed to Gilbert, Arizona, a thriving suburb 30 minutes outside of Phoenix that was once the hay shipping capital of the world thanks to the Union Pacific Railroad running through the town and Bobby Gilbert selling the land to this freight hauling railway company. 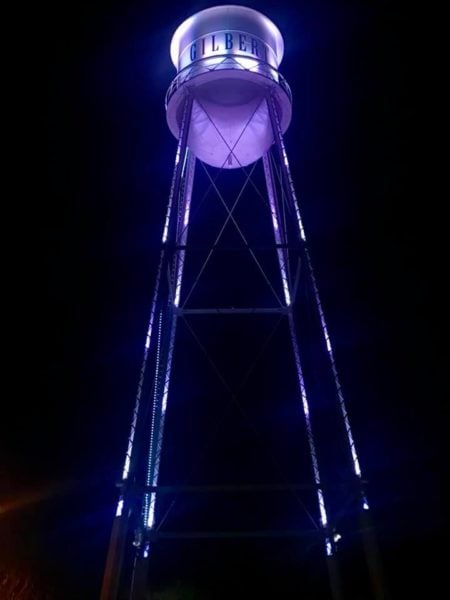 Now Gilbert is the “largest town in America” and residential industries have replaced agriculture. Gilbert’s new strength is a food destination. There are 26 restaurants in their downtown Heritage District alone with the iconic water tower announcing its presence in this flat land. Gilbert comprises 72.6 square miles and with over 300 days of annual sunshine and a lower cost of living than most American cities, it is no surprise many young families are flocking to this town of about 250,000 people. Incorporated in 1920, Gilbert chose to remain a “town” and a not incorporate as a city in the hopes of keeping the community feel of a small town in a large community. Today, deemed “Phoenix’s coolest suburb,” people move here because the area is considered one of the safest and best places to live in the USA. 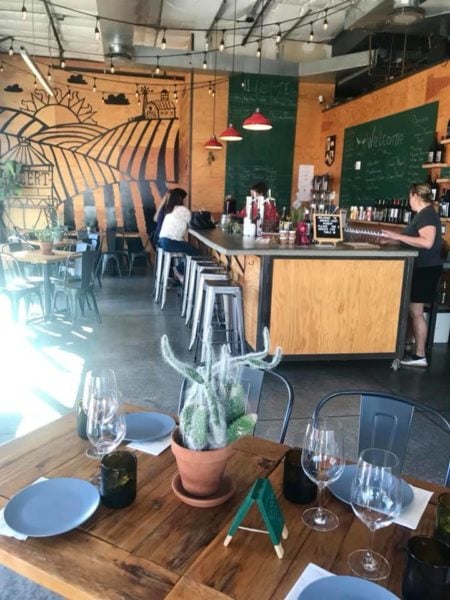 Gilbert’s farming roots still show up in the local food scene, entertainment, and in uniquely handcrafted creations. An impressive dizzying array of breweries, coffee shops, garden patios, cheery colorful wide-open grand establishments donned in retro vintage playful décor with kid-friendly areas exist in the town center. Menus offer similar grub you would expect to find in LA, but for a fraction of the cost. Italian-focused wine bar Postino laid the case for the development of this central town. My exploration of Gilbert began on a weekday at noon, where it felt like no one was working because the restaurants were overspilling with happy people dining. Find the water tower and brunch at Snooze, a kitschy indoor-outdoor eatery serving calorie rich indulgences like Breakfast Pot Pie and Pancake Flights with options like pineapple upside down pancakes, blueberry Danish pancakes, and sweet cannoli pancakes. 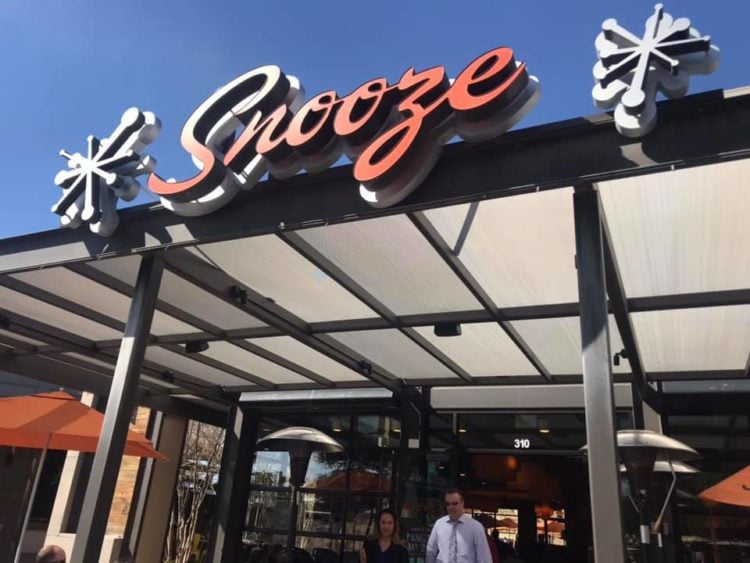 Meander the town to peruse other options like Zinburger (Wine and Burger Bar), Joe’s Real BBQ, Bergie’s Coffee House with garden patio and willow trees, and O.H.S.O Kitchen/Brewery and Distillery with chandeliers dangling with bicycles and a bar backdrop decked out in bike seats. With over 40 beers on tap and a new hidden restaurant and bar inside called The Novelist, donned in red leather booths and bold art gazing at you, Gilbert feels like a place you could never get bored. There is no shortage of dog-friendly social hotspots here too as another restaurant and entertainment facility just opened called The Yard. The 25,000 square foot building with indoor and outdoor seating, two private dining rooms, and an outdoor entertainment area deemed “The Yard” will keep guests sipping craft cocktails even more delighted with backyard-style games like ping-pong and cornhole. 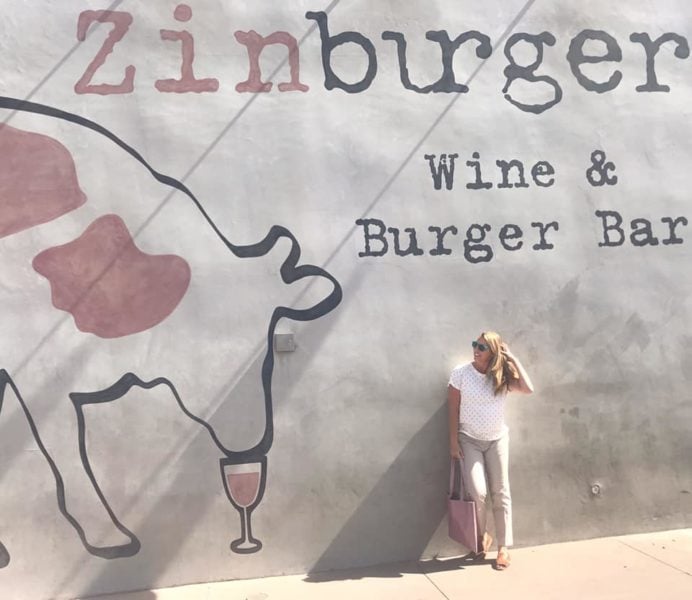 In town we heard the hip Asian comfort food spot Clever Koi is where to order cocktails, while Joyride Taco House should be on your list for tacos and margaritas. We stumbled upon Rocket Fizz, a unique fun mega candy store with many nostalgic brands that also sells hundreds of bottled sodas in outrageously hilarious flavors like Key Lime Pie, Grass, Peanut Butter, Ranch Dressing, Birthday Cake, Buffalo Wing, and Pumpkin Pie. At night, the Liberty Market neon sign that has been around since 1953 beckoned us. Once an old grocery store run by the Chinese, now inside you can sit amongst the old brick walls and order dinner at the café counter before being served. Wood fired pizza, house-made pastries, an espresso bar, and craft cocktails are all reasons to stop in but don’t miss the Liberty Pasta Bowl with meatballs, Short Rib Rigatoni, and Salt River Bar for dessert. After dinner, you may wish to discover Gilbert’s new speakeasy called The White Rabbit, where a secret door leads you into an enchanting setting. A hall aligned with partially filled vintage apothecary bottles leads you to the bar area with black and white photos from the 1920s, leather seating, and crystal chandeliers. This underground location will transport you to another era while you sip classic cocktails such as the Sazerac, Bee’s Knees, or The Mary Pickford. 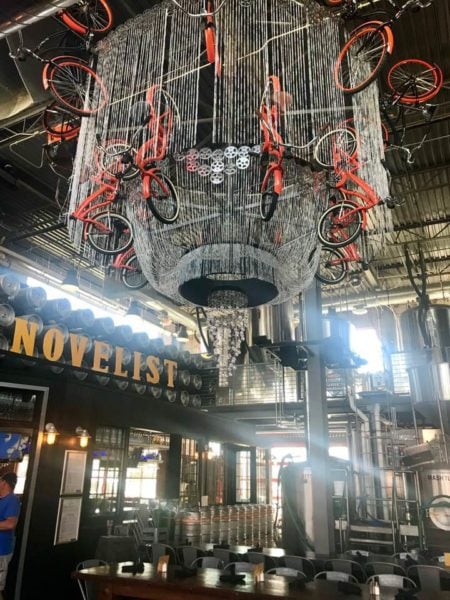 With 6 or 7 breweries in the Gilbert area, don’t miss Arizona Wilderness Brewing Co for an outdoor sunset dinner and a beer sampler. Named Best New Brewer in 2013 (in the World) and the Best Brewery in Arizona, the brewery creates 100 different beers every year. Savor a Build Your Own Burger with grass-fed Arizona beef complimented with their signature duck fat fries while determining which beer excites you the most. AZ Dreamsicle with a blend of AZ oranges, Salt River Saison that tasted like a hint of oyster, and wine beer hybrid Rose Nouveau all delighted my taste buds 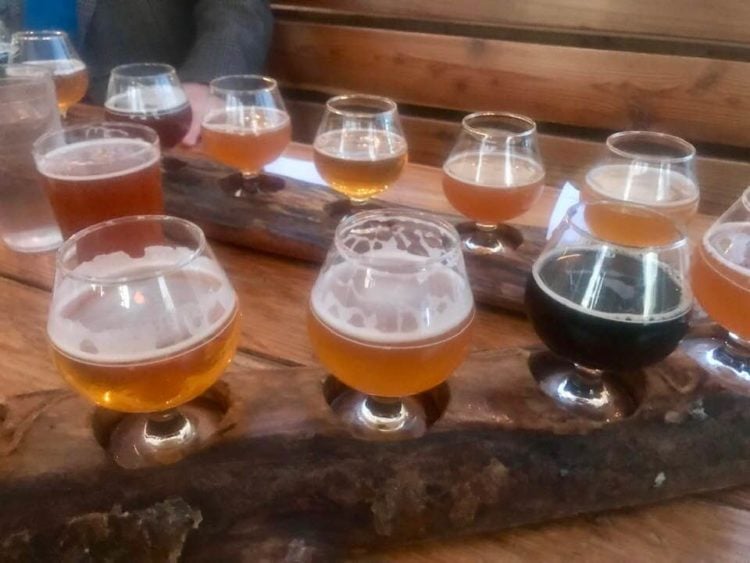 Not too far from the Heritage District lies the Farm at Agritopia, where Gilbert attempts to recreate the idealized suburb of the past, where people know their neighbors, children play outside in the streets, and walking and biking are the preferred modes of transportation. Arizona used to be the largest producer of cotton and at one point all that led to this area was a dirt road. Joe Johnston, who grew up on a cotton farm in this once rural town, is the brainchild of this conceptualized neighborhood. On the 160 acres of Agrotopia lies a contained village of 450 residential homes, senior living homes, a K-8 private school, clubhouse, pool, and tennis court. Average home prices are $350,000 – $400,000. Community farming is combined with u-pick orchards, a farmer’s market, and produce that ends up on the menus of the restaurants nearby. A series of restaurants surround the housing areas like the flagship restaurant called Joe’s Farm Grill. Barnone is a converted machinery barn on the farm filled with eateries, a flower shop, and artisanal marketplace. The urban organic farm includes herbs, grape vines, 13 beehives, citrus and peach trees, and palm trees for dates. 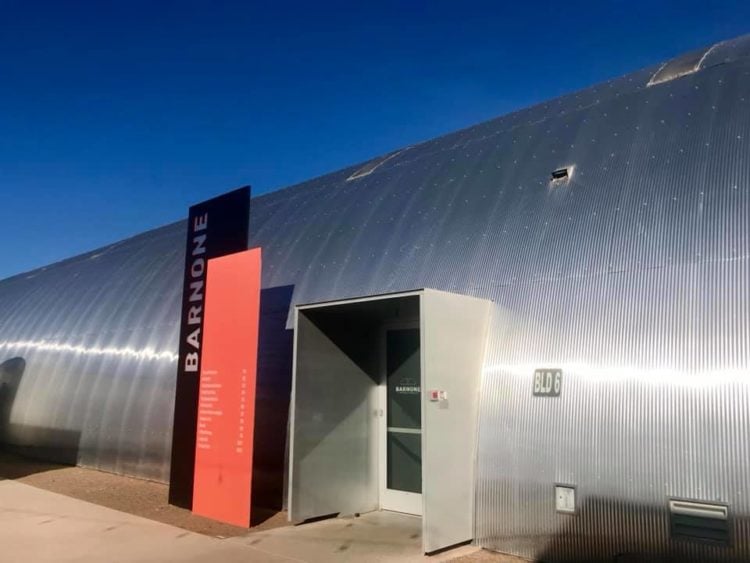 Two restaurants at Agritopia have been featured on the Food Network. The Coffee Shop was featured on Cupcake Wars three times for their cupcakes. Our most memorable stop was Garage East at Barnone, a casual comfortable open-air wine garage just two and a half years old. The winemakers grow their own grapes from two different vineyards in southern Arizona and experiment with the base fruit to create wines from a variety of fruits at different stages of the fermentation process. Savor charcuterie with local creamy cheeses and sausage bites with a wine flight in test tubes. Breakfast Wine with citrus, Zin, and Tempranillo were surprisingly exceptional wines. 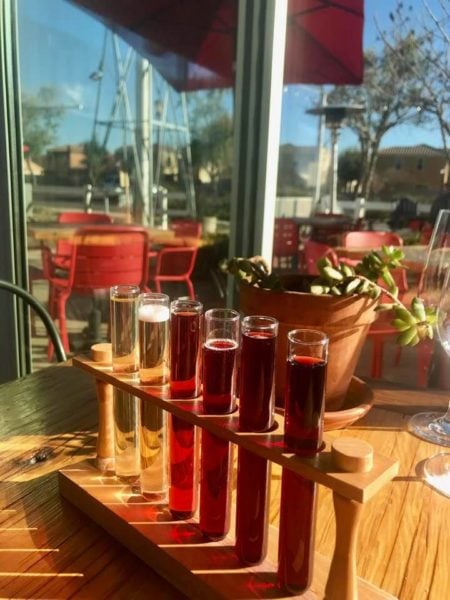 One morning I found myself at the Riparian Preserve wishing I brought my binoculars. This popular spot for bird watchers – and those who like to see wildlife close up – is the result of reclaimed water in the arid desert provides a fishing lake and shallow ponds for wildlife. This is a nice place to walk around and sit and enjoy nature. We spotted many cottontail rabbits, quail, hummingbirds, herons, egrets, and more amongst the idyllic setting that starts with giant saguaros. 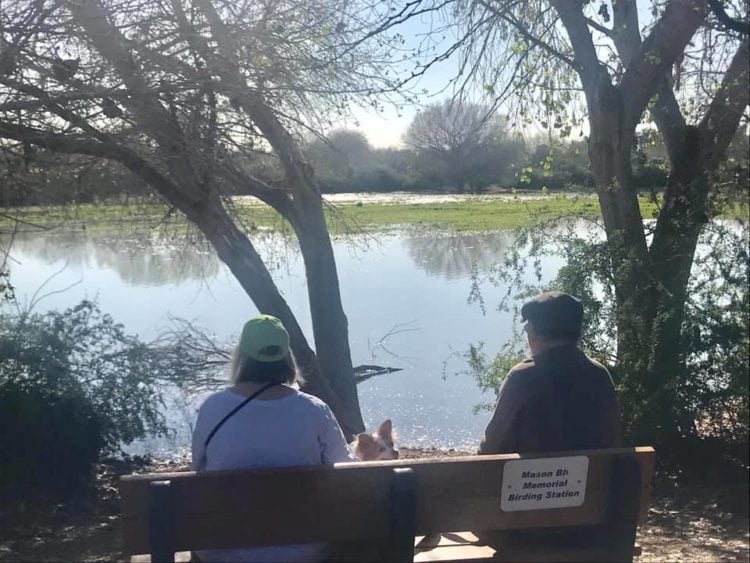 If you haven’t tried goat yoga, Gilbert may be the place for you to start. Goat yoga seems to be increasing in popularity so much so that it is popping up in almost every state in America. Whether it is for the joy of goats, obtaining the ultimate Instagram shot, or finding your animal yoga Zen, one thing is certain – goats in funny costumes bring smiles and is the new American pastime. Arizona Goat Yoga in Gilbert brought 30 of us together in a circle while goats (taunted with food) hopped around and on us during an excitable yoga class. Llamas and goats dressed in various playful attire greeted us when we arrived while pets and selfies began before the class. Arizona Goat Yoga is known for being in the Guinness Book of World Records for hosting goat yoga for 350 people, the most amount of people at one time. More like a party, goat yoga is like pet therapy! 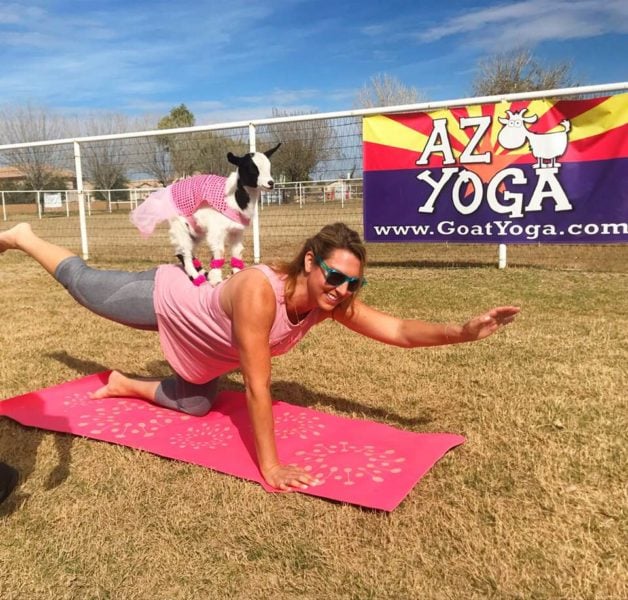 A trip to Arizona would not be complete without a Major League baseball game during spring training which occurs from February to March. Nearby Gilbert is a new stadium complex (voted number one spring training facility of the Cactus League) called Salt River Fields at Talking Stick located in the Salt River Pima-Maricopa Indian Community, where the Arizona Diamondbacks and Colorado Rockies train. Arizona’s 15 Cactus League clubs drew a total of almost 2 million fans last year with ten ballparks within an hour of each other. We took in an exciting stadium packed game of the Chicago Cubs versus the Arizona Diamondbacks on the top deck, but many people who weren’t in a fixed seat or mingling and eating on the wrap around concourse were on the lawn, which fits 4000 people. 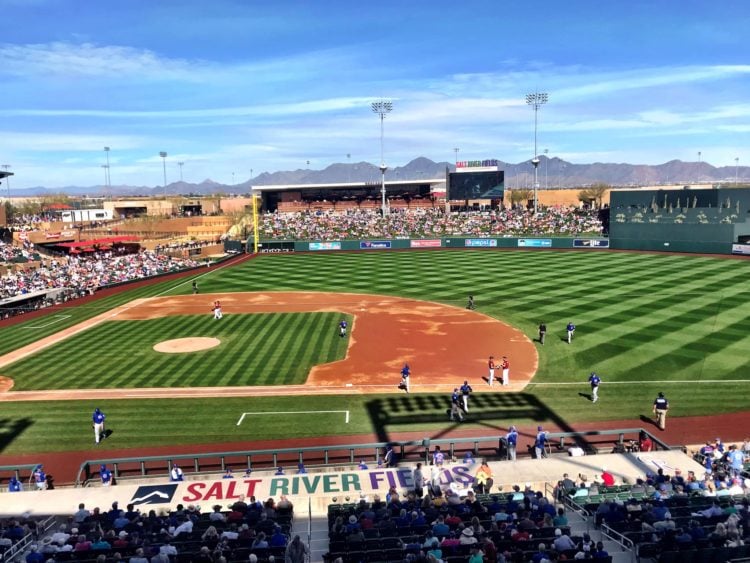 With 135 miles of bike lanes and 5 golf courses (4 are public), vast open space is still possible in Gilbert, Arizona. The area makes an ideal home base for Arizona explorations, with spring training nearby and many outdoor attractions within an hour to two-day trip away. There are 22 national parks (including the Grand Canyon) and 35 state parks ready for you to explore. Today you can stay in one of six budget-friendly hotels (4 opened in the last 6 months) with plans for a boutique hotel opening in two years downtown. 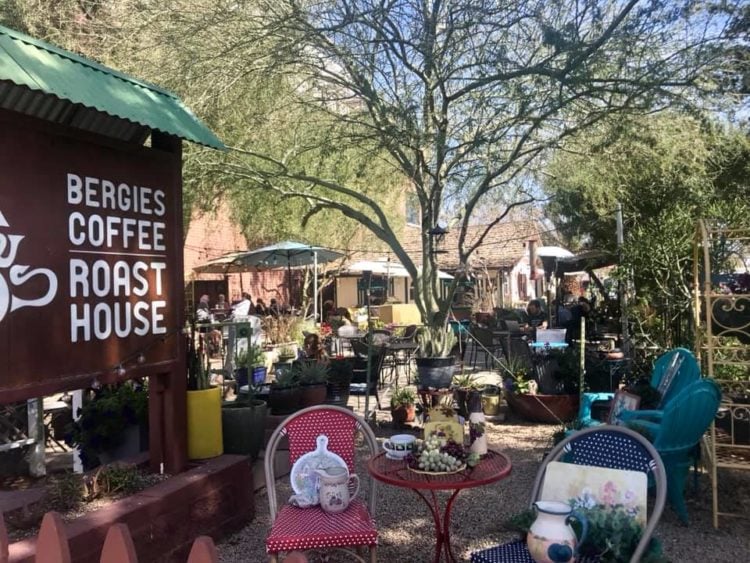 After spending time in Gilbert and traveling recently to other American cities, I was getting the feeling that many of America’s less-populated areas outside major metros are becoming “hipster new” and offering the best version of city life in a suburban setting.  I can’t help but contemplate if Gilbert is possibly too good to be true.