The Grand Opening of the new Hard Rock Hotel Los Cabos kicked off its arrival with a SMASH – on the southern tip of Mexico’s 1,000-mile-long Baja Peninsula. Hard Rock’s classic Guitar Smash included over 50 participants on the beach swinging and smashing strings – with all proceeds benefitting a local charity.

Leading the cause for this Hard Rock brand staple was celebrity host, Mario Lopez with rapper Lil Jon on top of the guitar shaped stadium-size stand on the beach, plus owners, executives, and travel partners. Fireworks over the ocean blew up in dazzling colors to the beat of AC/DC’s Thunderstruck while media and hotel guests cheered on the raucous scene. See more photos on @LaLaScoop.

Shortly after, guests sipped Moet bubbly and tequila while noshing on endless bites from popular vendors, Mexican food trucks, and Hard Rock’s local eats before gearing up for an intimate outdoor performance by Spanish pop-icon Enrqique Iglesias. The crowd danced, cheered, and videoed the show while one audience attendee received a big smooch from the sexy singer.

Celebrations kicked off Wednesday, October 23, with an unforgettable Pinktober® welcome performance by Bret Michaels, where hotel guests and invitees were decked out in pink in support of Breast Cancer Awareness Month. A pink Fender guitar autographed by Michaels was auctioned off for donations to Los Cabos Women’s Wellness Foundation. Mexican artist Fermin La Calaca created a masterpiece honoring the opening, as he painted a live portrait of Bret Michaels. The festivities continued until Friday, where vacationers relaxed poolside on sunbeds and cabanas, and “got low” to a DJ set from rapper and DJ Lil’ Jon.

Earlier in the night before the Guitar Smash, Mexico proved that the red carpet is not dead, as celebrities and local personalities donned the front walkway of the Hard Rock in their hottest garb – from Scott Eastwood, Erika Christensen, Lindsay Price, Real Housewives’ Lydia McLaughlin, and Alfie Allen from Game Of Thrones.

Perched at the southern tip of Mexico’s Baja Peninsula, the most luxurious Hard Rock built to date celebrated the brand’s fifth all-inclusive resort.  From over 5 restaurants, 3 lavish lounges, mega pool bars, to airy bright ocean views with balconies outfitted in outdoor tubs, the Hard Rock has redefined all-inclusive as “Limitless” with epic add-ons like spa, tours, and golf.

While the prime reason to stay here is FUN in the sun and live intimate performances, the hotel boasts 639 rooms and 60,000 square feet of meeting space, extending diverse offerings to guests of all ages, and various settings to conduct meetings, dinners, and special events – all with no extra charge. 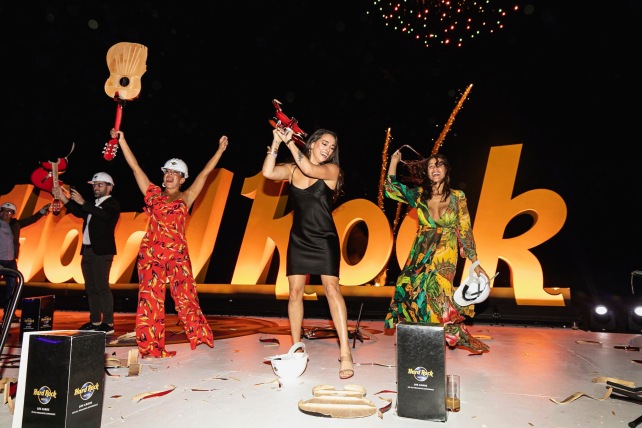 Unique spaces can be found all over the property as well as designated adult-only pools and kid-friendly water slides in the main pool. Family-friendly action can be found at the on-site bowling alley or visitors can swing at the nearby golf courses. Guests are able to get glammed up for a night out at POSH® Beauty Salon & Boutique, with a full set list of offers including hair, make-up, and more treatments to steal the show. 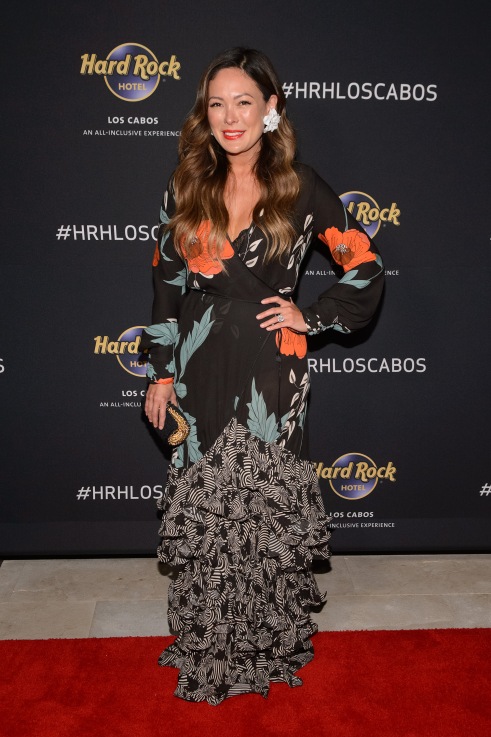 Lindsay Price looking stunning on the red carpet during her first weekend away without the family. (Photo credit: Daniel Boczarski)

Special perks also include Sound of Your Stay® music program, where the mood can be set with a complimentary Crosley turntable or Fender guitar to rock out in your room. Guests can reserve both at the front desk complete with headphones for no noise complaints. Additionally, the property offers a Rock Shop® selling all brand merchandise, and a Hard Rock Roxity Kids ClubTM, as well as a full-service Rock Spa® featuring Rhythm & Motion® – the world’s first fully immersive music-centric spa menu utilizing amplified vibrations, pressures, and patterns, as the foundation of its treatments.

“We are proud to welcome the Hard Rock Hotel Los Cabos into our portfolio. With its extraordinary amenities and dramatic architecture, this property will be a jewel in the crown of our West Coast portfolio,” said Dale Hipsh, senior vice president of Hard Rock Hotels. “The serene backdrop of the Mexican desert nestled into the coastline of the Pacific Ocean provides an ideal canvas for our unique brand of music-centric hospitality.”

While you can’t swim in the Pacific Ocean in front of most resorts in Cabo due to the rough conditions, you will still feel like there’s no reason to ever leave the new grand Hard Rock Hotel Los Cabos.

To learn more about this FUN property, check out our recent MoneyInc travel article – Ten Reasons to Stay at the Hard Rock Hotel Los Cabos.

For more information or to book a stay at any of the Hard Rock Hotels & Casinos around the globe, visit Hard Rock Hotel Los Cabos or hardrockhotels.com. 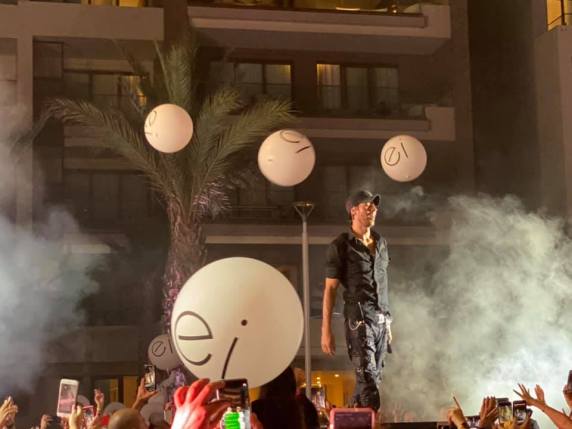 With venues in 75 countries spanning 259 locations that include owned/licensed or managed Hotels, Casinos, Rock Shops®, and Cafes – Hard Rock International (HRI) is one of the most globally recognized brands. Beginning with an Eric Clapton guitar, Hard Rock now owns the world’s most valuable collection of music memorabilia at more than 83,000 pieces, which are displayed at its locations around the globe.