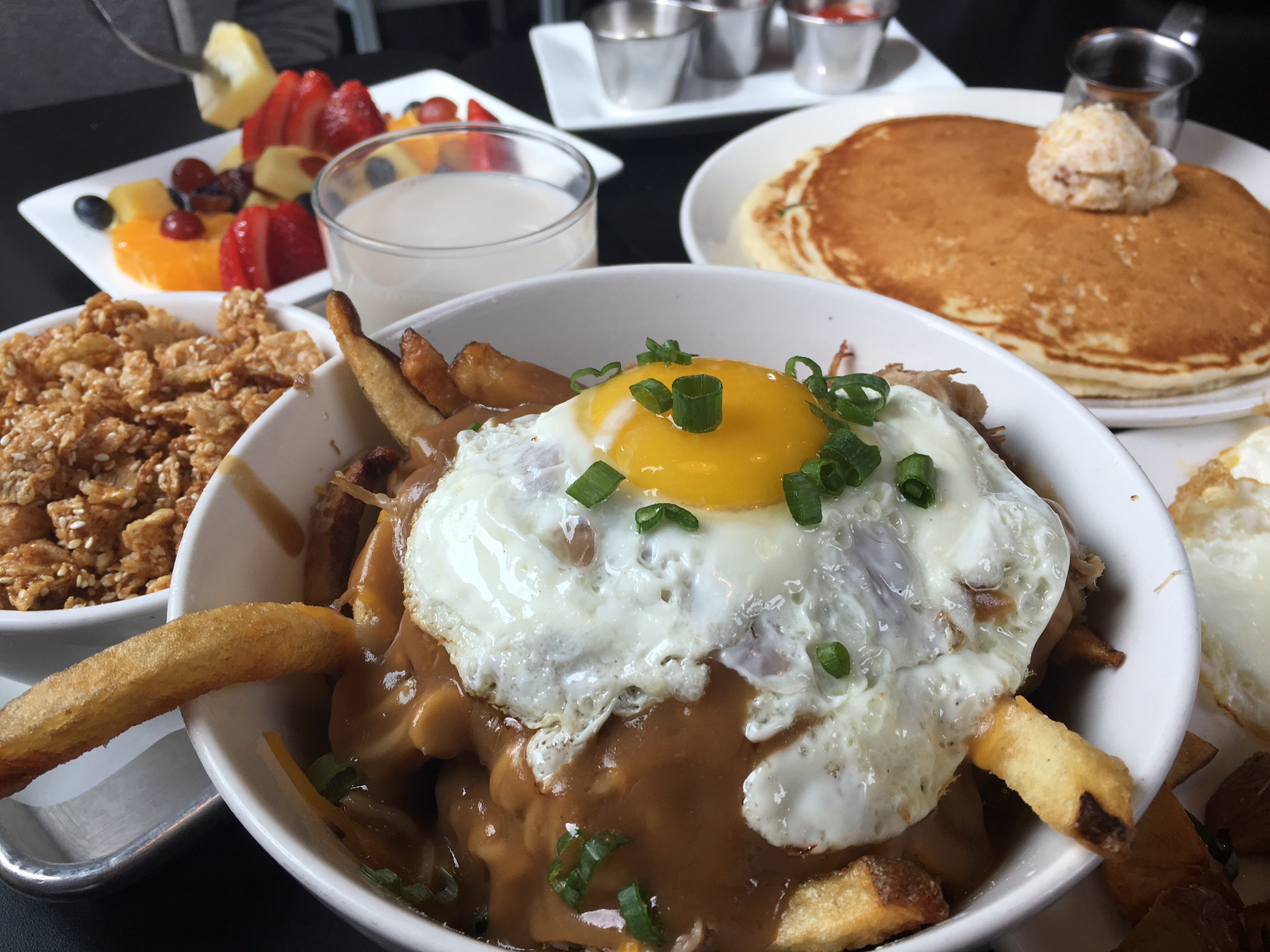 The beauty of a city is learning about its culture through food. My introduction to Seattle after 22 years included a necessary stop at a Chinese tea house at the edge of the famous Fish Market. After a bout with food poisoning, serious lack of sleep, and dragging our suitcases for at least a mile from from the Link light rail, my body felt like it was about to collapse. Stumbling upon this informative tea house offering many samples was my savior. The tea house known as Vital T Leaf not only offered numerous tastes, but a tea education. The humorous tea anecdotes of these young friendly knowledgeable Chinese kids running the store was a welcome break. Black tea can do the trick! 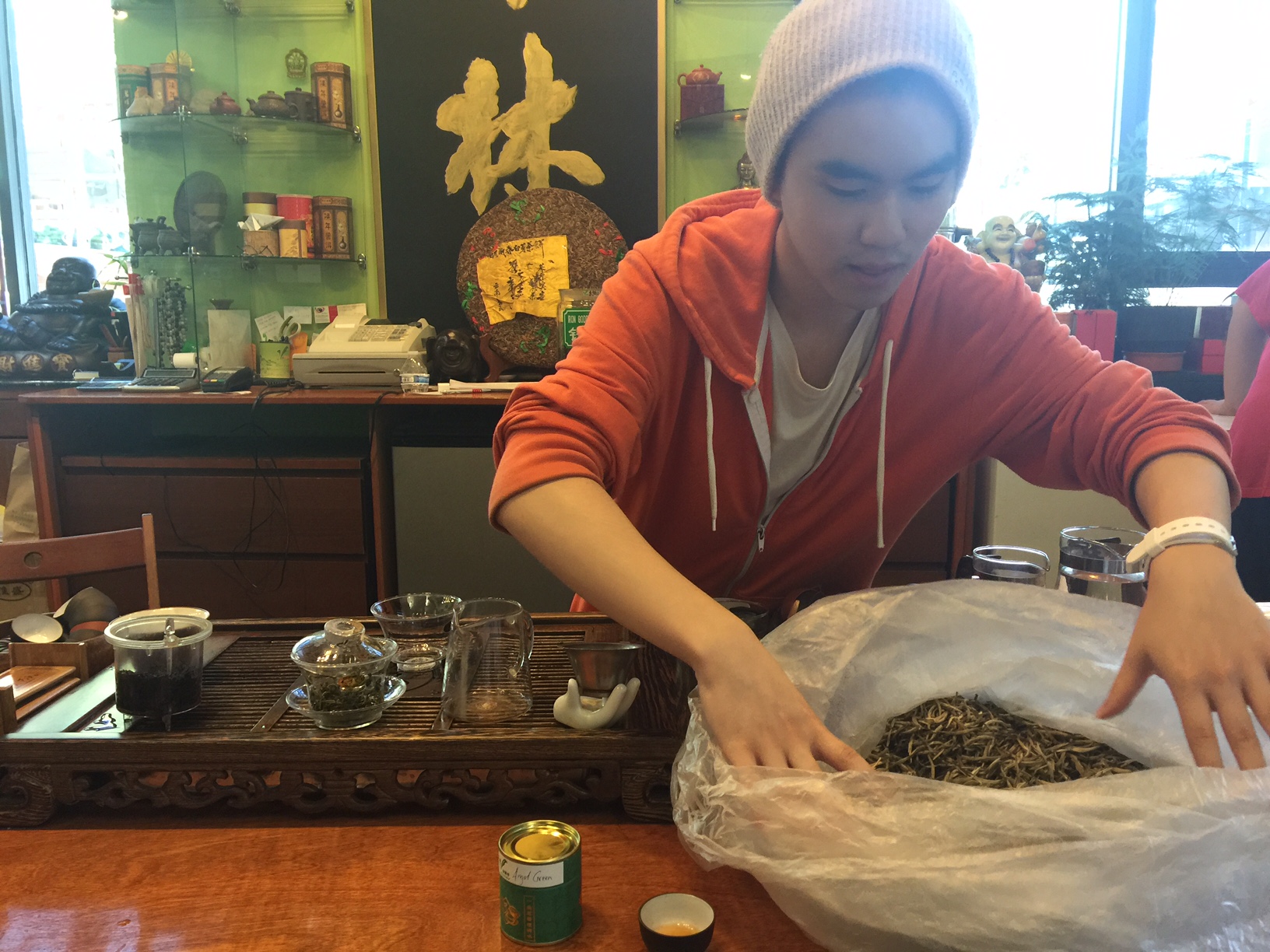 After gazing admiringly at massive lobster tails, gigantic crab legs, and fresh caught fish in Seattle’s famous touristy Pike Place Fish Market, we also explored America’s oldest farmers market looking at the produce stalls, artisan and imported products, specialty foods, and restaurants, cafes, and bakeries. The Biscuit Bitch from Caffe Lieto caught my eye as they served these southern style biscuits with gravy and apparently cheese in the dough. Pike Place Chowder would have been high on my noshing list if we weren’t on our way to lunch in west Seattle. As we grabbed an Uber outside the open air market we witnessed a lingering line at the original Starbucks which opened in 1971. 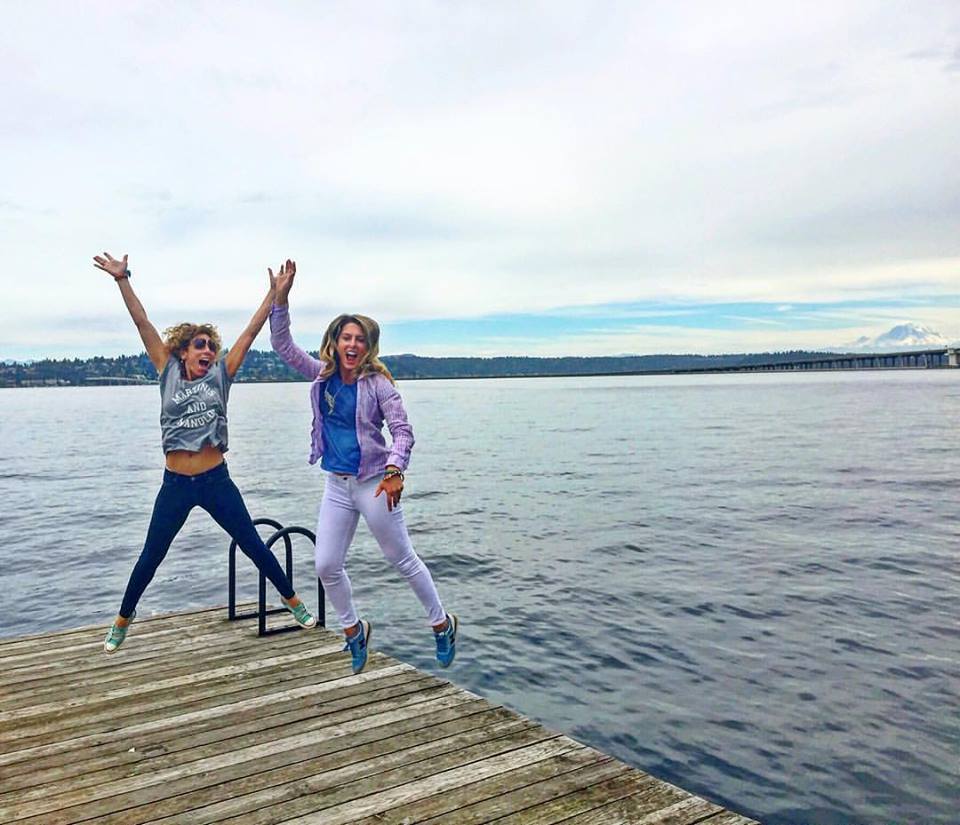 Celebrating in Leschi. LaLaScoop in Seattle.

Marination Mai Kai was our first destination on our foodie tour and it was by far one of our favorites with its low key picnic style outdoor atmosphere near Alki Beach. Even with a queasy stomach and sweating in the 90 degree sun, I managed to enjoy this Hawaiian-Korean curb cuisine. Our favorite sandwich was the Pork Katsu with a panko-crusted pork cutlet blowing up a Macrina ciabatta bun with red onion, tangy slaw and Bulldog sauce (like tonkatsu sauce with some kick). Fish tacos on two four-inch corn tortillas were only $3 each with a miso sake marinade, and could be ordered with kalbi beef, miso ginger chicken, spicy pork or sexy tofu. Each taco came with slaw, pickled jalapeños and Nunya sauce. 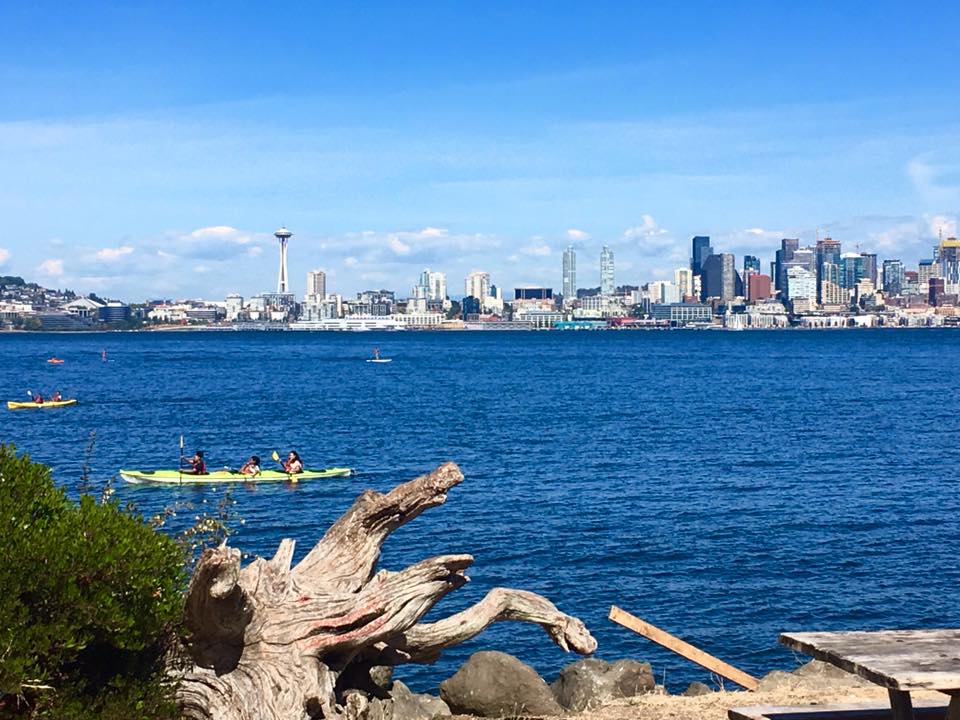 We wish we had room for the Kimchi Fried Rice Bowls and Kimchi Quesadillas. Aloha style will even get you an order of  Mac’ and Spam or a slider on a soft-style Hawaiian roll with kalua pork or Spam, layered with slaw and Nunya sauce. Started with a truck, the Marination brand is definitely a Seattle winner! Enjoy one of their unique craft beers or island cocktails right on the water gazing at the entire city. The beautiful part about leaving west Seattle was hopping aboard the fast water taxi ferry back to the middle of the city. The views were gorgeous on this sparkly sunny day. 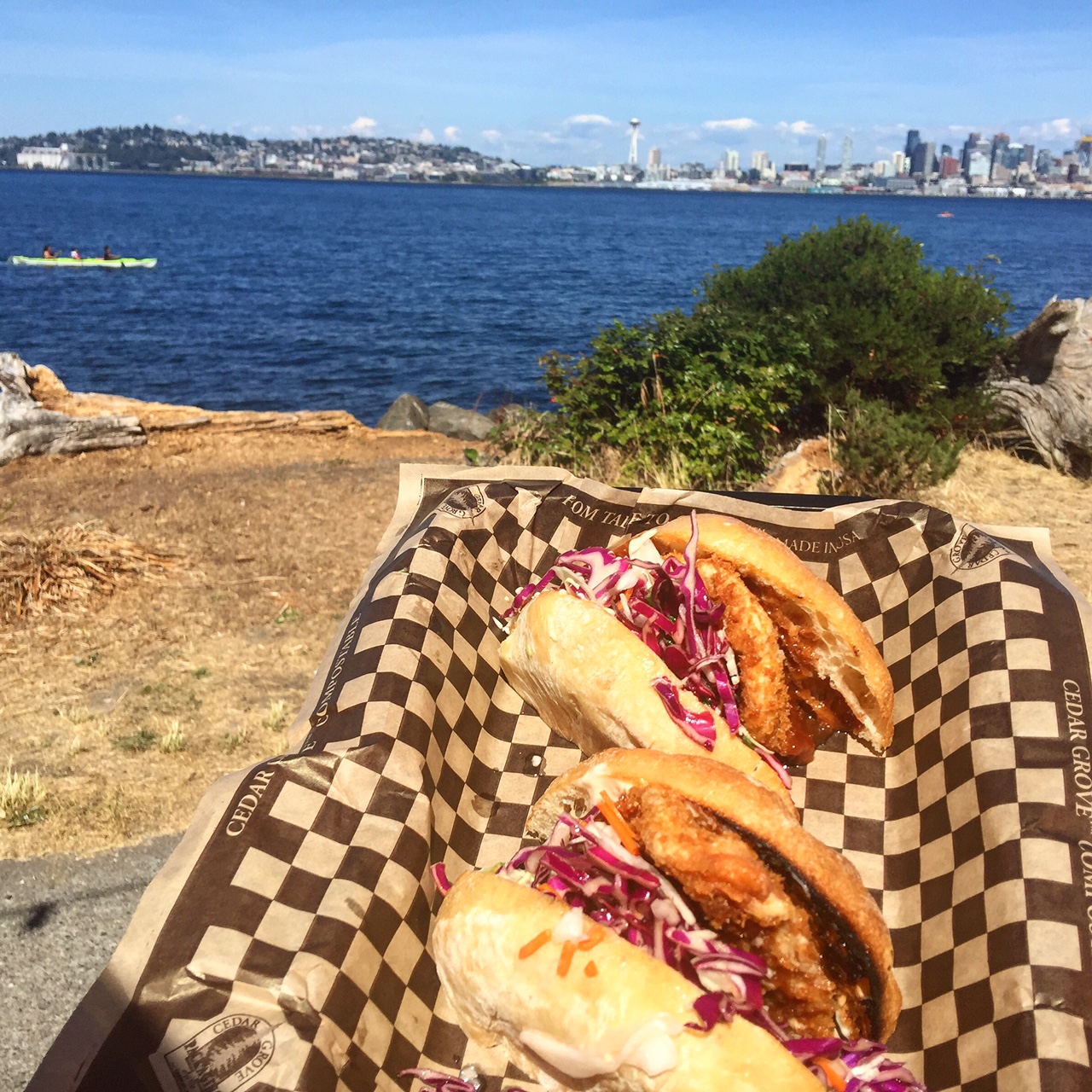 Our next stop was The Nest, a sexy outdoor space on the roof of the Thompson Hotel. The sunset was breathtaking with sweeping views of the Puget Sound. If you didn’t see the city below with the unobstructed view of Pike Place Market, the Ferris wheel, and Elliott Bay, you would think we were in Santorini. It was a glorious way to enjoy sophisticated cocktails and the city views as the water sparkled for miles. 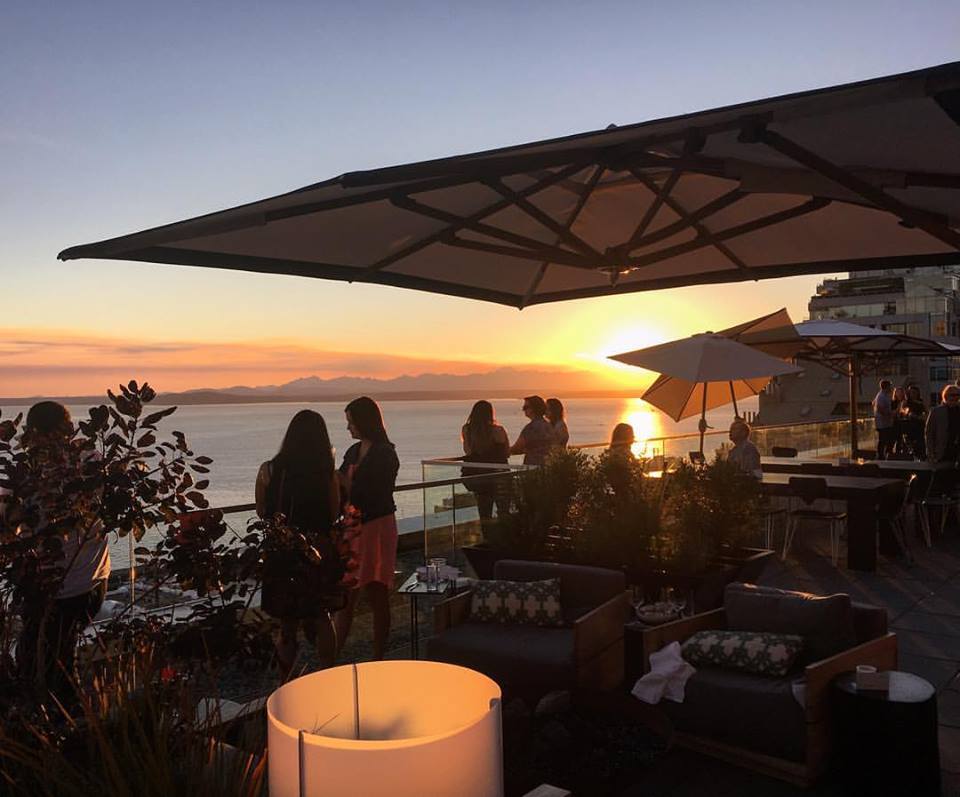 The Nest on the rooftop of the Thompson Hotel.

Sip on gourmet cocktails so well executed with bird names like JungleBird, Laughing Gull, Hummingbird, and Juniper Titmouse. Nibble on gourmet snack bites from oysters, marinated olives, salt and vinegar popcorn, and fried pork rinds. As you can expect, the service was top notch. Our time here really felt like we were on top of the world in a chic ‘Nest’ and was one of the major highlights of our time in Seattle. 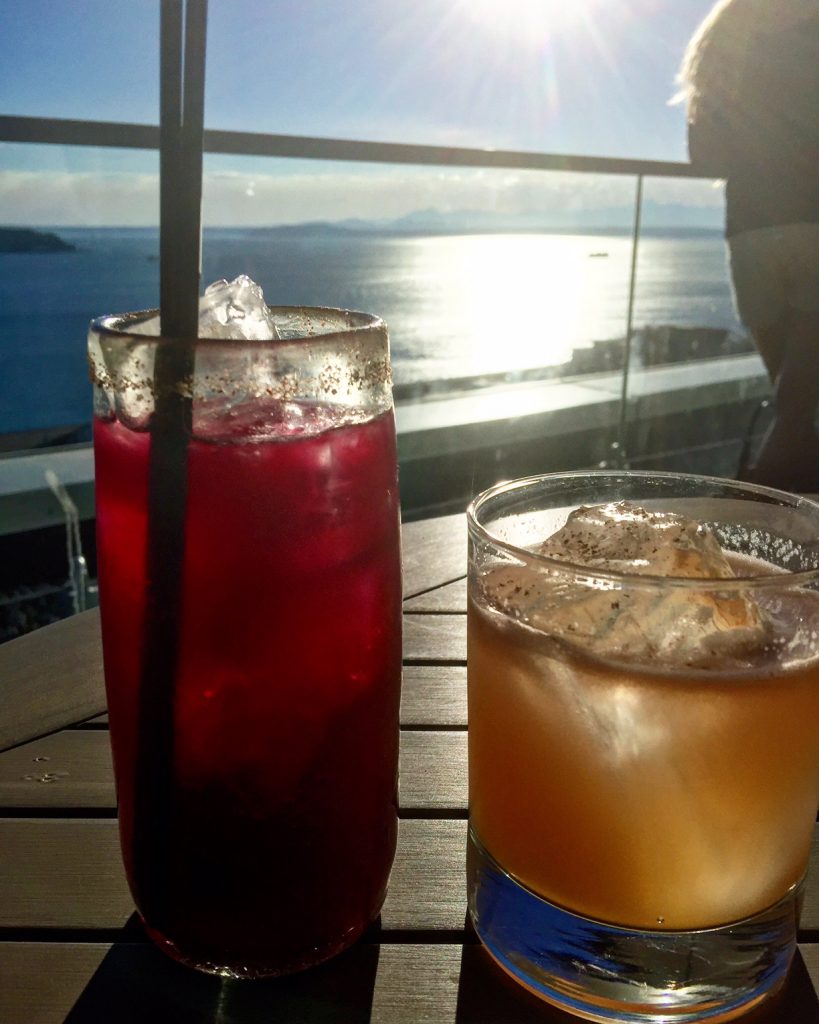 Sunset cocktails at The Nest, on top of the Thompson Hotel.

Since we were staying in the neighborhood called Leschi facing Mercer Island, we walked around this quaint area on the water surrounded by trees and parks. Passing mini marinas and basking in the glory of the glistening water, Meet the Moon was a delightful restaurant to eat outdoors for soups, salads, sandwiches, tacos, poke bowls, or even what they call Snacks like avocado toast or guacamole.

On Saturday morning we ventured to Sweetgrass Food Co, an uber healthy cafe offering mainly vegan and gluten-free options. This bright space in Westlake/Downtown we quickly learned from customers was the place to also get your morning cup of joe. Their Sweetgrass Coffee is blended with organic grass-fed butter and coconut oil, plus you can add raw cacao or agave. Matcha, Balinese tea and even broths are on their “So LA” menu. Our day began with a fresh juice tasting of red, green, and yellow samplers followed by sweet buckwheat snail cookies and a mira bar. 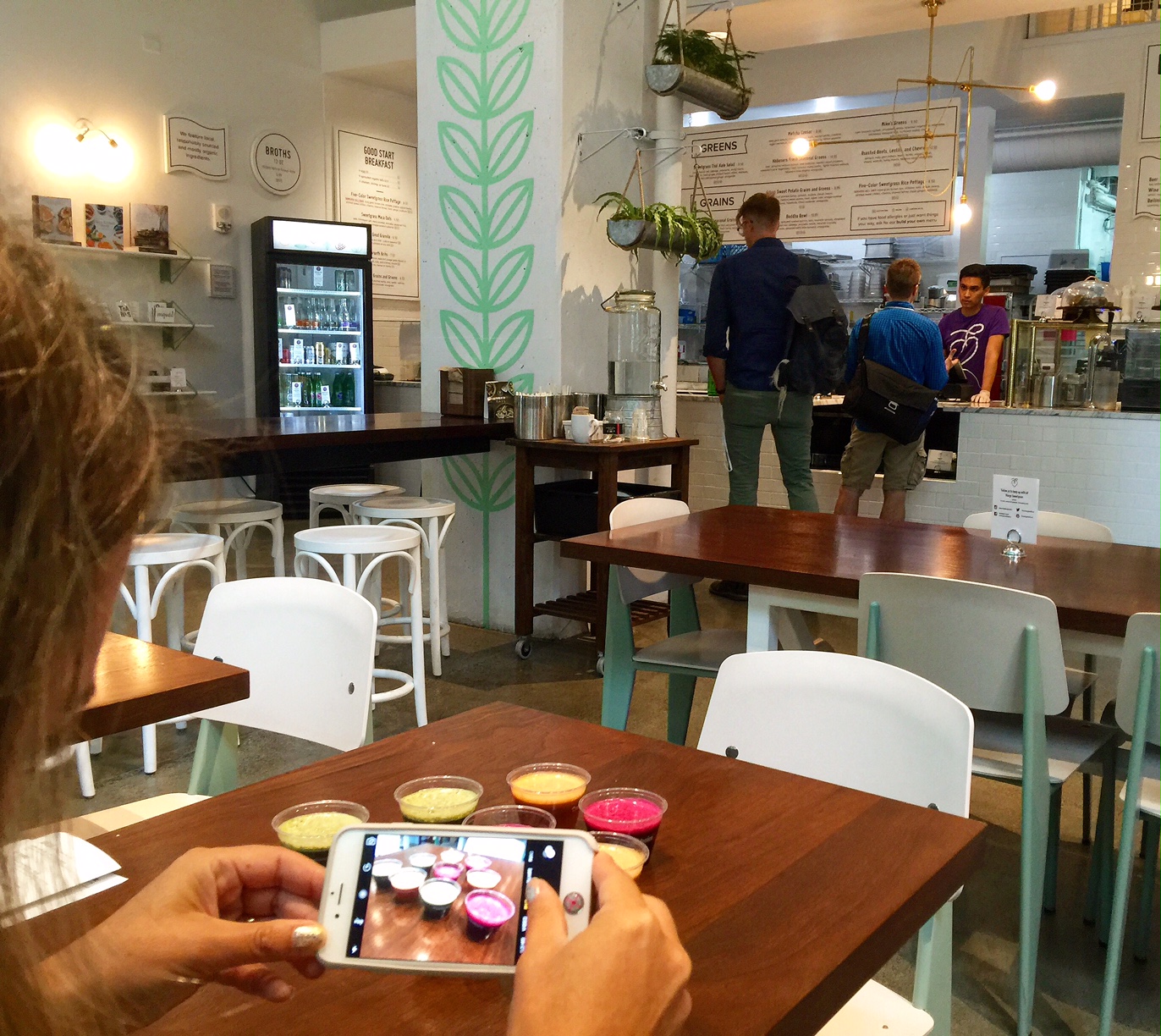 Our absolute favorite bites included the Chia Pudding with raw pumpkin seeds, sunflower seeds, and golden berries along with the Amaranth Grits with fruit, nuts, and a yummy honey drizzle. The Five Color Sweetgrass Rice Pottage was super hearty with short grain brown rice, shiitake, kale, adzuki beans, pickled sweet chilies, cilantro, shaved fennel, fresh ginger, and scallions. For hardcore fuel, try the Soaked Oats with brazil nut-hemp milk, fruit compote, dried figs, and hemp hearts. Their whole food menu is made in-house. If you care about what you put into your body, this is definitely the place to frequent. 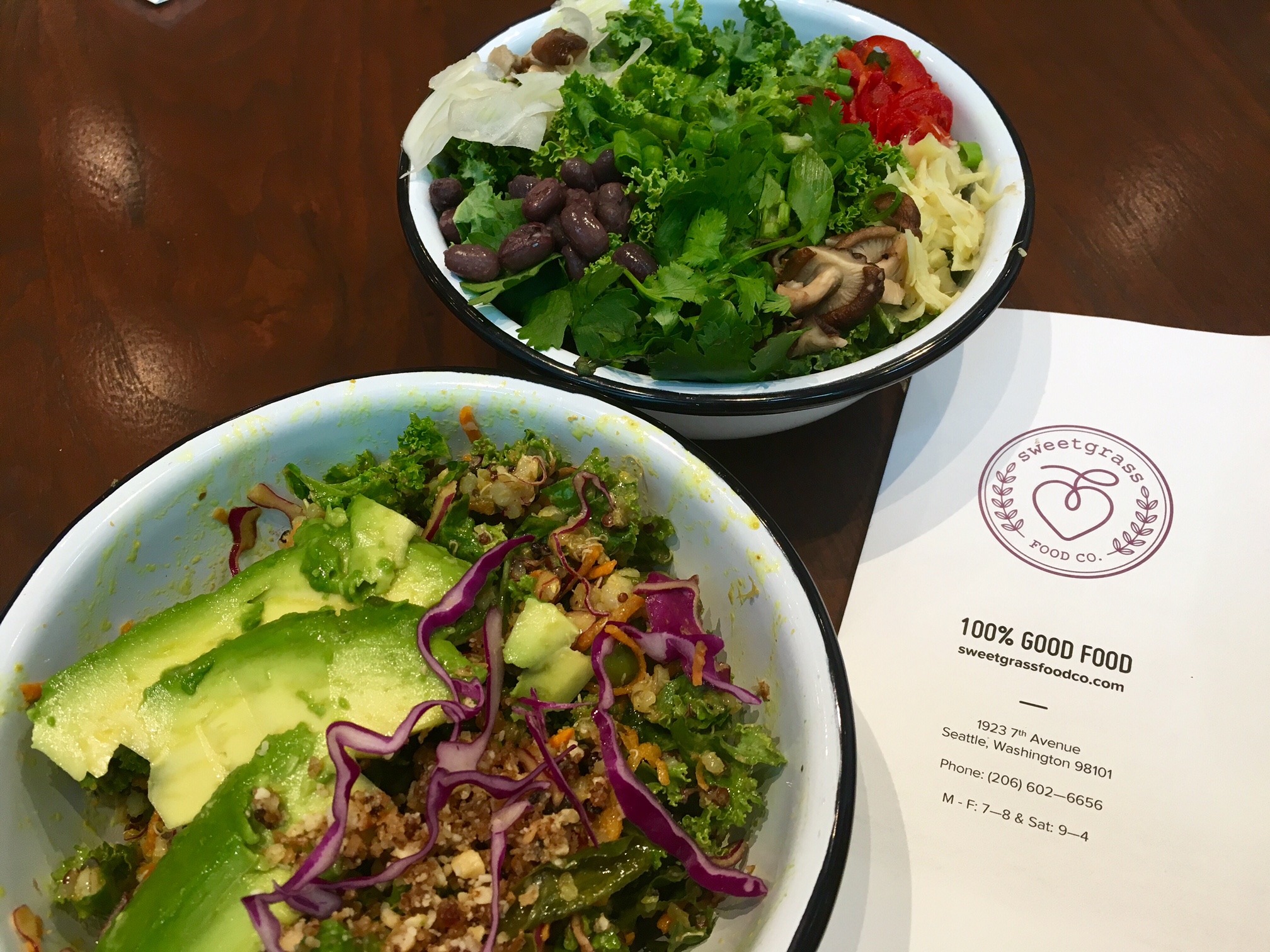 Capitol Cider was on our dinner agenda in the hip area of Capitol Hill. Known for their incredibly lusty long cider menu with over 30 hard ciders on tap; they also offer gluten-free food. If you don’t like your brew choice, they will bring you another. We entered this dark old-fashionedy pub with George Washington on the wall and sidled up in a cozy wooden booth ready to choose a beer flight. Make sure to taste the Meade and the organic IPA nitro. Our dinner consisted of plump mussels much bigger than east coast mussels (less flavor and less orange but still savory), burrata with grilled peaches, oysters, and grilled Portobello mushrooms and snap peas. 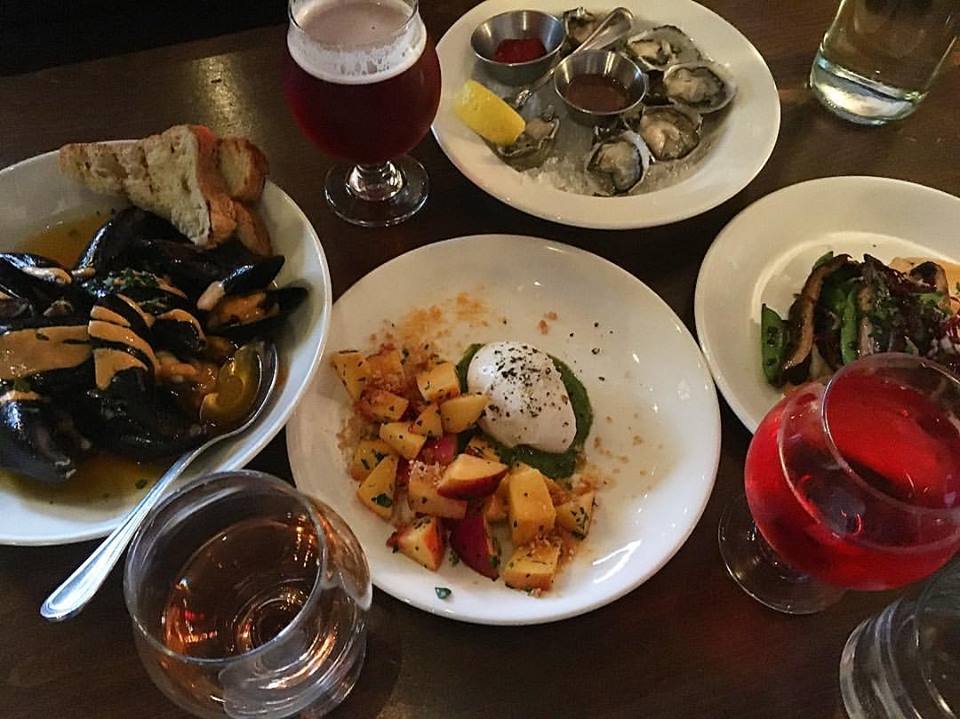 Drinks continued at Vons 1000 Spirits with an insanely massive booze selection showcasing     Sanctified vodka, barrel aged tequila, and Jumipered gin. Their Happy Hour becomes happy again from ten to midnight daily. Their house made vodka is filtered in pure activated charcoal for eight hours to remove impurities, so of course I ordered the Ricochet Rabbit combining vodka with muddled cucumber and fresh pressed grapefruit. For a manly drink, opt for the Mayahuel McCullaugh, a tequila with scotch. My own man loved it! We may have come for the drinks, but we couldn’t resist trying what they are also known for –  sourdough! Our bellies were stretched, so we chose to forgo the sourdough pizza and sampled their sourdough pasta instead with four different sauces. 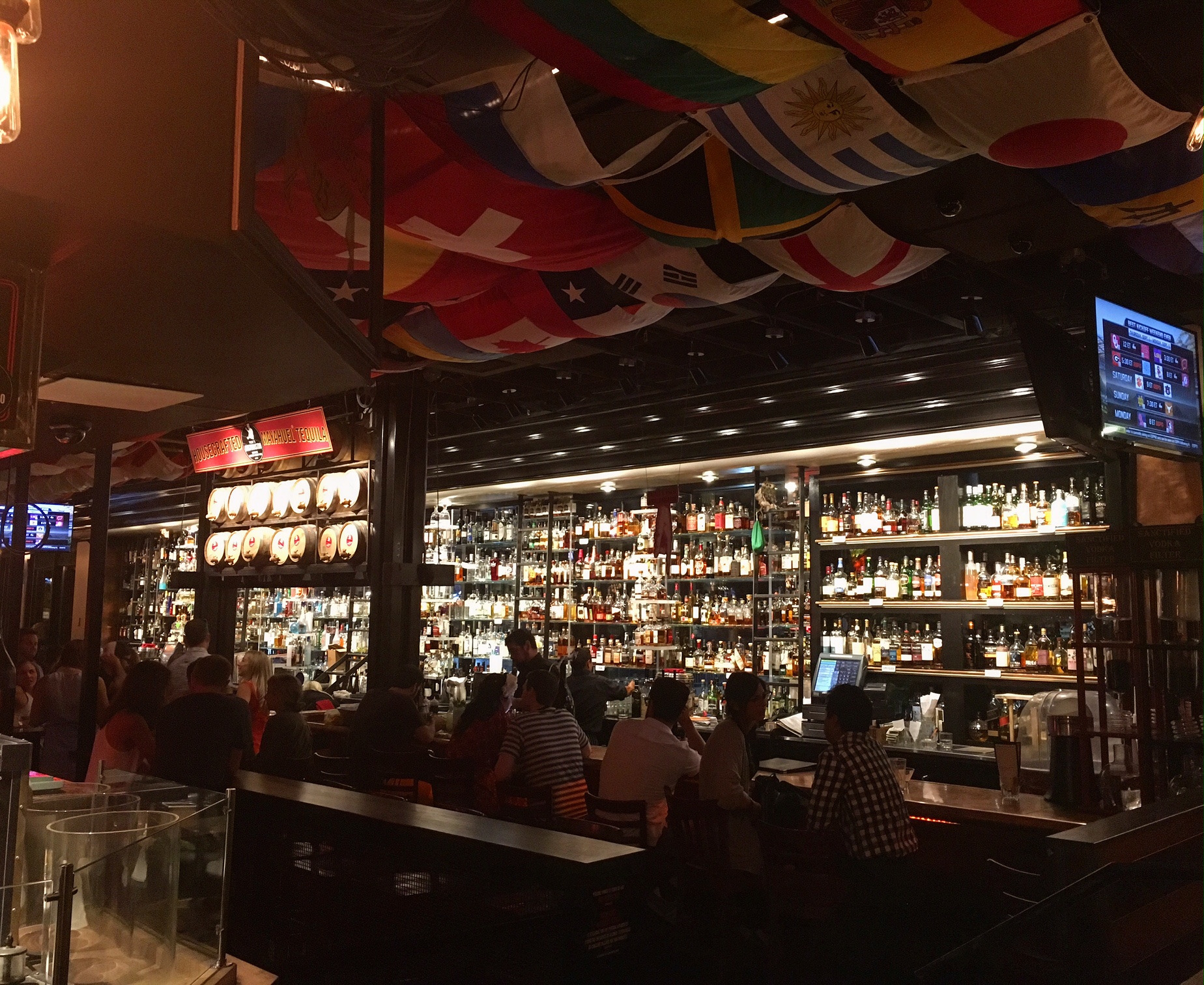 Early Saturday evening we ventured to The Good Bar in historic Pioneer Square not knowing what to expect, and leaving blown away by their artisanal cocktail menu, by far our favorite drinks in Seattle. Our skilled bartender continued to delight us with his mastery in this old bank building. Every drink we sampled was so well thought out that three of us sampled a plethora of spirits  and literally loved every single one. The Japanese Commercial Bank #2 was one of my favorites with shochu, lychee liquer, yuzu, shiso tincture, and orange oil. The Irish Iced Latte sold me with its Irish whiskey, elm single origin coffee, madagascar vanilla, dark beer, whole milk, and nutmeg. The Tempest, the Order of the Phoenix, The Kingpin, Pimm’s Cup, and Grandma’s Ferrari are sure to tickle your fancy, but the price point coming from LA is shocking. These tasty concoctions were only $10 -$11. 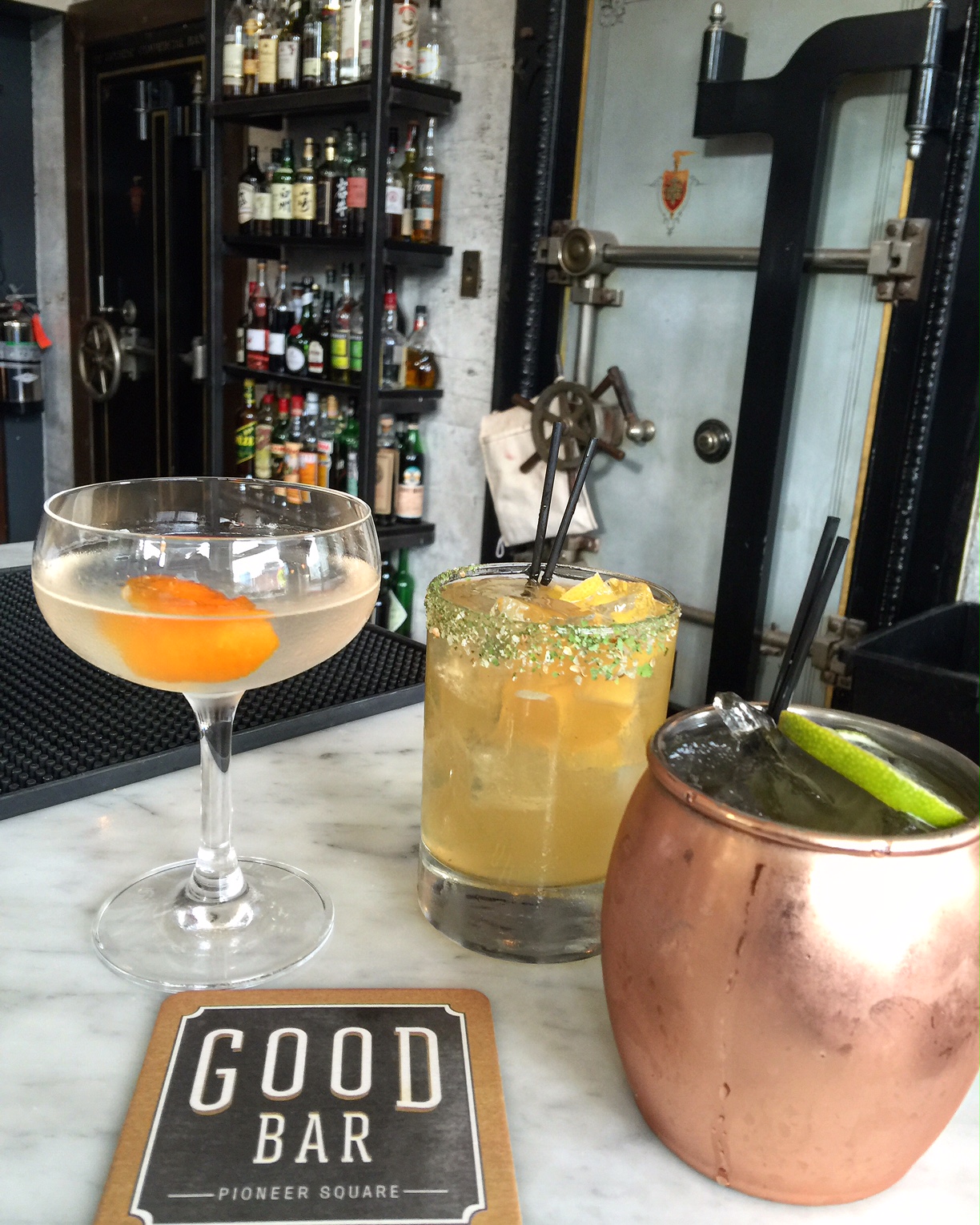 The Good Bar is more than good.

The Good Bar also brings very good food. The sardines with green beans, shallot, crispy potatoes, sherry vinaigrette and anchovy aioli was highly memorable along with their plate of roasted mussels with saffron. The end of our robust sampling included a final toast with a fine Italian liquor called Meletti. We were very sad to leave this airy light filled friendly establishment. If we had more time, we would have stayed longer, then found the bar with mini golf that was just around the corner. 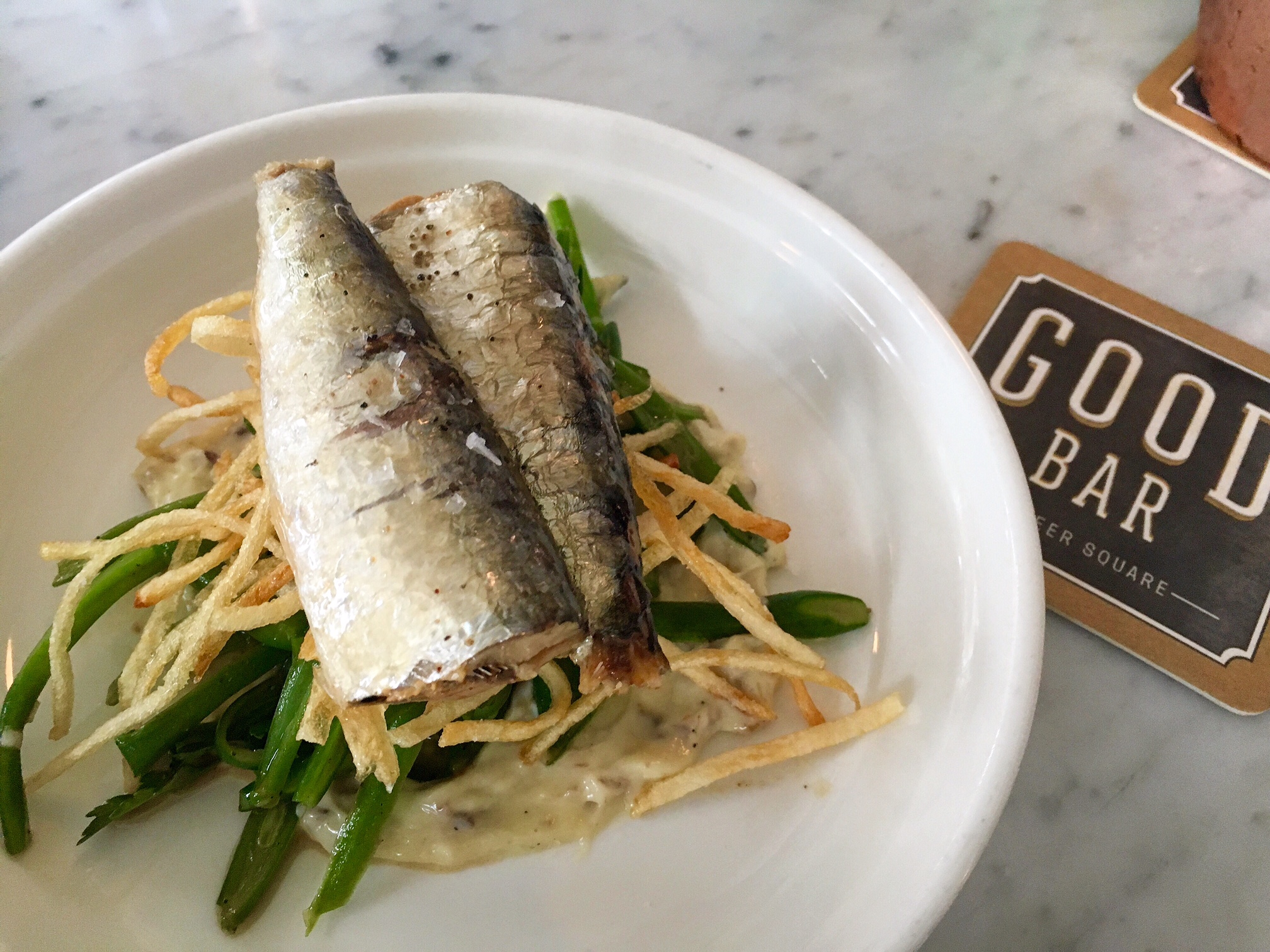 Sardines in Seattle at The Good Bar.

Quinn’s Pub in Capitol Hill was our next stop for London style pub fare modeled after The Spotted Pig in New York City. This dark packed gastro pub was another venue with an extensive curated beer selection with numerous Trappist and Belgium beers. Something quite hard to find in Los Angeles. To soak up our beer, we enjoyed the warm Pretzel with Welsh Rarebit, a creamy blend. The Scotch Egg with house made sausage is rare to find in America, and the Foie Gras Frites with shaved foie gras and foie gras sauce is not for the faint of heart. Their comfort food menu even includes Wild Boar Sloppy Joe. 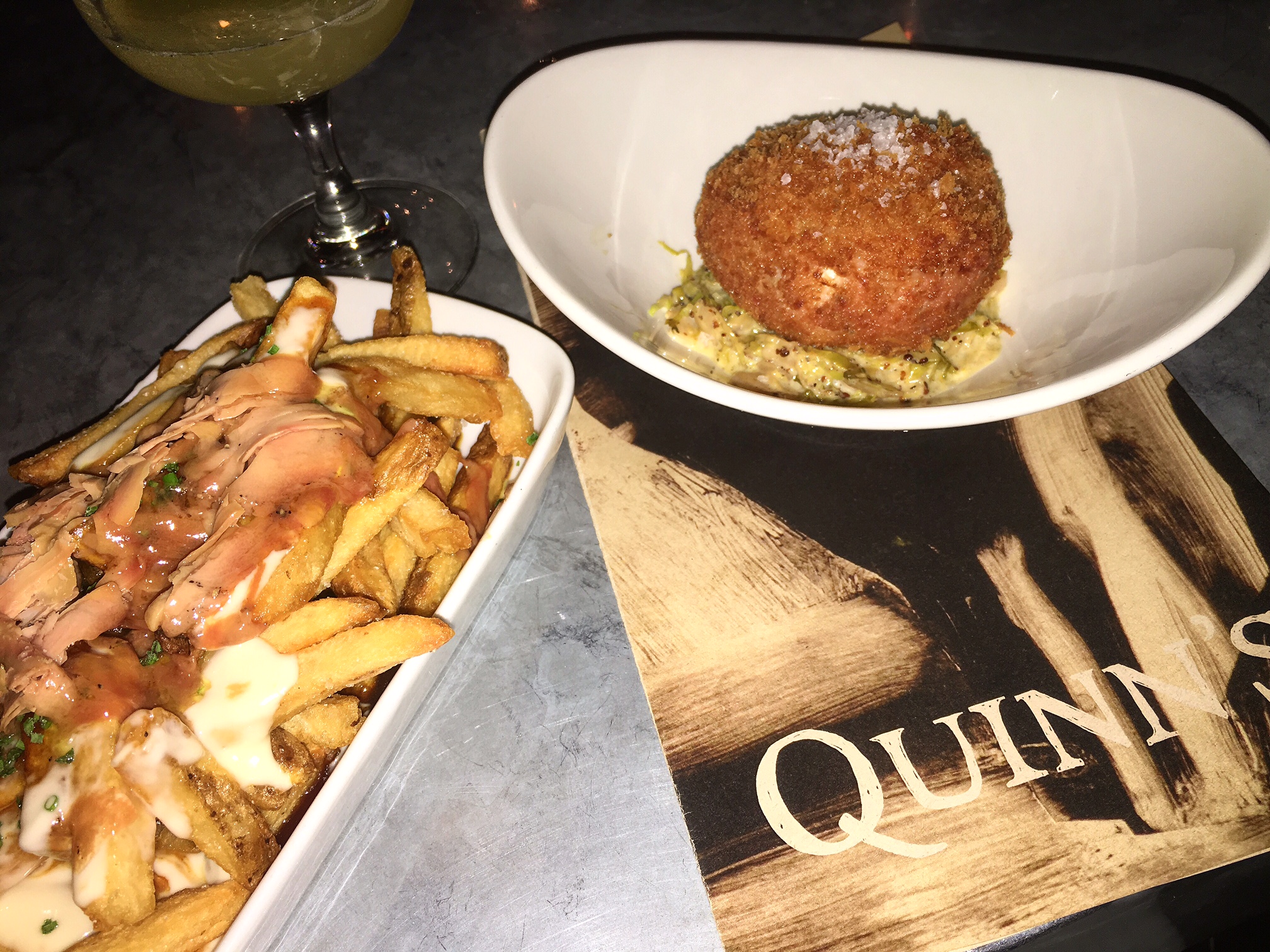 The final foodie hurrah had us venturing to brunch in Colombia City to a vintage garage space restaurant called Super Six. Literally don’t eat all day before you come here. The Asian Hawaiian influence was where we began in Seattle at Marination Mai Kai and now we ended our 3 1/2 days sleepless in Seattle food-coma style. To start your morning, order the Malasada or airy Hawaiian doughnuts filled with coconut cream or chocolate. Next, split the Pineapple Cornbread. We devoured the Buttermilk Biscuit and Gravy with Eggs, Pancakes with toasted macadamia butter, Sesame Coconut Cereal, and The Hangover, kalua pork, gravy, cheese, scallions, and a fried egg over fries. Stumptown coffee, brunch cocktails, and $12 bottomless mimosas will keep your weekend going just groovy. 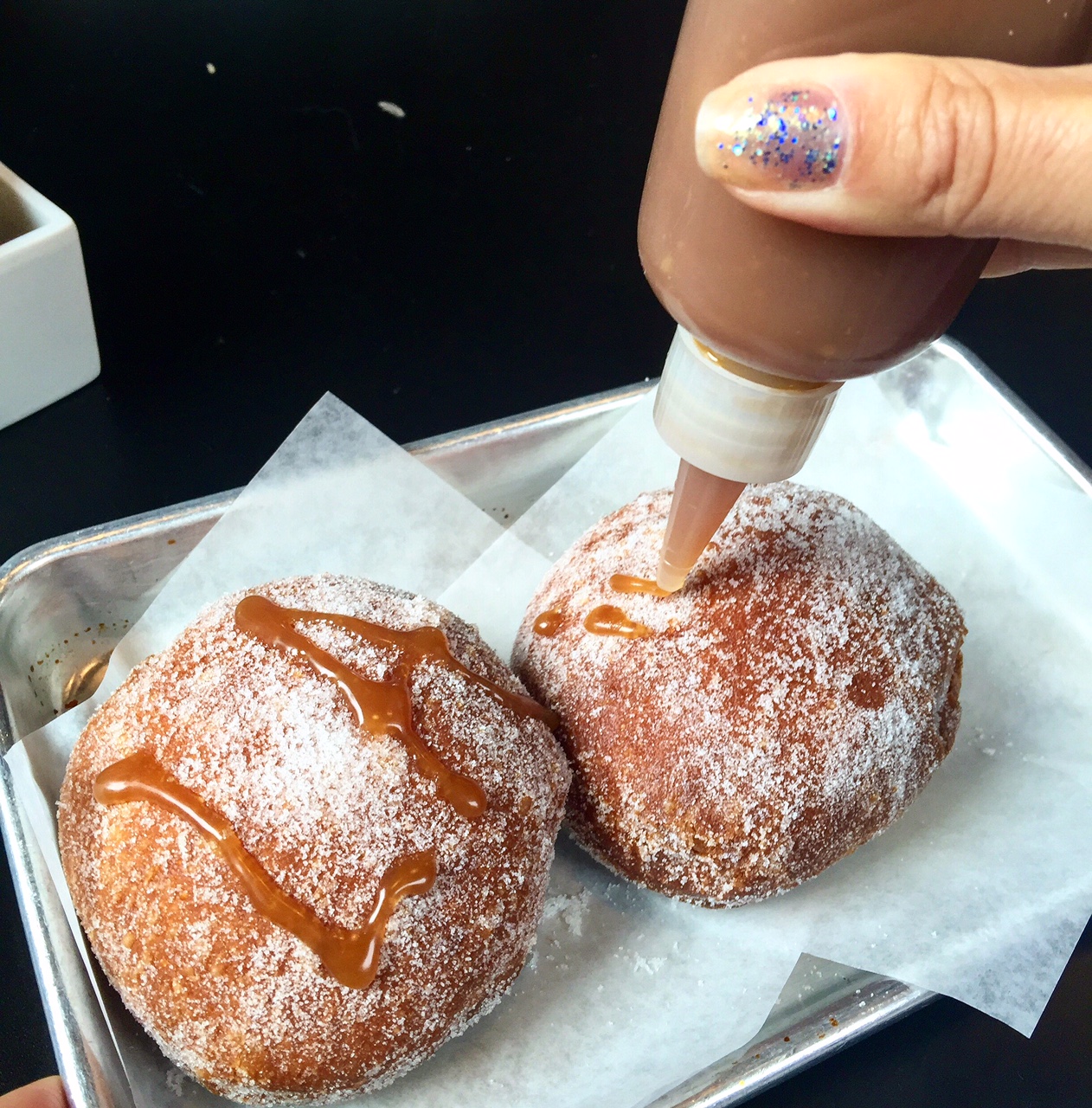 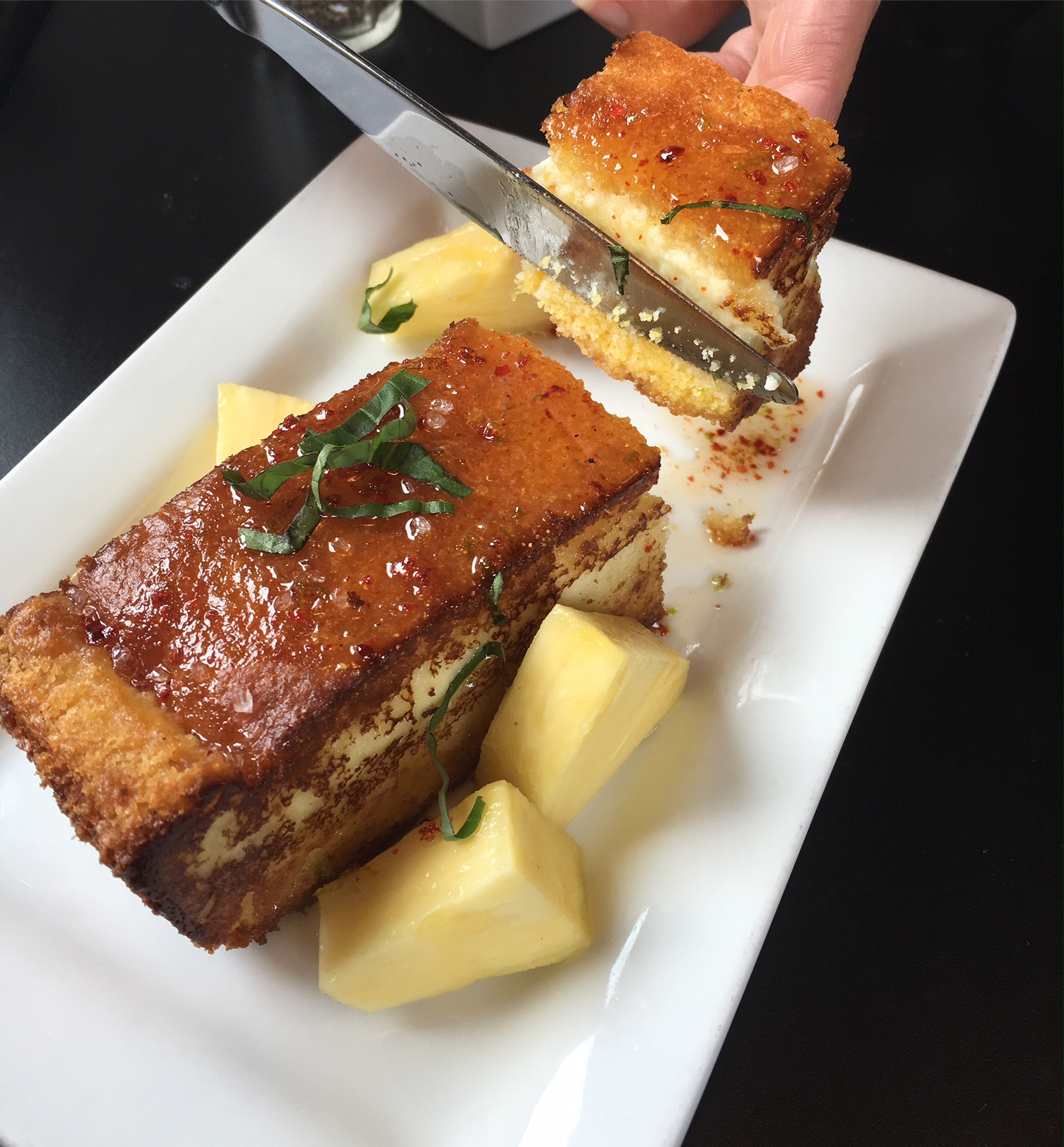 4 thoughts on “Eating and Drinking our Way Through Seattle”