Skip to content
This article was previously posted on WeSaidGoTravel.

Portland impressed me as soon as we landed because due to so many green trees the air felt so pure and fresh, whether that is the Pacific northwest or my 9 years oxygen-less in the Los Angeles desert, I couldn’t stop wanting to breath the air deep into my lungs. I quickly learned the best way to see this city with numerous bridges is on a bike. 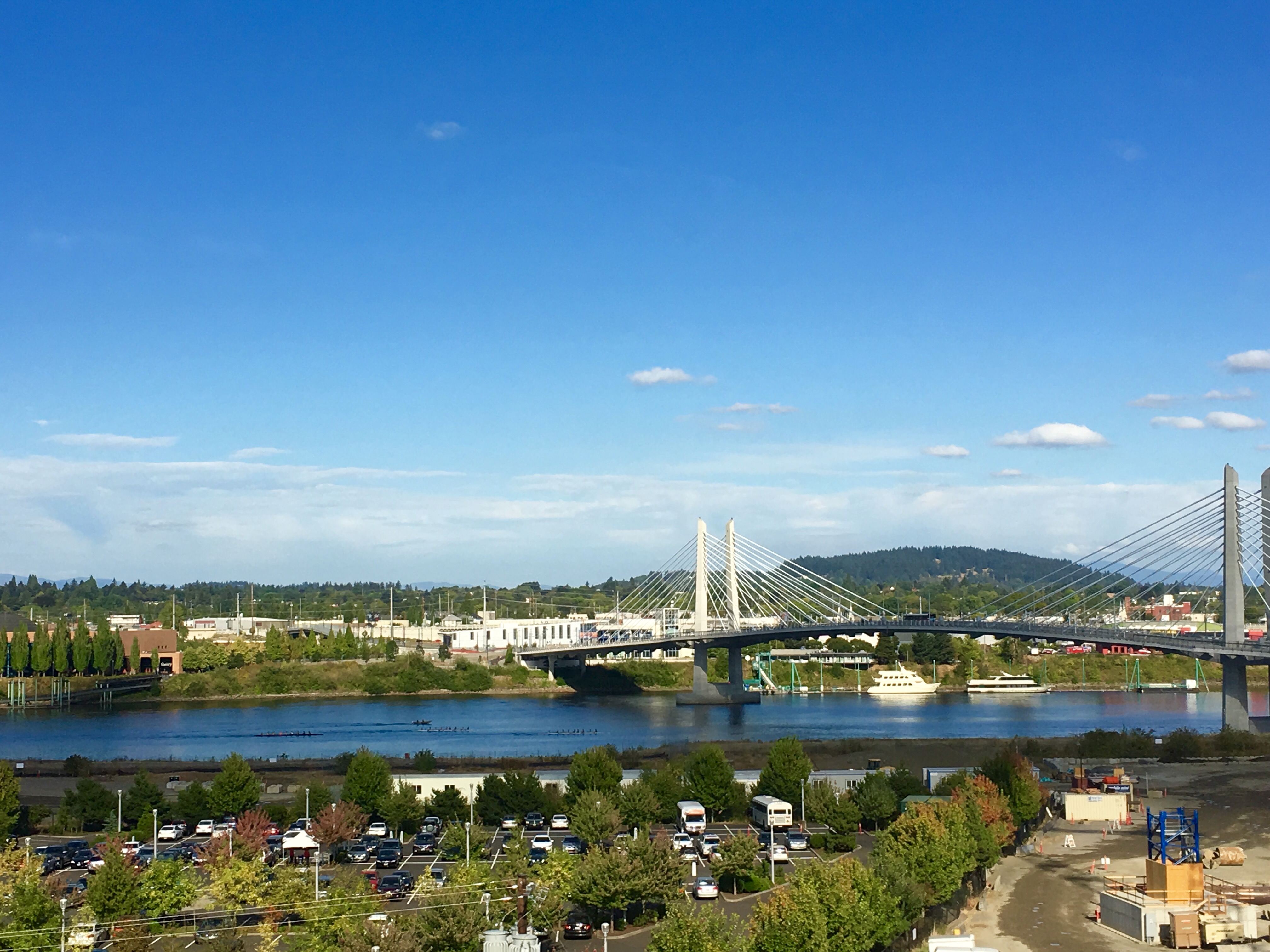 The first night we arrived my boyfriend’s sister took us for a walk down Hawthorne, a closed off street having a Sunday street fair where the vibe was just what I expected from Angelenos who told me about their time in Portland…..very Silver Lake/Los Feliz-ish but more earthy. After spending a couple days exploring I realized that Portland felt like one big Silver Lake, a hip or some would say grungy “hipster” area in Los Angeles, but here in Portlandia it felt like everyone was cool without trying to be cool.

To satisfy my food curiosity of this well known gastronomic city, we were taken to Tidbit Food Farm and Garden, food carts located off of Division, an area filled with some of the best eats all served out of stationary hitches. We passed Dog Town Food Cart, E-San (Thai), Smaaken Waffle Sandwiches, Indian food, burgers, beer selections, and many more mouth watering options.  I selected Hapa Ramen for their miso ramen, but since it was the end of the night they were out of most options, so I opted for a less healthier broth in my bowl. I couldn’t pass the Greek pod without picking up some Tzatziki sauce and toasted pita ($4). My boyfriend came back with small tostados like tacos, and the beer options were delicious. Remember, Portland is known for its beer and coffee. Pretty much every coffee shop and restaurant in LA serves Stumptown Coffee (think tree stumps) which originated in Portland.

When we awoke for our first full day, we hopped on my boyfriend’s sister’s bikes, kissed her baby goodbye, and sped about 45 minutes through tree lined neighborhoods with vintage cars and endless Subarus, obviously the Portland car of choice. Crossing the Willamette River on our bikes over a steel bridge, we were on a mission to find Ken’s Artisan Bakery. As we whizzed along the river waterfront, and biked alongside an old school freight train, we sped through Chinatown right before viewing the long line at VooDoo Dougnut, another Portland essential. 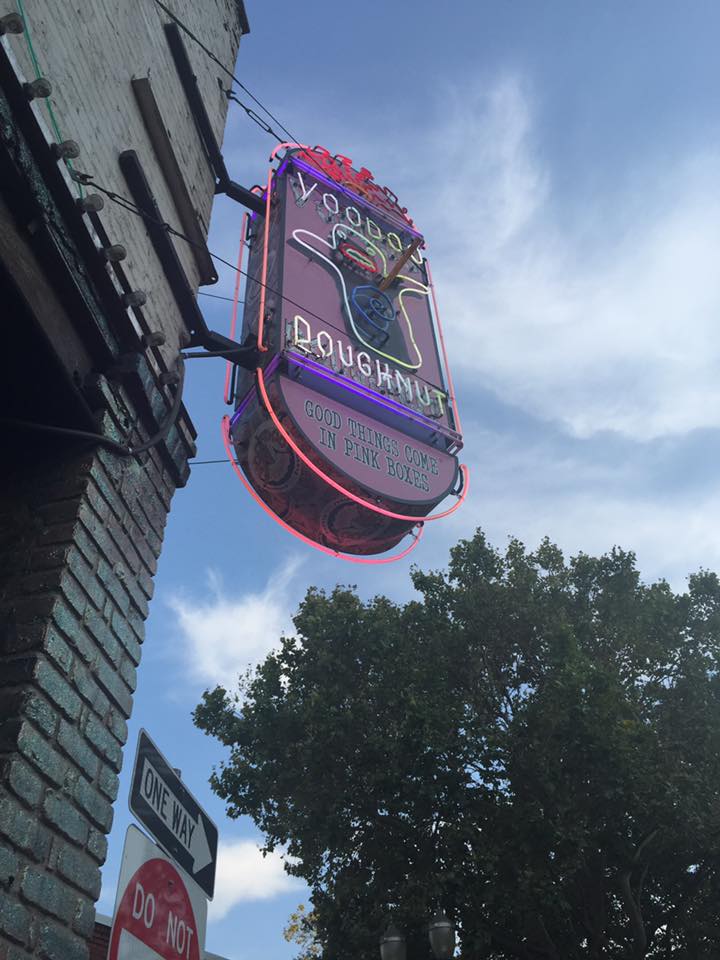 After passing many homeless and many baby strollers, and more greenery, we arrived on a cute street near Burnside ready for brunch at Ken’s Artisan Bakery, known for their freshly baked breads and pastries. Our favorites included the raspberry rose croissant and brioche buns. I enjoyed a pizza sandwich with their perfectly crafted bread. James Beard Award-winner Ken Forkish is the culinary master behind this bakery along with Ken’s Artisan Pizza, Trifecta Annex in Pine Street Market, and a restaurant concept called Trifecta Tavern. His second book, The Elements of Pizza (Ten Speed Press) was just released in March. 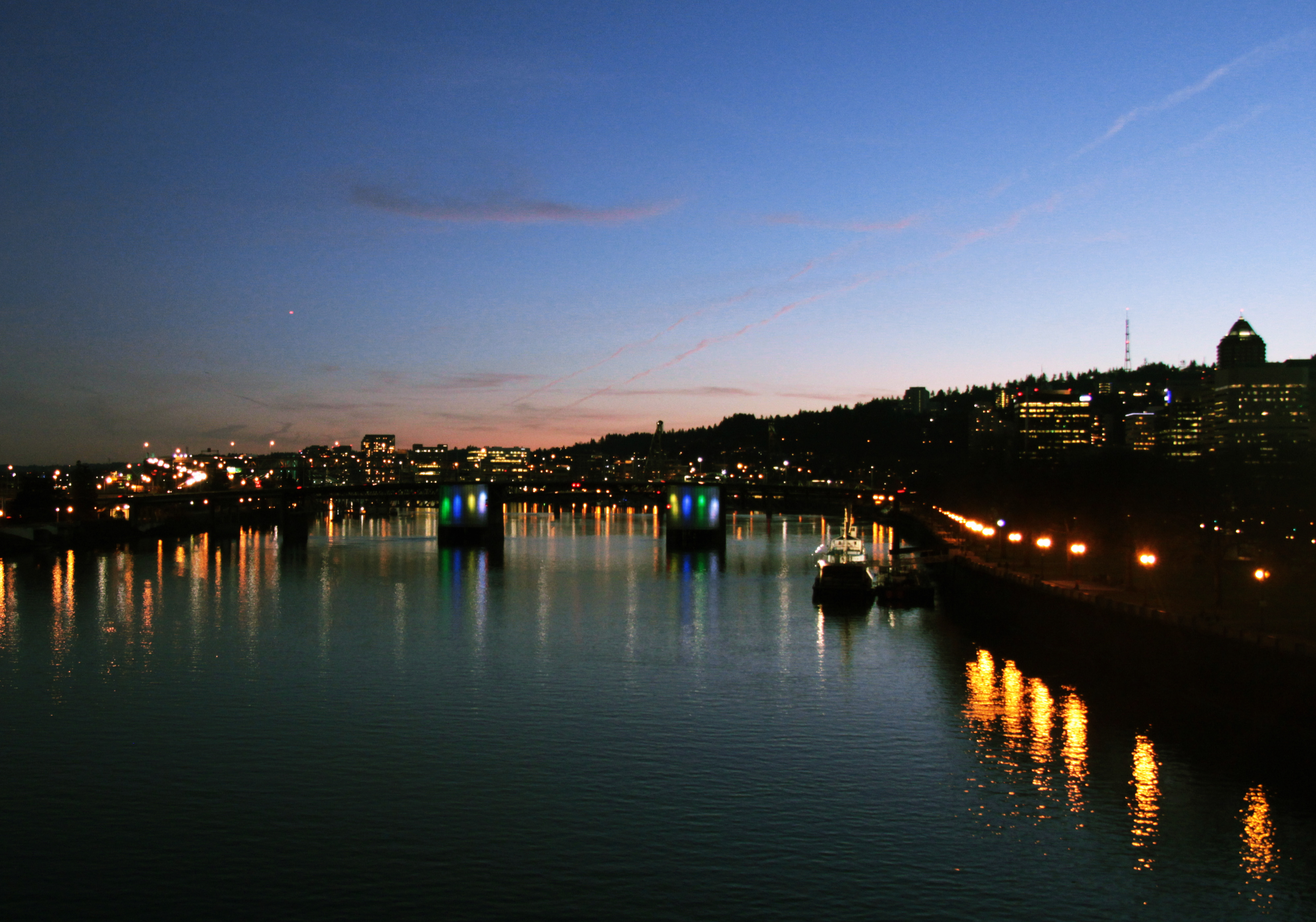 We walked our bikes through streets filled with vintage clothes stores, similar retail shops like the ones on Abbott Kinney in Venice (California), more Subarus, and a tented homeless community, much like downtown LA. Our next destination was the Pine Street Market, Portland’s first food hall marketplace located in a historic Baggage and Carriage Building. Since our bellies were full, we ogled Portland’s famous ice cream (including now soft serve with toppings) called Wizbangbar from Salt and Straw, which also found its way to LA. We admired options like Israeli street food, tapas, ramen, but only had room for a healthy fresh pressed juice.

We careened over the Burnside Bridge back to the area where we started to ‘bike and brew’ up Burnside since we saw many breweries located on that street on the map. Our first stop was the casual Burnside Brewing Co where I fell in love with the craft beer, especially The Riveter made with bee local honey, rose petals, and rose water to brighten and balance the farmhouse yeast. It is a collaboration beer with Do Bongers of Oersoep in the Netherlands. Noble Rot with its city views happened to be closed this early in the afternoon, so we biked on to EastBurn: Eat, Drink, Play devouring some more tasty craft beers from their 19 rotating taps. The prices and craft beer options in Portland can’t be beat! 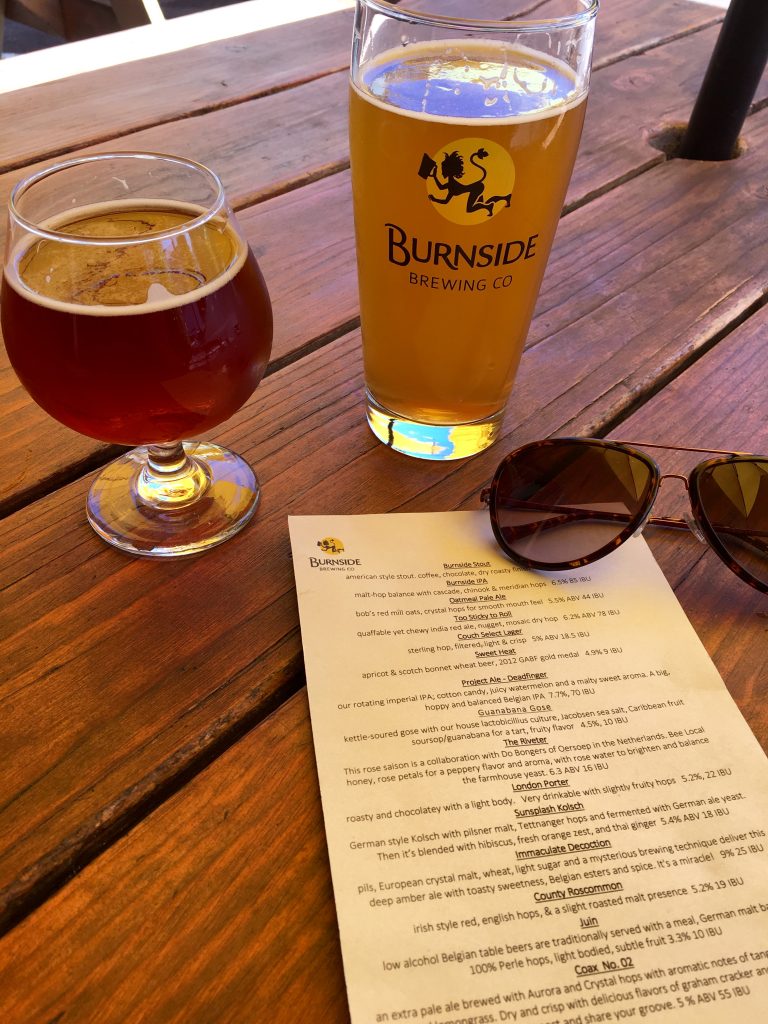 The beer made me feel like we were flying through Laurelhurst Park and before you know it, we were sampling sparkling rose outdoors from Pix Patisserie known for the World’s Best Sparkling and Champagne List for the past 3 years by World of Fine Wine Magazine in London. As we devoured small tapas-style plates of quiche, shrimp, and toasted cheese bread, a flight of sherry (definitely a first) was brought out to accompany our snacks. We later learned that is is one of the best sherry bars in the nation and the goal of Pix Patisserie is to recreate the neighborhood watering holes of San Sebastian. Their wine recommendation included Arca Nova from Portugal, an exquisite $18 bottle of sparkling rose which tasted more like a $100 bottle. 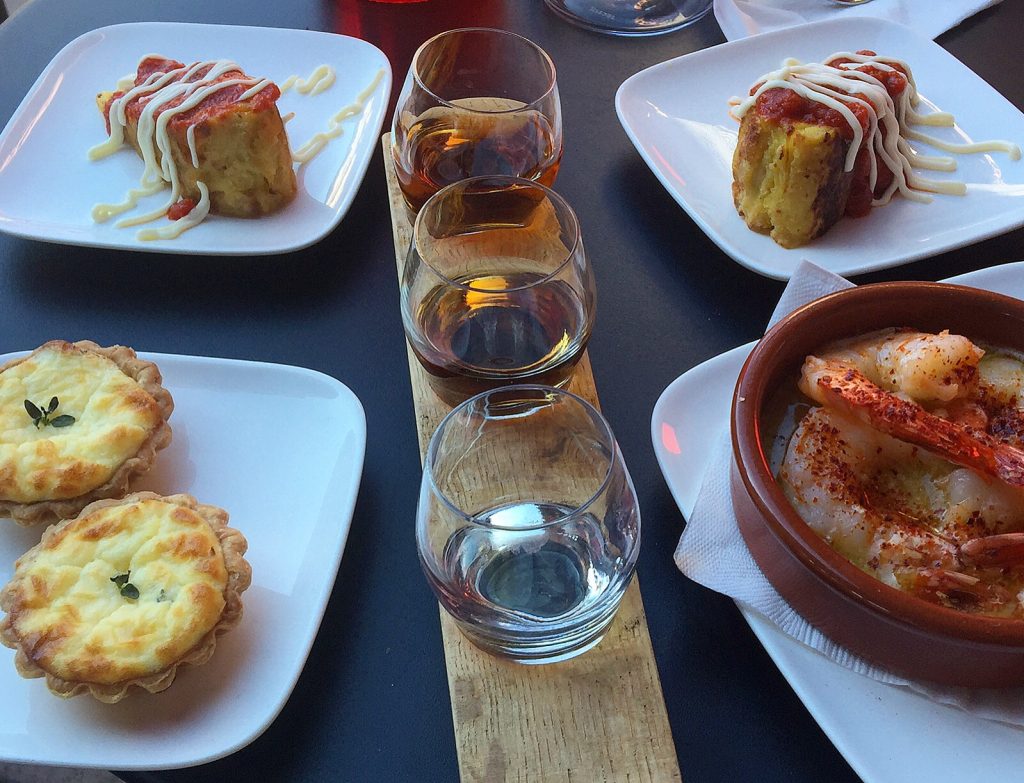 We made sure to save room for their well known innovative French desserts starting with the macaroons. Each small cake creation was beyond decadent, from bits of gold leaf, to lemon and cream cheese mousses disguised as a strawberry, to chocolate eclairs, to the Jane Avril made from almond cake studded with raspberries and pistachios surrounding a raspberry mousse with pistachio cake. The petite Un Fantôme, Un Couteau, Une Nuit or rather Ghosts with Knives After Dark included chocolate mousse, amaretto crème brûlée and raspberries on top of a chocolate sponge cake soaked in Dashe, a late harvest Zinfandel. It looked like blood has been splattered across the top of this inventive cake.  Next time we are back in Portland, we are sampling their ice cream sandwich made from custard, their beer float, and their chocolate churros. 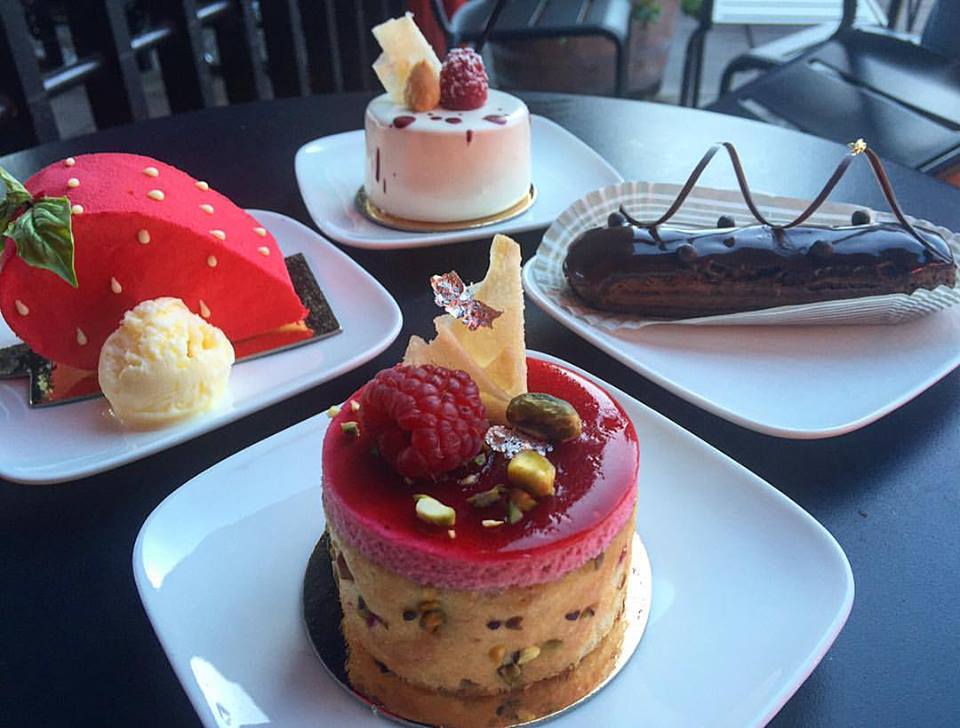 The inventiveness and skill is due to Cheryl Wakerhauser, the pastry perfectionist of Pix Patisserie who frequents France and Spain, where she was once trained. Cheryl has been on a champagne buying mission. Her collection at Pix has grown to over 350 bottles, including vintage and large format, with a focus on small grower producers. Her goal is to make quality wine accessible and affordable and, most importantly, provide a fun atmosphere to drink it in. Pix Patisserie also hosts summer movie nights in their outdoor courtyard projected on the wall. 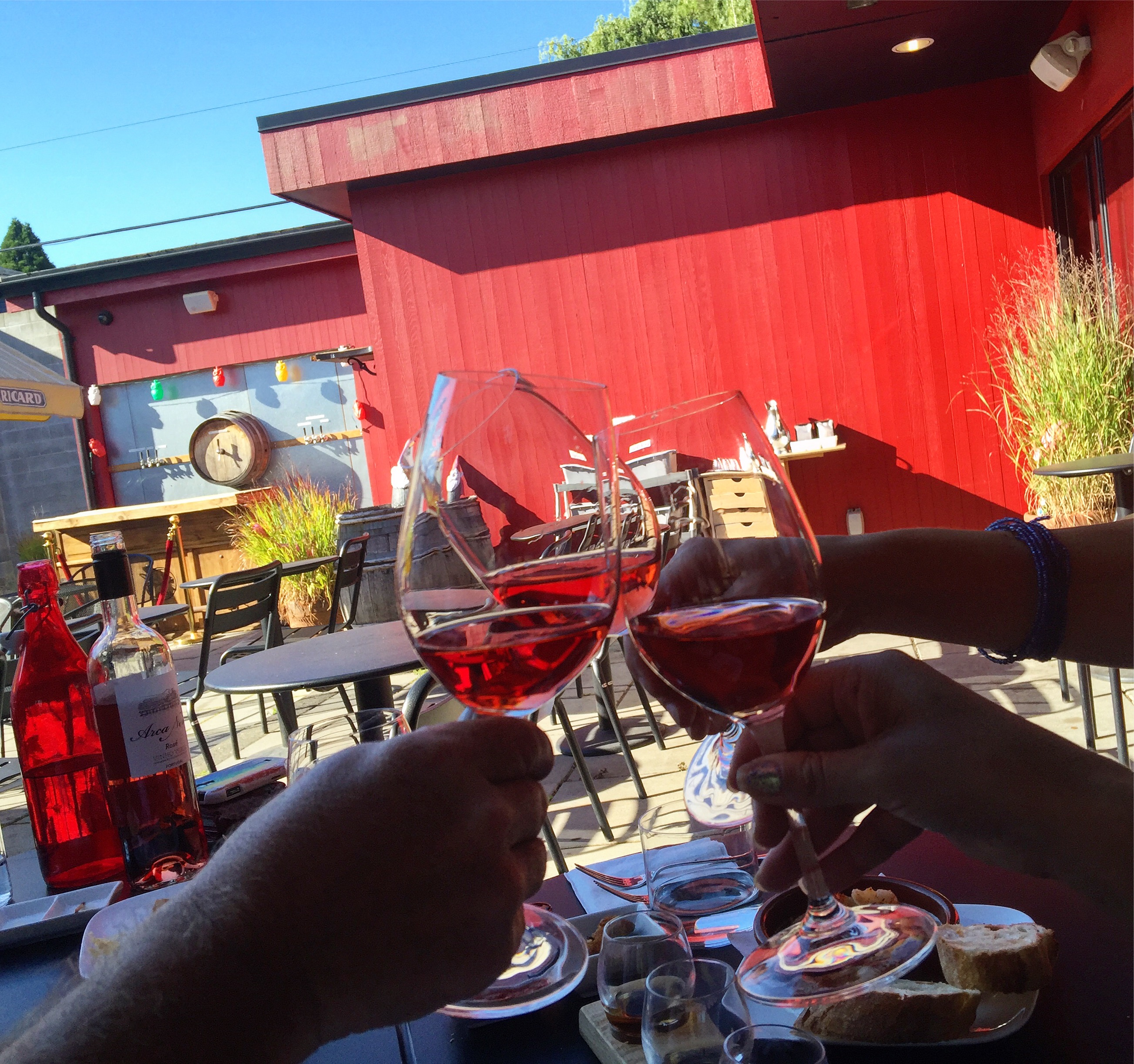 In the evening we ventured to another neat establishment, an old school called the McMenamins Kennedy School, literally an old elementary school converted into cozy pubs, casual restaurant, a theater with bar service, saltwater soaking pool, room with pool tables, and hotel (classrooms turned guestrooms) with weekly music, fire pits, and one-of-a-kind art. Built in 1931 and renovated in 1997, the property sits on five acres and literally commemorates long gone teachers in the hallway. It is worth seeing, if not to sample one of their craft beers and peruse the kitsch halls and decor.

Our last day in Portland before heading to the airport was a winery visit to Brooks Winery, an hour drive outside the city in the Willamette valley. After a scenic drive we stopped first at Stoller Family Estate, an incredibly picturesque vineyard with rolling hills and grand Pacific northwest trees. The architecture of the tasting room with its strong lines really stood out. Two hundred of the 373 acres are dedicated to growing vines. Stoller is the first in in the world to receive LEED Gold certification, rewarding the winery for its sustainability and environmentally friendly design and behaviors. The staff was super hospitable and came out to supply our wine tasting while we enjoyed the breathtaking views outside A tasting flight is $15. Our favorite sips included the Pinot Noir Rose, Chardonnay soaked in oak barrels, and their older Reserve Pinot Noir.

Brooks Winery was our final Oregon destination where we soon learned how this small biodynamic producer is maintaining ecosystems in their gardens, land, and tasting room. Native plants have been reintroduced in their insectary and medicinal herb gardens to ward off pests and attract beneficial insects. Composts are created and used efficiently. This winery also comes with a living legacy, a winemaking collaboration story. Jimi Brooks, the creator, suddenly passed away in 2004 right before the fruit he had contracted from 11 vineyards was days away from being harvested. His friends, also Oregon’s best vintners, keep his passion alive, donating their time and energy to continue the tradition of making beautiful Riesling and Pinot Noir. The outdoor patio with views of the vineyards, gardens, valley, and four mountaintops makes Brooks the ideal setting to sample their wines while pairing one of their house made food menu options. 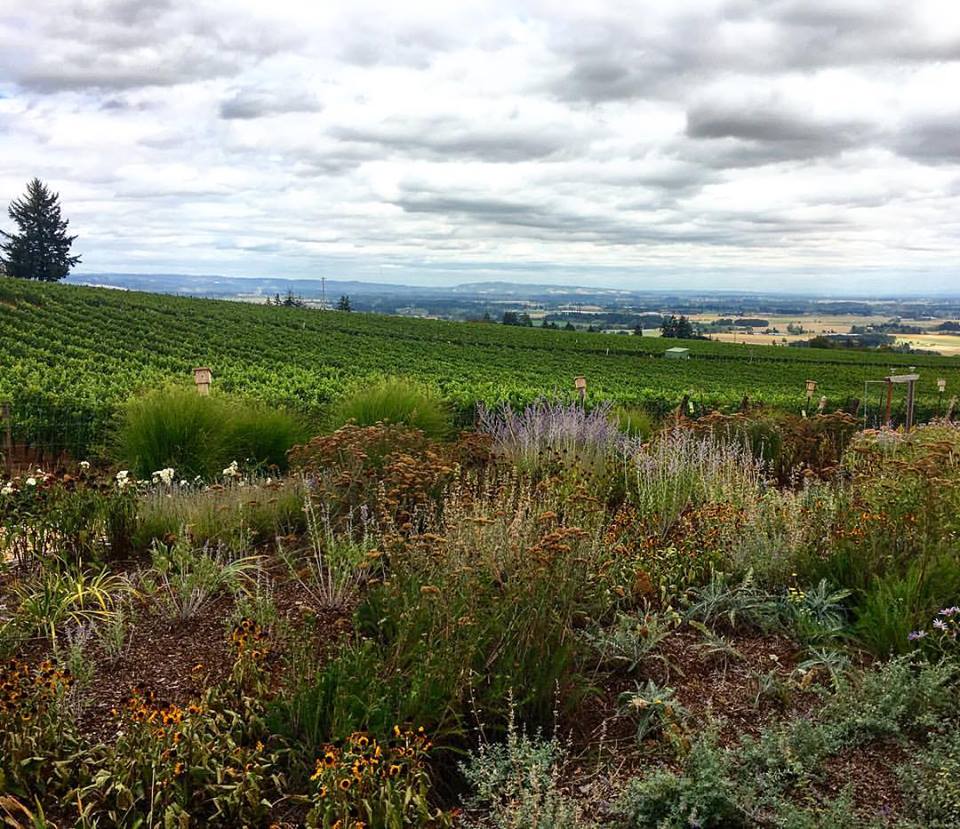 The time to visit PortLAND is now because every second of every day something is happening in PortLAND that isn’t happening anywhere else.