If you live in Los Angeles, you are most likely familiar with D’Amore’s Pizza with locations in West Hollywood (open daily until 4 am), Malibu, Westwood, Thousand Oaks, Tarzana, Camarillo, Calabasas, and Canoga Park. The founder Joseph or “Joe” D’Amore is a super personable guy, just like most Italians we know, greeting and talking to each customer, serving them, and introducing us to one of his managers at the Malibu location who has worked for him for 22 years. Joe proudly shared D’Amore’s was voted the Best Pizza in America and showed me the list next to the door with the other winners around the US. His daughter Caroline, aka “Pizza girl” has recently stepped into the picture as the new face of the family business, launching catering, a mobile pizza truck, new logo, introducing some new menu items, with the hopes to carry on her grandma and dad’s legacy to new generations. She spent her childhood growing up in her dad’s pizzerias, and cherishes everything he has taught her.

“It is healthiest retail pizza in America with each slice offering 6 grams of fat because we don’t use lard like other major chains,” Joe exclaimed. The water and flour are shipped in from Italy to make the pizza. I wouldn’t have believed it if Joe had not had shown me the water and flour boxes in the back kitchen. Italian flour, he let us know, has 80% less gluten than domestic flour and is non GMO. That’s a win win for health conscious Angelenos!

“In that can of tomatoes is a July crop of tomatoes from Italy with no sugar, just crushed tomatoes and oregano. Why would you want tap water in your pizza when most people in LA won’t drink their tap water?” – Joe D’Amore

Joe’s grandmother was world famous for her pizza in Boston opening her first restaurant in 1921. Six months before his grandmother passed away, Joe got all of her original recipes. Joe wasn’t always LA’s beloved pizza man but an actor and his first wife blessed him with three children was a flight attendant. She sadly passed away when the kids were young, and he realized it was time to start a more stable career passion. He married an Italian model 18 years younger who is a big part of the family business still today.

Not only can you find pizza, pasta and classic entrees, the best tiramisu, our favorite meatball subs, and fresh garlic knots, but healthy D’Amore’s hot dogs with meat from from Niman and Harris ranches that is hormone, steroid, and antibiotic free. The health conscious will enjoy the dairy free Broccoli Salad or the Italian soup Stracciatella with meat broth and small shreds of an egg, chicken, and spinach. In summer you can find the classic east coast Lobster Roll. Shrimp pizza or meat and veggies may be your perfect pie, or create your own! The pizza is thin and crisp, and even after sharing a medium pizza, I feel like I could eat another.

This year the D’Amore’s family celebrates 30 years of pizza making in LA. The first store opened in Canoga Park. While you wait for your pizza, it is always fun to view their walls covered with framed photos of Joe, his wife, and daughters like Caroline D’Amore with celebrities they know and who frequent their restaurants.

The D’Amore’s family and daughters run most locations. Their expansion continues as a new 3000 square 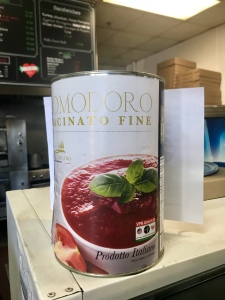 foot sit down restaurant will open soon along the Solvang/Buellton line in the Santa Ynez valley, as well as in Camarillo near the outlets

Find a location or order online.