After a red-eye from Hawaii, and a morning snooze, I motivated my husband to leave our serene pad to venture to what I thought was going to be a relaxed Malibu party in the fields of Saddlerock Ranch. After fighting standstill traffic in the canyons, we knew the rose soiree was close by, but we hoped the unmoving cars were not a sign of a ‘too much vino’ accident.

As the shuttle took us to the ranch property to celebrate the inaugural Rosé Day LA, we knew we had arrived! The grounds were donned in numerous floral and pink themed Instagram-worthy photo opps from perfectly placed lifesize frames to hanging flowers and hip vintage vans. Although a pretty expensive ticket to get in, guests were charged at various bars to buy their own signature rose cocktails.

Los Angeles’s beautiful people in scantily clad white and pastel outfits flitted around this year’s must-attend summer event. We arrived at the tail end in dazed exhaustion feeling like we were back in Coachella, but the crowd reminded me more of nights in Hollywood 8 years ago. I found solace at the VIP bathroom watching the sun glow in the countryside against the horses and wondered if I could escape on a pony.

Celebrity guests bounced around this event including Jeremy Renner, Leonardo DiCaprio, Ashlee Simpson, Evan Ross, Alessandra Ambrosio, and a ‘who’s who’ of Los Angeles’ entertainment, fashion and music communities who partied and celebrated all things Rosé, from Champagnes and Rosé Wines. Guests moved and grooved to the sounds of DJ’s Zen Freeman, Devin Lucien and Caroline D’Amore, while Voss water kept everyone hydrated.

The event’s featured champagne was Moët & Chandon’s Rosé, with Bertaud Belieu serving as the exclusive wine.  Famed “Iron Chef” Marc Forgione curated an exclusive menu, along with gourmet food trucks for the event. “Top Chef” Dakota Weiss was onsite as part of a collaboration with Sweetfin Poké.  In addition, a portion of the proceeds from ticket sales were donated to the event’s charity partner, The Art of Elysium. 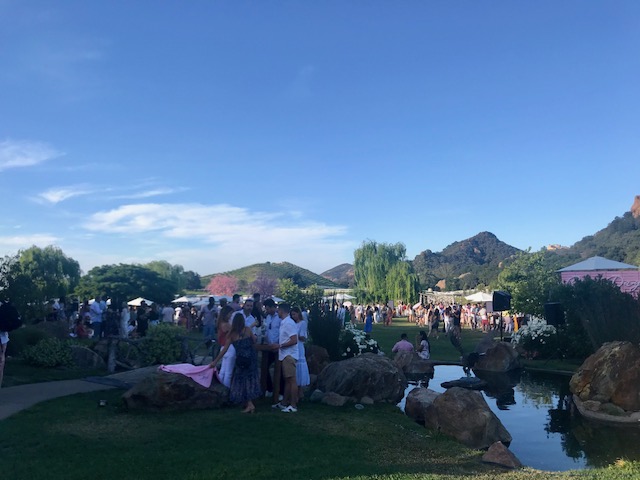