We happened to be in Palm Springs during the Palm Springs Film Festival, but it seems like every weekend in this desert oasis offers special events, from the upcoming Modernism weekend February 16 – 26, to the Taste of Tennis March 6, to Splash House in June and August.

Once a wellness destination in the 1900’s for the dry heat and lavish resorts, then a Hollywood escape in the 1950’s, Palm Springs has evolved into not only a tennis and golf destination, but a fascinating mecca of fun, from mid-century modern architecture, design style, vintage boutiques, spas, live music festivals, historic and hip boutique hotels, hiking opportunities, and exceptional cuisine. A flock of new hotel developments are even on the horizon for 2017.

Did you know Palm Springs is comprised of nine distinctive cities: Palm Springs, Desert Hot Springs, Cathedral City, Rancho Mirage, Palm Desert, Indian Wells, La Quinta, Indio and Coachella? If you leave at the right time, Palm Springs is only a two hour drive from Los Angeles. Relaxation may be why you came, but Palm Springs feels like there is something for everyone. If you have a weekend to stay and play in Palm Springs, we recommend the following highlights to unwind or explore.

Pay attention when booking hotels in Palm Springs because many include resort fees. We enjoyed these two hotels for their quaintness. The properties made us feel like we had the whole place to ourselves.

Often from Los Angeles we venture to Two Bunch Palms in Desert Hot Springs because my boyfriend really enjoys doing nothing and soaking in the natural hot mineral waters, but this time we drove for a weekend to stay at Triada Palm Springs since I won two nights at this historic hotel in the chic Movie Colony neighborhood of Downtown Palm Springs.

Part of the Autograph Collection by Marriott, the Triada is one of 75 independent hotels worldwide. Built in 1939, the Mediterranean style retreat received an 8 million dollar renovation and boasts classic Hollywood  charm. Even old school Hollywood stars like Elizabeth Taylor, Lana Turner, Tyrone Power and Esther Williams have stayed here. Once a private residence, it became the Ambassador Hotel in 1948, then the Alan Ladd’s Spanish Inn in 1972 when Alan Ladd’s widow, Sue Carol Ladd, bought it and named it after her late movie-star husband. It was Alan Ladd’s Spanish Inn until 1982, when it became known as just the Spanish Inn. 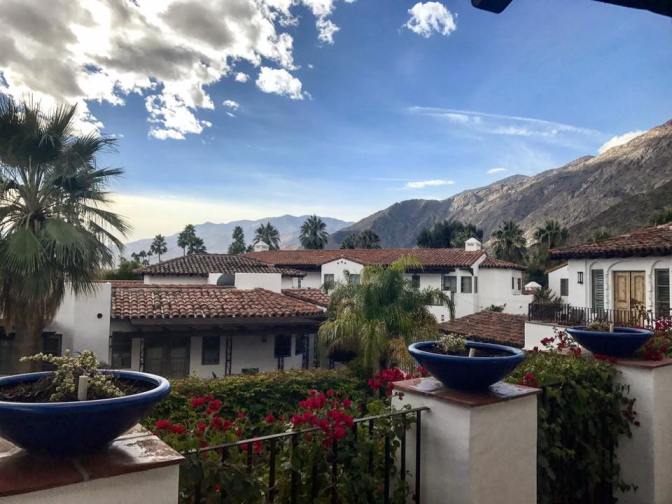 Their 56 unique guest rooms are clean and chic, and we adored our end room for the serenity, especially the majestic views of the San Jacinto Mountains and palms trees in the distance with pink bougainvillea in our window’s foreground.  We loved the location because it was walking distance to vintage stores, art deco design inspiration, the best dining, and other hip and notable hotels.

Since it was January and pretty cold, we didn’t spend much time lounging at the two pools or basic outdoor jacuzzi, but we enjoyed the intimate Spanish hacienda feel and friendly staff. My boyfriend enjoyed the bar downstairs (while I got ready) meeting people from all over the world who were in town for a dog show.

We found an intimate artistic hotel for our last night in Palm Springs that cost about $99 on the Hotel Tonight App. We stayed in the Deluxe Presley, a king suite with a private patio facing the pool. All of the rooms surround the pool with palm trees poking around the property and the mountains as your backdrop. 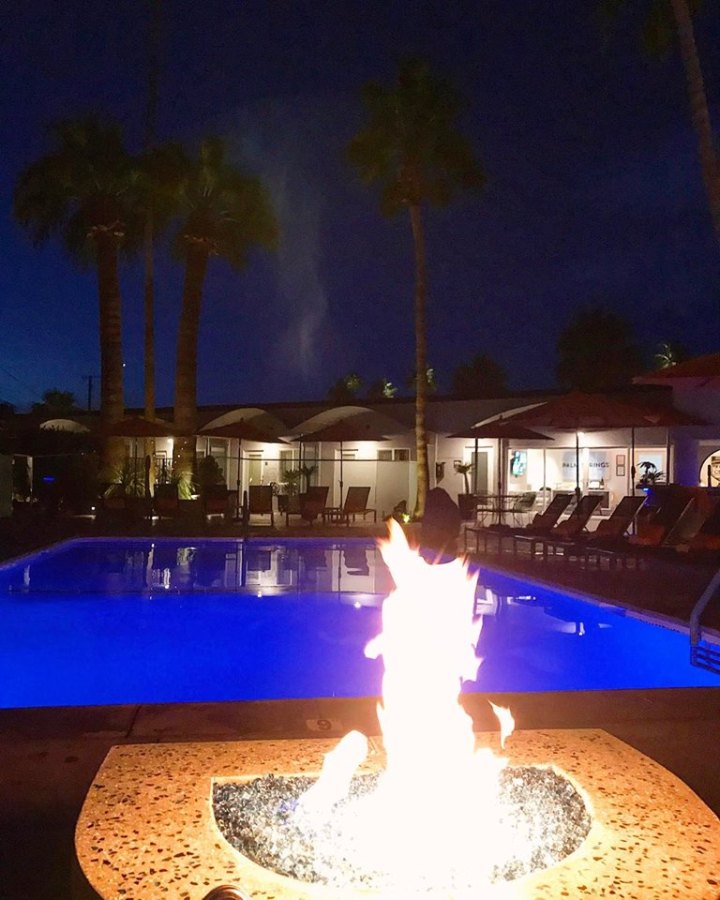 I had one of the best night sleeps ever, even though there was noise from the major street that could be heard at the pool and jacuzzi. The hotel’s room was basic and modern with a huge marble bathroom including a rain shower. Complimentary tea and snacks in the lobby were a nice treat. We enjoyed hanging outside at night under the stars around one of three quiet fire pits with the glowing pool, soaking in the jacuzzi, and watching Apple TV on the flat screen. You can even stream your Netflix account to the tube. Unlike Triada, this hotel had no resort fee.

This casual spot has an outdoor coffee bar perfect for Instagram coffee shots (no pun intended) as well as the fluffiest pancake I have ever sampled made from corn and buttermilk. Start with the bacon sampler for $5 and add a green juice before diving into a medium spicy picture-worthy Bloody Mary.  The 20 minute wait time was worth it. You may enjoy homemade cinnamon rolls, breakfast quesadillas, Chilaquiles, eggs Benedict, Piña Colada waffles, or a spicy pork shoulder dish. 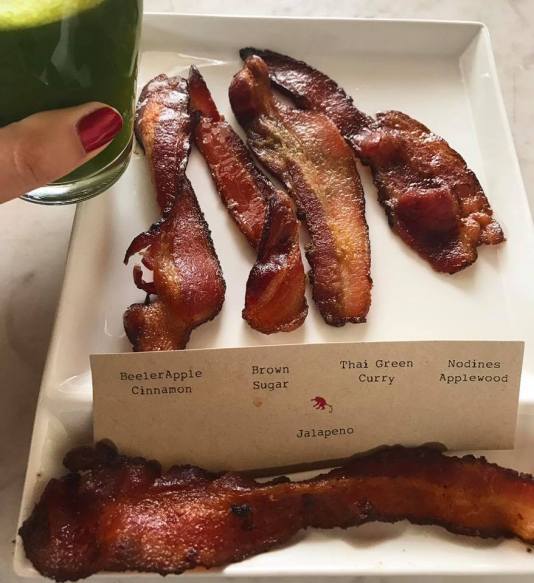 Since 2015 I have been fondly reminiscing in my mind of the Sparrows Lodge since attending a Kiehl’s sponsored bash at this newly opened property during Coachella. We hopped in a $5 uber to return to this rustic lodge. We sipped wine near the serene salt water pool, and basked in the peaceful glory of this carefully designed outdoor bar/lounge/hangout area. Family style dinners are hosted on Saturday nights for $50 at this beautifully-restored 20-room retreat that also offers fire pits, drinks, and real conversation since there are no phones or TV’s in the room. 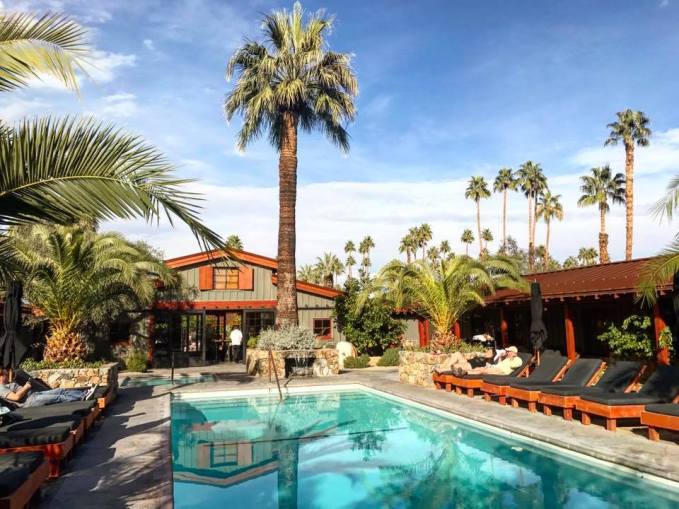 For pre-dinner drinks we walked a few minutes from the Triada to this grown-up sexy historic spot overlooking a lush pool scape that feels like a private old Hollywood getaway. The grounds are truly breathtaking. I felt like I had stumbled upon a secret. Sip libations like the Ginger Fuzz, The Purple Gang, or the Purple Rose poolside, or inside while admiring the intricate garish floors that match the ceiling and the walls at the legendary Purple Palm Restaurant and Bar.

Formerly Carey Grant’s estate, we walked a couple minutes from Triada to this romantic patio restaurant where we ate outside under the stars under heat lamps enjoying a tremendous feast of  Hawaiian Ahi Tacos, Lobster Shrimp Ceviche, Three Cheese Tortellini, and Tomato and Burrata Salad. Smoke a cigar or enjoy the company of other diners afterwards around the giant fire pit in the adjoining yard. 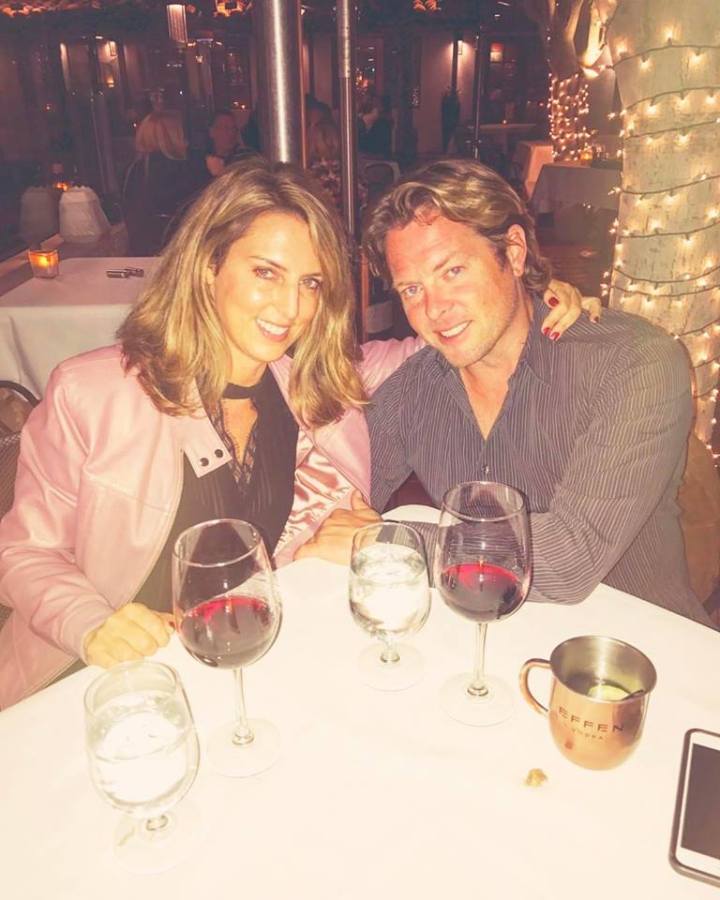 Located within the historic Ingleside Inn, Melvyn’s was the go-to spot for Frank Sinatra, Elizabeth Taylor, and other Hollywood royalty back in the 50’s. A bit hokey and old school Beverly Hill-ish, there is great charm in the piano player singer, and nightly dancing in the piano lounge. Step back in time and admire the old school photographs on the wall of those who came, like a young Arnold and Maria Shriver. There’s a fancy buttoned up dining section too. Sip cocktails and soak up the ambiance.

Downtown and the Movie Colony

Walking around the town is the best way to stumble upon dining, shopping, and entertainment. We also liked getting lost in the Movie Colony neighborhood in the Old Las Palmas area just to admire the ornate doors, Mid-Century Modern design, art deco colors, Spanish style, and the famous California ranch style architecture. Many of the homes were built from 1940 to 2000 and are concealed from view by walls and landscaping. The Movie Colony has around 170 homes and two parks and is centrally located and convenient to downtown Palm Springs. 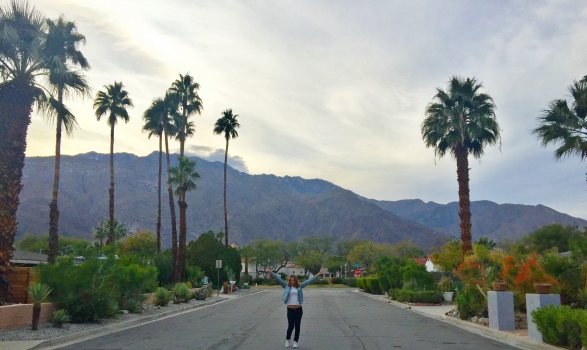 The largest rotating aerial tramway in the world zooms you up the mountain (elevation 8,516 feet) in about ten minutes as you ride past forest, steep mountain cliffs of Chino Canyon, and sweeping views of dusty dry Palm Springs in the distance with even snow greeting you at the top of the Mt. San Jacinto State Park. We saw families heading up with sleds, but it was too cold for us to hike, so we opted for lunch at the Peaks restaurant. We ate salad, a huge bowl of chili and cheese, and sipped Stout Hot Chocolate (made from Chocolate Stout Beer) to stay warm while overlooking the breathtaking views. Apparently the idea for the tramway was born in 1935, but the project came to fruition not until 1963. Also, there are 50 miles of hiking trails. We recommend getting here early, if you don’t want to wait for a couple hours or more. We had passes from the tourism board so we bypassed the wait time by being able to drive to the top and head to the front of the line. Weekday wait time may be better. 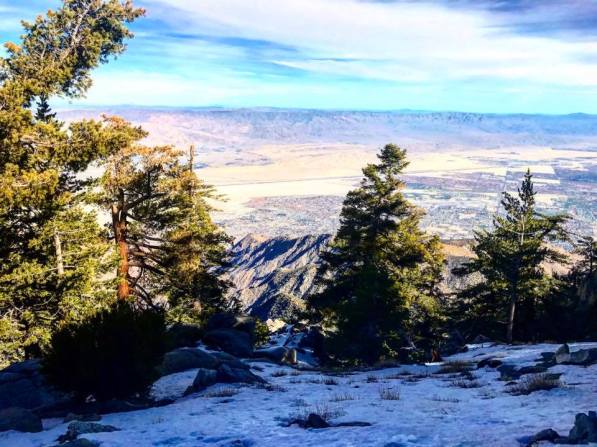 Next time, we hope to take a Palm Springs Modernism Tour since Palm Springs is packed with modern and mid-century architecture or a self-guided tour using the Palm Springs Modern App. There are numerous hikes we learned about, like Tahquitz Canyon (with waterfalls) and Indian Canyons. You may not want to miss the 13 acre luxurious Parker Palm Springs for dining or a hotel stay with its playful colorful Jonathan Adler design.